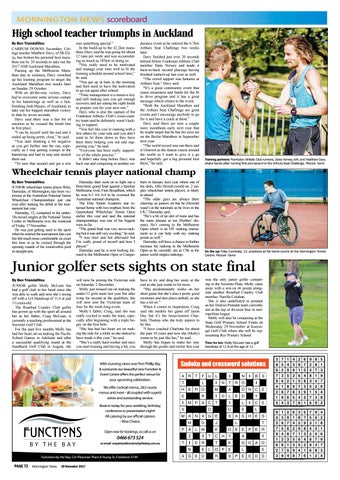 High school teacher triumphs in Auckland By Ben Triandafillou CARRUM DOWNS Secondary College teacher Matthew Davy, of Mt Eliza, has broken his personal best marathon run by 20 seconds to take out the 2017 ASB Auckland Marathon. Passing up the Melbourne Marathon due to sickness, Davy switched up his training program to target the Auckland Marathon two weeks later on Sunday 29 October. With an all-the-way victory, Davy had to overcome some serious cramps in his hamstrings as well as a fastfinishing Josh Maisey, of Auckland, to take out his biggest marathon victory to date by seven seconds. Davy said there was a fair bit of emotion as he crossed the finish line in first place. “I ran by myself until the end and it ended up being pretty close,” he said. “You start thinking a bit negative as you get further into the run, especially as I was getting cramps in the hamstring and had to stop and stretch them out. “To turn that around and get a win

was something special.” In the build-up to the 42.2km marathon, Davy said he was going for about 12 runs per week and was accumulating as much as 185km in doing so. “You really need to be motivated and manage your time well to fit the training schedule around school time,” he said. “You get up at 6am in the morning and then need to have the motivation to go out again after school. “Time management is a massive key and still making sure you get enough recovery and are eating the right foods to prepare you for your next run.” Davy who is also the captain of the Frankston Athletic Club’s cross-country team said he definitely wasn’t lacking in support. “You feel like you’re running with a few others by your side and you don’t want to let them down as they have been there helping you out and supporting you,” he said. “Everyone has been really supportive of the whole process.” It didn’t take long before Davy was back out and competing in another en-

durance event as he entered the 6.7km Arthurs Seat Challenge two weeks later. Davy finished just over 20 seconds behind fellow Frankston Athletic Club member Dane Verwey and made it back-to-back second placings having finished runners-up last year as well. “The crowd support was fantastic at Arthurs Seat,” Davy said. “It’s a great community event that raises awareness and funds for the fit to drive program and it has a great message which relates to the event. “Both the Auckland Marathon and the Arthurs Seat Challenge are great events and I encourage anybody to go for it and have a crack at them.” Davy said there are now a couple more marathons early next year that he might target but he has his eyes set on the Berlin Marathon in September next year. “The world record was run there and it’s known as the fastest course around the world so I want to give it a go and hopefully get a big personal best there,” he said.

Wheelchair tennis player national champ By Ben Triandafillou JUNIOR wheelchair tennis player Riley Dumsday, of Mornington, has been victorious at the Australian National Junior Wheelchair Championships just one year after making his debut in the tournament last year. Dumsday, 12, competed in the under18s mixed singles at the National Tennis Centre in Melbourne over the weekend of Friday 17 November. He was just getting used to the sport when he entered the tournament last year but felt much more comfortable on court this time in as he cruised through the opening rounds of his round-robin pool in straight sets.

Dumsday then went on to fight out a three-hour grand final against a familiar Melbourne rival, Finn Broadbent, which he won 6-1 4-6 6-4 to be crowned the Australian national champion. The Elite Tennis Academy star returned home with two trophies from the Queensland Wheelchair Tennis Open earlier this year and said the national championships was one of his biggest wins so far. “The grand final was very nerve-racking but it was still very exciting,” he said. “I was tired and hot afterward but I’m really proud of myself and how I played.” Dumsday said he is now looking forward to the Melbourne Open in Craigie-

burn in January next year where one of his idols, Alfie Hewett (world no. 2 singles wheelchair tennis player), is likely to attend. “The older guys are always there cheering us juniors on but he (Hewett) wasn’t at the nationals as he lives in the UK,” Dumsday said. “He’s a bit of an idol of mine and has the same disease as me (Perthes’ disease). He’s coming to the Melbourne Open which is an ITF ranking tournament so it can help with my ranking points as well.” Dumsday will have a chance to further increase his ranking at the Melbourne Open as he currently sits at 17th in the junior world singles rankings.

will now be joining the Victorian side on Saturday 2 December. Molly just missed out on making the under-12 girls team last year but after tying for second at the qualifiers, she will now join the Victorian team of four for the week-long event. Molly’s father, Craig, said she was really excited to make the team, especially after beginning with a triple bogey on the first hole. “She has had her heart set on making the side for a while so she stoked to have made it this year,” he said. “She’s a really hard worker and once you start training and having a hit, you

have to try and drag her away at the end as she just wants to hit more. “She predominantly works on her short game but she’s also a pretty good swimmer and also plays netball, so she has a lot on.” When it comes to inspiration, Craig said she models her game off Jason Day but it’s the lesser-known Charlotte Thomas who she truly aspires to be like. “I have coached Charlotte for about the past 10 years and now she (Molly) wants to be just like her,” he said. Molly has begun to make her way through the grades and earlier this year

On the up: Riley Dumsday, 12, practices at his home courts at the Mornington Tennis Centre. Picture: Yanni

Junior golfer sets sights on state final By Ben Triandafillou JUNIOR golfer Molly McLean has had a golf club in her hand since she was able to walk and now she’s teeing off with a GA Handicap of 11.6 at just 11-years-old. The Rosebud Country Club golfer has grown up with the sport all around her as her father, Craig McLean, is currently a teaching professional at the Sorrento Golf Club. For the past five months Molly has had her heart set on making the Pacific School Games in Adelaide and after a successful qualifying round at the Sandhurst Golf Club in August, she

was the only junior golfer competing in the Sorrento Plate. Molly came away with a win on 46 points alongside another Rosebud Country Club member, Narelle Colahan. She is also undefeated in pennant as her District Pennant team currently sits at the top of division four in metropolitan league. Molly will also be competing at the State Golf Primary School Finals on Wednesday 29 November at Kooringal Golf Club where she will be representing Rye Primary School. Time for tee: Molly McLean has a golf handicap of 11.6 at the age of 11.