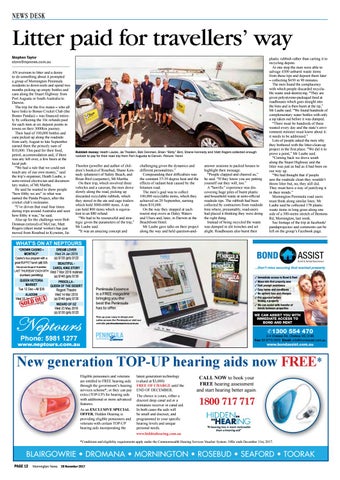 Litter paid for travellers’ way Stephen Taylor steve@mpnews.com.au AN aversion to litter and a desire to do something about it prompted a group of Mornington Peninsula residents to down tools and spend two months picking up empty bottles and cans along the Stuart Highway from Port Augusta in South Australia to Darwin. The trip for the five mates – who all have links to Boneo Cricket Club (the Boneo Pandas) – was financed entirely by collecting the 10c refunds paid for each item at six deposit points in towns on their 3000km journey. Their haul of 100,000 bottles and cans picked up along the roadside from early August to late September earned them the princely sum of $10,000. This paid for their food, petrol, accommodation and, if there was any left over, a few beers at the local pub. “We had a rule that we could not touch any of our own money,” said the trip’s organiser, Heath Laube, a semi-retired electrician and documentary maker, of Mt Martha. He said he wanted to show people “how filthy we are” in what was named the Panda Project, after the cricket club’s nickname. “I’ve driven that road four times during trips around Australia and seen how filthy it was,” he said. Also up for the challenge were Bob Denman (retired) of McCrae, Matt Rogers (sheet metal worker) has just moved from Rosebud to Kyneton, Jai

Thoolen (jeweller and author of children’s books) of Rosebud, Shane Kennedy (plasterer) of Safety Beach, and Brian Bird (carpenter), Mt Martha. On their trip, which involved three vehicles and a caravan, the men drove slowly along the road, picking up discarded recyclable rubbish, which they stored in the ute and cage trailers which hold 3000-6000 items. A ute can hold 800 items which is equivalent to an $80 refund. “We had to be resourceful and strategic given the parameters of the trip,” Mr Laube said. “It was an amazing concept and

challenging given the dynamics and different personalities.” Compounding their difficulties was the constant 37-39 degree heat and the effects of radiant heat caused by the bitumen road. The men’s goal was to collect 100,000 recyclable items, which they achieved on 20 September, earning them $10,000. On the way they stopped at such tourist stop overs as Daley Waters and Uluru and, later, in Darwin at the Beachfront Hotel. Mr Laube gave talks on their project along the way and held question-and-

answer sessions to packed houses to highlight their message. “People clapped and cheered us,” he said. “If they know you are putting yourself out they will, too.” A “horrific” experience was discovering huge piles of burnt plastic and household waste at semi-official roadside tips. The rubbish had been collected by contractors from roadside bins where, presumably, road-users had placed it thinking they were doing the right thing. Instead of being recycled the waste was dumped in slit trenches and set alight. Roadhouses also burnt their

plastic rubbish rather than carting it to recycling depots. At one stop the men were able to salvage 4500 unburnt waste items from these tips and deposit them later – collecting $450 in 90 minutes. The men found the complacency with which people discarded recyclable waste soul-destroying. “They are given polystyrene-packaged food at roadhouses which goes straight into the bins and is then burnt at the tip,” Mr Laube said. “We found hundreds of complementary water bottles with only a sip taken out before it was dumped. “There must be hundreds of these wasted every day and the state’s environment minister must know about it: it needs to be addressed.” Lots of people asked the men why they bothered with the litter-clean-up project in the first place. “We did it to prove a point,” Mr Laube said. “Coming back we drove south along the Stuart Highway and the litter was just as bad as it had been on our way up. “We had thought that if people saw the roadside clean they wouldn’t throw litter but, no, they still did. They must have a way of justifying it in their minds.” Mornington Peninsula road users must think along similar lines: Mr Laube said he collected 178 plastic waste items in long grass along one side of a 500-metre stretch of Bentons Rd, Mornington, last week. See footage of the trip at facebook/ pandaprojectoz and comments can be left on the group’s Facebook page.

Casino’s bus program with a great BUFFET lunch (all) $35. Only p/p over the age of 18 permitted.

PRISCILLA QUEEN OF THE DESERT

latest generation technology (valued at $3,000) FREE OF CHARGE until the END OF DECEMBER.