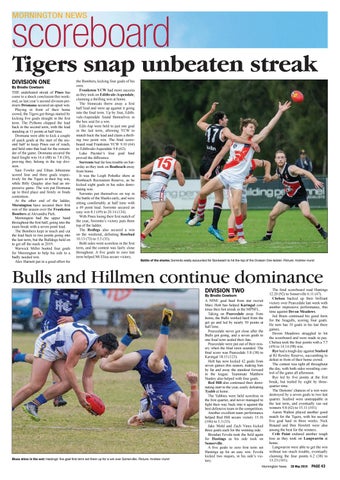 By Brodie Cowburn THE undefeated streak of Pines has come to a shock conclusion this weekend, as last year’s second division premiers Dromana secured an upset win. Playing in front of their home crowd, the Tigers got things started by kicking five goals straight in the first term. The Pythons chipped the lead back in the second term, with the lead standing at 11 points at half time. Dromana were able to kick a couple of quick goals at the start of the second half to keep Pines out of reach, and held onto that lead for the remainder of the game. Dromana secured the hard fought win 14.4 (88) to 7.8 (50), proving they belong in the top division. Sam Fowler and Ethan Johnstone scored four and three goals respectively for the Tigers in their big win, while Billy Quigley also had an impressive game. The win put Dromana up to third place and firmly in finals contention. At the other end of the ladder, Mornington have secured their first win of the season over the Frankston Bombers at Alexandra Park. Mornington had the upper hand throughout the first half, going into the main break with a seven point lead. The Bombers kept in touch and cut the lead back to two points going into the last term, but the Bulldogs held on to get off the mark in 2019. Warwick Miller booted four goals for Mornington to help his side to a badly needed win. Alex Harnett put in a good effort for

the Bombers, kicking four goals of his own. Frankston YCW had more success as they took on Edithvale-Aspendale, claiming a thrilling win at home. The Stonecats threw away a first half lead and were up against it going into the final term. Up by four, Edithvale-Aspendale found themselves in the box seat for a win. Edit-Asp were held to just one goal in the last term, allowing YCW to snatch back the lead and claim a thrilling two point win. The final scoreboard read Frankston YCW 9.10 (64) to Edithvale-Aspendale 9.8 (62). Luke Paynter’s four goal haul proved the difference. Sorrento had far less trouble on Saturday as they took on Bonbeach away from home. It was the Leigh Poholke show at Bonbeach Recreation Reserve, as he kicked eight goals in his sides dominating win. Sorrento put themselves on top in the battle of the Sharks early, and were sitting comfortably at half time with a 49 point lead. Sorrento secured an easy win 8.1 (49) to 20.14 (134). With Pines losing their first match of the year, Sorrento’s victory puts them top of the ladder. The Redlegs also secured a win on the weekend, defeating Rosebud 10.13 (73) to 5.5 (35). Both sides went scoreless in the first term, and the contest was fairly close throughout. A five goals to zero last term helped Mt Eliza secure victory.

Battle of the sharks: Sorrento easily accounted for Bonbeach to hit the top of the Division One ladder. Picture: Andrew Hurst

Blues shine in the wet: Hastings’ five goal first term set them up for a win over Somerville. Picture: Andrew Hurst

By Brodie Cowburn A NINE goal haul from star recruit Marc Holt has helped Karingal continue their hot streak in the MPNFL. Taking on Pearcedale away from home, the Bulls worked hard from the get go and led by nearly 50 points at half time. Pearcedale never got close after the Bulls got going, and a seven goals to one final term sealed their fate. Pearcedale were put out of their misery when the final siren sounded. The final score was Pearcedale 5.8 (38) to Karingal 18.15 (123). Holt has now kicked 42 goals from seven games this season, making him by far and away the standout forward in the league. Teammate Matthew Stanley also helped with four goals. Red Hill also continued their dominating start to the year, easily defeating Tyabb at home. The Yabbies were held scoreless in the first quarter, and never managed to fight their way back into it against the best defensive team in the competition. Another excellent team performance helped Red Hill secure victory 15.16 (106) to 5.3 (33). Jake Mold and Zach Vines kicked three goals each for the winning side. Brendan Fevola took the field again for Hastings as his side took on Somerville. A five goals to zero first term set Hastings up for an easy win. Fevola kicked two majors, in his side’s victory.

The final scoreboard read Hastings 12.20 (92) to Somerville 6.11 (47). Chelsea backed up their brilliant victory over Pearcedale last week with another impressive performance, this time against Devon Meadows. Jed Brain continued his good form for the Seagulls, scoring four goals. He now has 10 goals in his last three games. Devon Meadows struggled to hit the scoreboard and were made to pay. Chelsea took the four points with a 7.7 (49) to 14.14 (98) win. Rye had a tough day against Seaford at RJ Rowley Reserve, succumbing to defeat in front of their home crowd. The contest was tight all throughout the day, with both sides wrestling control of the game all afternoon. Rye led by five points at the first break, but trailed by eight by threequarter time. The Demons’ chances of a win were destroyed by a seven goals to two last quarter. Seaford were unstoppable in the last term, and eventually ran out winners 9.8 (62) to 15.11 (101). Aaron Walton played another good match for the Tigers, with his second five goal haul in three weeks. Nick Braund and Ben Howlett were also among the best for the winners. Crib Point endured another tough loss as they took on Langwarrin at home. Langwarrin were able to get the win without too much trouble, eventually claiming the four points 6.2 (38) to 13.23 (101).