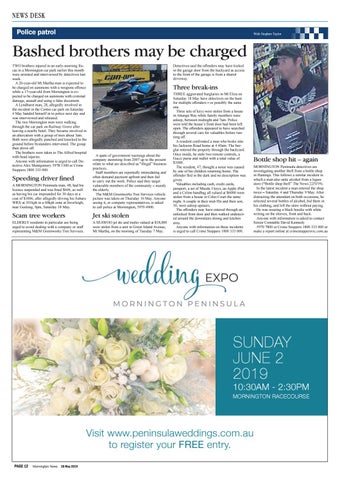 Bashed brothers may be charged TWO brothers injured in an early-morning fracas in a Mornington car park earlier this month were arrested and interviewed by detectives last week. A 20-year-old Mt Martha man is expected to be charged on summons with a weapons offence while a 17-year-old from Mornington is expected to be charged on summons with criminal damage, assault and using a false document. A Lyndhurst man, 28, allegedly involved in the incident in the Centro car park on Saturday 4 May handed himself in to police next day and was interviewed and released. The two Mornington men were walking through the car park on Railway Grove after leaving a nearby hotel. They became involved in an altercation with a group of men about 3am. Both were allegedly punched and knocked to the ground before bystanders intervened. The group then drove off. The brothers were taken to The Alfred hospital with head injuries. Anyone with information is urged to call Detective Alex Montgomery 5978 1300 or Crime Stoppers 1800 333 000.

Detectives said the offenders may have kicked in the garage door from the backyard as access to the front of the garage is from a shared driveway.

A MORNINGTON Peninsula man, 48, had his licence suspended and was fined $604, as well as having his car impounded for 30 days at a cost of $1006, after allegedly driving his Subaru WRX at 101kph in a 60kph zone at Inverleigh, near Geelong, 9pm, Saturday 18 May.

A spate of government warnings about the company stemming from 2007 up to the present relate to what are described as “illegal” business practices. Staff members are reportedly intimidating and often demand payment upfront and then fail to carry out the work. Police said they target vulnerable members of the community – mainly the elderly. The M&amp;M Greenworks Tree Services vehicle picture was taken on Thursday 16 May. Anyone seeing it, or company representatives, is asked to call police at Mornington, 5970 4900.

ELDERLY residents in particular are being urged to avoid dealing with a company or staff representing M&amp;M Greenworks Tree Services.

A SEAWOO jet ski and trailer valued at $18,000 were stolen from a unit in Green Island Avenue, Mt Martha, on the morning of Tuesday 7 May.

THREE aggravated burglaries in Mt Eliza on Saturday 18 May have detectives on the hunt for multiple offenders – or possibly the same one. Three sets of keys were stolen from a house in Attunga Way while family members were asleep, between midnight and 7am. Police were told the house’s front door had been left open. The offenders appeared to have searched through several cars for valuables before running off. A resident confronted a man who broke into his Jacksons Road home at 4.40am. The burglar entered the property through the backyard. Once inside, he stole two remote controls, a Gucci purse and wallet with a total value of $1000. The resident, 47, thought a noise was caused by one of his children returning home. The offender fled in the dark and no description was given. Valuables including cash, credit cards, passport, a set of Mazda 3 keys, an Apple iPad and a Celine handbag all valued at $6000 were stolen from a house in Coles Court the same night. A couple in their mid-50s and their son, 30, were asleep upstairs. The offenders may have entered through an unlocked front door and then walked undetected around the downstairs dining and kitchen area. Anyone with information on these incidents is urged to call Crime Stoppers 1800 333 000.

Bottle shop hit – again MORNINGTON Peninsula detectives are investigating another theft from a bottle shop in Hastings. This follows a similar incident in which a man also stole alcohol from a liquor store (“Bottle shop theft” The News 22/5/19). In the latest incident a man entered the shop twice – Saturday 4 and Thursday 9 May. After distracting the attendant on both occasions, he selected several bottles of alcohol, hid them in his clothing, and left the store without paying. He was wearing a black hoodie with white writing on the sleeves, front and back. Anyone with information is asked to contact Senior Constable David Kennedy 5970 7800 or Crime Stoppers 1800 333 000 or make a report online at crimestoppersvic.com.au