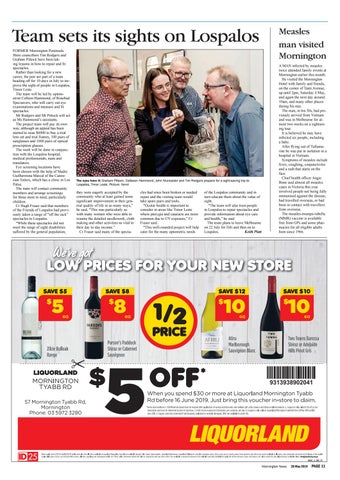 Team sets its sights on Lospalos FORMER Mornington Peninsula Shire councillors Tim Rodgers and Graham Pittock have been taking lessons in how to repair and fit spectacles. Rather than looking for a new career, the pair are part of a team heading off for 10 days in July to improve the sight of people in Lospalos, Timor Leste. The team will be led by optometrist Colleen Hammond, of Rosebud Specsavers, who will carry out eye examinations and measure and fit spectacles. Mr Rodgers and Mr Pittock will act as Ms Hammond’s assistants. The project team will pay its own way, although an appeal has been started to raise $6000 to buy a trial lens set and trial frames, 100 pairs of sunglasses and 1000 pairs of optical prescription glasses. The work will be done in conjunction with the Lospalos hospital, medical professionals, nuns and translators. Eye screening locations have been chosen with the help of Madre Guilhermina Marcal of the Canossian Sisters, which has a clinic in Los Palos. The nuns will contact community members and arrange screenings for those most in need, particularly children. Cr Hugh Fraser said that members of the Friends of Lospalos had previously taken a range of “off the rack” spectacles to Lospalos. “While these spectacles did not meet the range of sight disabilities suffered by the general population,

they were eagerly accepted by the community who at least gained some significant improvement in their general quality of life in so many ways,” he said. “This was particularly so with many women who were able to resume the detailed needlework, cloth making and other activities so vital to their day to day income.” Cr Fraser said many of the specta-

cles had since been broken or needed repair and the visiting team would take spare pairs and tools. “Ocular health is important to consider in areas like Timor Leste where pterygia and cataracts are more common due to UV exposure,” Cr Fraser said. “This well-rounded project will help cater for the many optometric needs

of the Lospalos community and in turn educate them about the value of sight. “The team will also train people in Lospalos to repair spectacles and provide information about eye care and health,” he said. The team plans to leave Melbourne on 22 July for Dili and then on to Lospalos. Keith Platt

Measles man visited Mornington A MAN infected by measles twice attended family events at Mornington earlier this month. He visited the Mornington Hotel with family and friends, on the corner of Tanti Avenue, up until 2pm, Saturday 4 May, and again the next day around 10am, and many other places during his stay. The man, in his 30s, had previously arrived from Vietnam and was in Melbourne for almost two weeks on a sightseeing tour. It is believed he may have infected six people, including a baby. After flying out of Tullamarine he was put in isolation in a hospital in Vietnam. Symptoms of measles include fever, coughing, conjunctivitis and a rash that starts on the face. Chief health officer Angie Bone said almost all measles cases in Victoria this year involved people not being fully immunised against the disease, had travelled overseas, or had been in contact with travellers from overseas. The measles-mumps-rubella (MMR) vaccine is available free from GPs and some pharmacies for all eligible adults born since 1966.