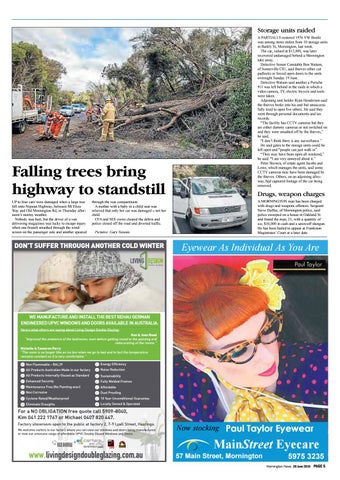 Storage units raided A PARTIALLY-restored 1976 VW Beetle was among items stolen from 10 storage units in Barkly St, Mornington, last week. The car, valued at $15,000, was later recovered undamaged behind a Mornington take away. Detective Senior Constable Ben Watson, of Somerville CIU, said thieves either cut padlocks or forced open doors to the units overnight Sunday 19 June. Detective Watson said another a Porsche 911 was left behind in the raids in which a video camera, TV, electric bicycle and tools were taken. Adjoining unit holder Ryan Henderson said the thieves broke into his unit but unsuccessfully tried to open five others. He said they went through personal documents and tax records. “The facility has CCTV cameras but they are either dummy cameras or not switched on and they were smashed off by the thieves,” he said. “I don’t think there is any surveillance.” He said gates to the storage units could be left open and “people can just walk in”. “They may have been open all weekend,” he said. “I am very annoyed about it.” Peter Skewes, of estate agent Jacobs and Lowe, which manages the units, said some CCTV cameras may have been damaged by the thieves. Others, on an adjoining alleyway, had captured footage of the car being removed.

Falling trees bring highway to standstill UP to four cars were damaged when a large tree fell onto Nepean Highway, between Mt Eliza Way and Old Mornington Rd, in Thursday afternoon’s stormy weather. Nobody was hurt, but the driver of a van delivering magazines was lucky to escape injury when one branch smashed through the windscreen on the passenger side and another speared

Drugs, weapon charges A MORNINGTON man has been charged with drugs and weapons offences. Sergeant Steve Duffee, of Mornington police, said police swooped on a house in Oakland St and found the man, 21, with a quantity of ice, $10,000 in cash and a sawn-off shotgun. He has been bailed to appear at Frankston Magistrates’ Court at a later date.

through the rear compartment. A mother with a baby in a child seat was relieved that only her car was damaged – not her child. CFA and SES crews cleared the debris and police closed off the road and diverted traffic. Pictures: Gary Sissons

For a NO OBLIGATION free quote call 5909−8040, Kim 041 222 1767 or Michael 0407 820 447. Factory showroom open to the public at factory 2, 7-9 Lyall Street, Hastings. We welcome visitors to our factory where you can view our windows and doors being manufactured or view our extensive range of affordable UPVC Double Glazed Windows and Doors.