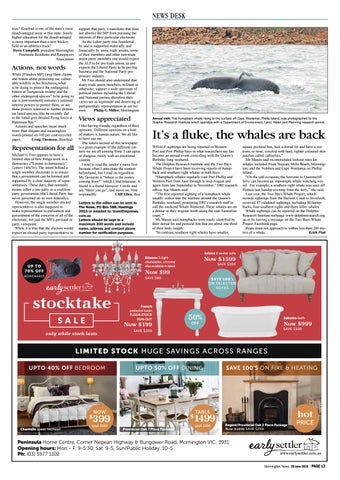 NEWS DESK ities? Rosebud is one of the state’s most disadvantaged areas in this state. Surely higher education for the disadvantaged is more important than a new hockey field or an athletics track? Doris Campbell, president Mornington Peninsula Residents and Ratepayers Association

Actions, not words While [Flinders MP] Greg Hunt claims and boasts about protecting our vulnerable wildlife in his brochures, what is he doing to protect the endangered bittern at Tootgarook swamp and the other endangered species? Is he going to use is [environment] minister’s national interest powers to protect them, or are those powers reserved to further demonise listed species, like he recently did to the listed grey-headed flying foxes at Batemans Bay? Actions and speeches mean much more than slogans and meaningless words printed on 100 per cent recycled paper. Craig Thomson, Rosebud

Representation for all Michael G Free appears to have a limited idea of how things work in a democracy (“Lesson in democracy”, Letters 14/6/16). The intent behind a single member electorate is to ensure that a government can be formed and supported by a clear majority of representatives. These days, that normally means either a one party or a coalition party government (the Liberal Party has never governed on its own federally). However, the single member elected representative is also supposed to make representation to parliament and government of the concerns of all of the electorate, not just the MP’s personal or party viewpoint. While it is true that the electors would expect an elected party representative to

support that party’s manifesto that does not absolve the MP from pursuing the interests of their particular electorate. As the Labor party was foundered by and is supported materially and financially by some trade unions, some of their members and other non-trade union party members one would expect the ALP to be pro trade union, as one expects the Liberal Party to be pro big business and the National Party pro primary industry. Mr Free should also understand that many trade union members, militant or otherwise, support a wide spectrum of political parties including the Liberal and National parties, therefore their views are as legitimate and deserving of parliamentary representation as are his own. Philip G Miller, Mornington

Annual visit: This humpback whale rising to the surface off Cape Woolamai, Phillip Island, was photographed by the Dolphin Research Institute which operates with a Department of Environment, Land, Water and Planning research permit.

I like having friends, regardless of their opinions. Different opinions on a host of matters is human nature. We all like to have our say. The letters section of this newspaper is a great example of the different corners we are all coming from. I can agree or disagree, rarely with an emotional content. I tend to read the sender’s name first because often I anticipate the content beforehand, but I read on regardless. My favourite is “where is the money coming from?” which I find hilarious. A friend is a friend however. I smile and say “there you go”, and move on. Vote responsibly. Cliff Ellen, Rye

It’s a fluke, the whales are back WHALE sightings are being reported in Western Port and Port Phillip bays in what researchers say has become an annual event coinciding with the Queen’s Birthday long weekend. The Dolphin Research Institute and the Two Bays Whale Project have been receiving reports of humpback and southern right whales in both bays. “Humpback whales regularly visit Port Phillip and Western Port from June through to mid-August and again from late September to November,” DRI research officer Sue Mason said. “The first reported sighting of a humpback whale usually comes into the institute around the Queen’s Birthday weekend, prompting DRI’s research staff to call the weekend Whale Weekend. These whales are on a detour as they migrate north along the east Australian coast. “ Ms Mason said humpbacks were easily identified by their dorsal fin and pectoral fins that are about one third of their body length. “In contrast, southern right whales have smaller,

Letters to the editor can be sent to The News, PO Box 588, Hastings 3915 or emailed to: team@mpnews. com.au Letters should be kept to a maximum 300 words and include name, address and contact phone number for verification purposes.

square pectoral fins, lack a dorsal fin and have a rostrum, or nose, covered with hard, lighter coloured skin patches called callosities.” Ms Mason said recommended lookout sites for whales included Point Nepean, Mills Beach, Mornington, and the Nobbies and Cape Woolamai on Phillip Island. “On the odd occasion, the Sorrento to Queenscliff ferry can become an impromptu whale watching vessel. For example, a southern right whale was seen off Portsea last Sunday evening from the ferry,” she said. Last year, the Two Bays Whale Project, which records sightings from the Barwon Coast to Inverloch, received 87 validated sightings, including 80 humpbacks, four southern rights and three killer whales. Whale sightings can be reported on the Dolphin Research Institute webpage www.dolphinresearch.org. au or be leaving a message on the Two Bays Whale Project Facebook page. Boats must not approach to within less than 200 meters of a whale. Keith Platt

Now $199 only while stock lasts