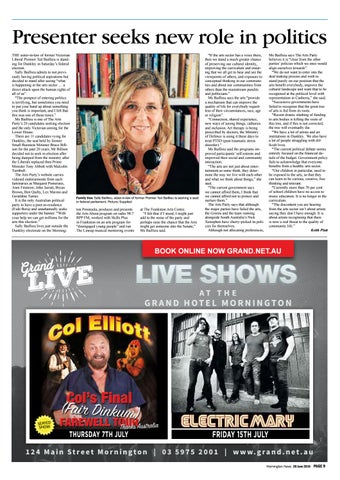 Presenter seeks new role in politics THE sister-in-law of former Victorian Liberal Premier Ted Baillieu is standing for Dunkley in Saturday’s federal election. Sally Baillieu admits to not previously having political aspirations but decided to stand after seeing “what is happening in the arts sector … a direct attack upon the human rights of all of us”. “The prospect of entering politics is terrifying, but sometimes you need to put your hand up about something you think is important, and I felt that this was one of those times.” Ms Baillieu is one of The Arts Party’s 20 candidates seeking election and the only Victorian aiming for the Lower House. There are 11 candidates vying for Dunkley, the seat held by former Small Business Minister Bruce Billson for the past 20 years. Mr Billson decided not to seek re-election after being dumped from the ministry after the Liberals replaced then Prime Minister Tony Abbott with Malcolm Turnbull. The Arts Party’s website carries videoed endorsements from such luminaries as Margaret Pomeranz, Anni Finsterer, John Jarratt, Bryan Brown, Ben Quilty, Lex Marino and Geraldine Turner. It is the only Australian political party to have a poet-in-residence (Eido Boru) and unashamedly seeks supporters under the banner: “With your help we can get millions for the arts this election.” Sally Baillieu lives just outside the Dunkley electorate on the Morning-

ton Peninsula, produces and presents the Arts About program on radio 98.7 RPP FM, worked with Skills Plus in Frankston on an arts program for “disengaged young people” and run The Lineup musical mentoring events

at The Frankston Arts Centre. “I felt that if I stood, I might just add to the noise of the party and perhaps raise the chance that the Arts might get someone into the Senate,” Ms Baillieu said.

Ms Baillieu says The Arts Party believes it is “clear from the other parties’ policies which we ones would align ourselves towards”. “We do not want to enter into the deal making process and wish to stand purely on our position that the arts benefit everybody, improve the cultural landscape and want that to be recognised at the political level with representation in Canberra,” she said. “Successive governments have failed to recognise that the great tree of arts is fed from its roots. “Recent drastic slashing of funding to arts bodies is killing the roots of this tree, and if this is not corrected, the tree will eventually die. “We have a lot of artists and art institutions in Dunkley. We also have a lot of people struggling with difficult lives. “The current political debate seems entirely focused on the financial details of the budget. Government policy fails to acknowledge that everyone benefits from a healthy arts sector. “Our children in particular, need to be exposed to the arts, so that they can learn to be curious, creative, free thinking and tolerant. “Currently more than 70 per cent of school children have no access to music education. It is no longer in the curriculum. “The discontent you are hearing from the arts sector isn’t about artists saying they don’t have enough. It is about artists recognising that there is now a real threat to the quality of community life.” Keith Platt

“If the arts sector has a voice there, then we stand a much greater chance of preserving our cultural identity, improving the curriculum and ensuring that we all get to hear and see the viewpoints of others, and exposure to conceptual thinking in our communities and about our communities from others than the mainstream pundits and politicians.” Ms Baillieu says the arts “provide a mechanism that can improve the quality of life for everybody regardless of their circumstances, race, age or religion”. “Connection, shared experience, new ways of seeing things, catharsis and inclusion. Art therapy is being prescribed by doctors, the Ministry of Defence is using it these days to treat PTSD (post traumatic stress disorder).” Ms Baillieu said the programs improved participants’ self-esteem and improved their social and community interaction. “The arts are not just about entertainment as some think, they determine the way we live with each other and what we think about things,” she said. “The current government says we cannot afford them, I think that we cannot afford not to protect and nurture them.” The Arts Party says that although the major parties have failed the arts, the Greens and the team running alongside South Australia’s Nick Xenophon have cherry-picked its policies for themselves. Although not allocating preferences,