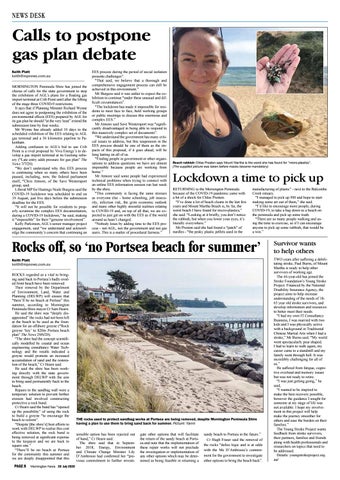 Calls to postpone gas plan debate Keith Platt keith@mpnews.com.au MORNINGTON Peninsula Shire has joined the chorus of calls for the state government to stop the exhibition of AGL’s plans for a floating gas import terminal at Crib Point until after the lifting of the stage three COVID-9 restrictions. It says that if Planning Minister Richard Wynne does not agree to postponing the exhibition of the environmental effects (EES) prepared by AGL for its gas plan he should “at the very least” extend the submission time by four weeks. Mr Wynne has already added 10 days to the scheduled exhibition of the EES relating to AGL gas terminal and a 56 kilometre pipeline to Pakenham. Adding confusion to AGL’s bid to use Crib Point is a rival proposal by Viva Energy’s to develop a gas import terminal at its Geelong refinery (“Late entry adds pressure for gas plan” The News 7/7/20). “We don’t understand why this EES process is continuing when so many others have been paused, including, now, the federal parliament itself, “Chris Atmore, of the Save Westernport group, said. Liberal MP for Hastings Neale Burgess said the COVID-19 lockdown was scheduled to end on 19 August, just five days before the submission deadline for the EES. “It will not be possible for residents to properly scrutinise the complex EES documentation, during a COVID-19 lockdown,” he said, making it “impossible” for their “genuine involvement”. Kelly Parkinson, AGL’s senior manager project engagement, said “we understand and acknowledge the community’s concern that continuing an

EES process during the period of social isolation presents challenges”. “That said, we believe that a thorough and comprehensive engagement process can still be achieved in this environment.” Mr Burgess said it was unfair to expect the exhibition to continue “under these unusual and difficult circumstances”. “The lockdown has made it impossible for residents to meet face to face, hold working groups or public meetings to discuss this enormous and complex EES.” Mr Atmore said Save Westernport was “significantly disadvantaged in being able to respond to this massively complex set of documents”. “We understand the government has many critical issues to address, but this suspension in the EES process should be one of them as the impacts of this proposal, if it goes ahead, will be long lasting on all of us. “Finding people in government or other organisations to address questions we have are almost impossible because people are working from home.” Mr Atmore said some people had experienced technical problems when trying to connect with an online EES information session run last week by the shire. “This community is facing the same stresses as everyone else - home schooling, job insecurity, infection risk, the grim economic outlook and many other highly stressful realities relating to COVID-19 and, on top of all that, we are expected to just get on with the EES as if the world around us hasn’t changed. “Nobody loses by adding time to the EES process - not AGL, not the government and not gas users. This is a matter of procedural fairness.”

Beach rubbish: Chloe Preston says Mount Martha is the worst she has found for “micro-plastics”. (The supplied picture was taken before masks became mandatory)

Lockdown a time to pick up RETURNING to the Mornington Peninsula because of the COVID-19 pandemic came with a bit of a shock for Chloe Preston. “I’ve done a lot of beach cleans in the last few years and Mount Martha Beach is, by far, the worst beach I have found for micro-plastics,” she said. “Looking at it briefly, you don’t notice the rubbish, but when you lower your eyes, it’s literally everywhere.” Ms Preston said she had found a “patch” of nurdles - “the pesky plastic pellets used in the

manufacturing of plastic” - next to the Balcombe Creek estuary. “I managed to pick up 500 and hope to start making some art out of them,” she said. “I’d like to encourage more people, during COVID-19, to take a bag down to a beach on the peninsula and pick up some trash. “There are so many people walking and using the time to exercise, so if I can encourage anyone to pick up some rubbish, that would be a win.”

Rocks off, so ‘no Portsea beach for summer’

Survivor wants to help others

TWO years after suffering a debilitating stroke, Paul Burns, of Mount Martha is ready to help other survivors of working age. The 44-year-old has joined the Stroke Foundation’s Young Stroke Project. Financed by the National Disability Insurance Agency, the project aims to help increase understanding of the needs of 1865 year old stroke survivors, and develop information and resources to better meet their needs. “I had my own IT Consultancy Business, I was married with two kids and I was physically active with a background in Traditional Chinese Martial Arts when I had a stroke,” Mr Burns said. “My world went spectacularly pear shaped. I had to learn to walk again, my career came to a standstill and my family went through hell. It was incredibly challenging for all of us.” He suffered from fatigue, cognitive overload and memory issues but was not ready to retire. “I was just getting going,’’ he said, “I wanted to be inspired to make the best recovery possible, however the guidance I sought for someone at my stage of life was not available. I hope my involvement in this project will help make the journey smoother for others and ease the burden on their families.” The Young Stroke Project wants feedback from stroke survivors, their partners, families and friends along with health professionals and researchers on topics that need to be addressed. Details: youngstrokeproject.org. au/

ROCKS regarded as a vital to bringing sand back to Portsea’s badly eroded front beach have been removed. Their removal by the Department of Environment, Land, Water and Planning (DELWP) will ensure that “there’ll be no beach at Portsea” this summer, according to Mornington Peninsula Shire mayor Cr Sam Hearn. He said the shire was “deeply disappointed” the rocks had not been left at the beach to be used as the foundation for an offshore groyne (“Rock groyne ‘key’ to $20m Portsea beach plan” The News 29/6/20). “The shire had the concept scientifically modelled by coastal and ocean engineering consultancy Water Technology and the results indicated a groyne would promote an increased accumulation of sand and the restoration of the beach,” Cr Hearn said. He said the shire has been working directly with the state government through DELWP with the aim to bring sand permanently back to the beach. Repairs to the sandbag wall were a temporary solution to prevent further erosion had involved constructing protective a rock bund. Cr Hearn said the bund has “opened up the possibility” of using the rock to build a groyne “to encourage the beach to reform”. “Despite [the shire’s] best efforts to work with DELWP to realise this cost effective solution, the rock bund is being removed at significant expense to the taxpayer and we are back to square one.” “There’ll be no beach at Portsea for the community this summer and we are deeply disappointed that this

THE rocks used to protect sandbag works at Portsea are being removed, despite Mornington Peninsula Shire having a plan to use them to bring sand back for summer. Picture: Yanni sensible option has been rejected out of hand,” Cr Hearn said. The shire said that in September 2018, Energy, Environment and Climate Change Minister Lily D’Ambrosio had confirmed her “previous commitment to further investi-

sandy beach to Portsea in the future.” Cr Hugh Fraser said the removal of the rocks “defies logic and is at odds with the Ms D’Ambrosio’s commitment for the government to investigate other options to bring the beach back”.