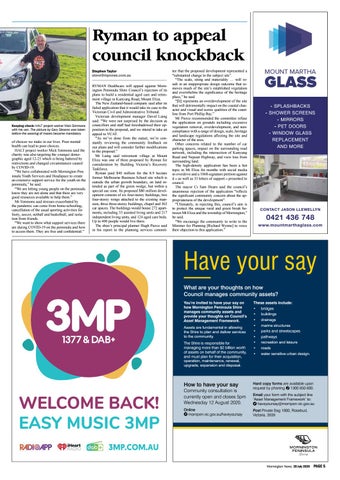 Keeping check: HALT project worker Mick Simmons with his van. The picture by Gary Sissons was taken before the wearing of masks became mandatory

of choices we make in our lives. Poor mental health can lead to poor choices. HALT project worker Mick Simmons said the charity was also targeting the younger demographic aged 12-25 which is being battered by restrictions and changed circumstances caused by COVID-19. “We have collaborated with Mornington Peninsula Youth Services and Headspace to create an extensive support service for the youth on the peninsula,” he said. “We are letting young people on the peninsula know they are not alone and that there are very good resources available to help them.” Mr Simmons said stresses exacerbated by the pandemic can come from home-schooling, cancellation of the usual sporting activities for footy, soccer, netball and basketball, and isolation from friends. “We want to show what support services there are during COVID-19 on the peninsula and how to access them. They are free and confidential.”

RYMAN Healthcare will appeal against Mornington Peninsula Shire Council’s rejection of its plans to build a residential aged care and retirement village in Kunyung Road, Mount Eliza. The New Zealand-based company said after its failed application that it would take its case to the Victorian Civil and Administrative Tribunal. Victorian development manager David Laing said: “We were not surprised by the decision as councillors and staff had foreshadowed their opposition to the proposal, and we intend to take an appeal to VCAT. “As we’ve done from the outset, we’re constantly reviewing the community feedback on our plans and will consider further modifications to the proposal.” Mr Laing said retirement village at Mount Eliza was one of three proposed by Ryman for consideration by Building Victoria’s Recovery Taskforce. Ryman paid $40 million for the 8.9 hectare former Melbourne Business School site which is outside the urban growth boundary, on land intended as part of the green wedge, but within a special use zone. Its proposed $80 million development consists of six four-storey buildings, two four-storey wings attached to the existing mansion, three three-storey buildings, chapel and 362 car spaces. The buildings would house 272 apartments, including 55 assisted living units and 217 independent living units, and 124 aged care beds. Up to 400 people would live there. The shire’s principal planner Hugh Pierce said in his report to the planning services commit-

tee that the proposed development represented a “substantial change to the subject site”. “The scale, siting and materiality … will result in an inappropriate design outcome that removes much of the site’s established vegetation and overwhelms the significance of the heritage place,” he said. “[It] represents an overdevelopment of the site that will detrimentally impact on the coastal character and visual and scenic qualities of the coastline from Port Phillip Bay.” Mr Pierce recommended the committee refuse the application on grounds including excessive vegetation removal, overdevelopment, and noncompliance with a range of design, scale, heritage and landscape regulations affecting the site and character of the area. Other concerns related to the number of car parking spaces, impact on the surrounding road network, including the intersection of Kunyung Road and Nepean Highway, and view loss from surrounding land. The high-density application has been a hot topic in Mt Eliza for months with social media in overdrive and a 1068-signature petition against it – as well as 33 letters of support – presented to council. The mayor Cr Sam Hearn said the council’s unanimous rejection of the application “reflects the significant community concern about the appropriateness of the development”. “Ultimately, in rejecting this, council’s aim is to protect the unique rural and green break between Mt Eliza and the township of Mornington,” he said. “We encourage the community to write to the Minister for Planning [Richard Wynne] to voice their objection to this application.”

Have your say What are your thoughts on how Council manages community assets? You’re invited to have your say on how Mornington Peninsula Shire manages community assets and provide your thoughts on Council’s Asset Management Framework. Assets are fundamental in allowing the Shire to plan and deliver services to the community. The Shire is responsible for managing more than $2 billion worth of assets on behalf of the community, and must plan for their acquisition, operation, maintenance, renewal, upgrade, expansion and disposal.

How to have your say

Email your form with the subject line ‘Asset Management Framework’ to: haveyoursay@mornpen.vic.gov.au