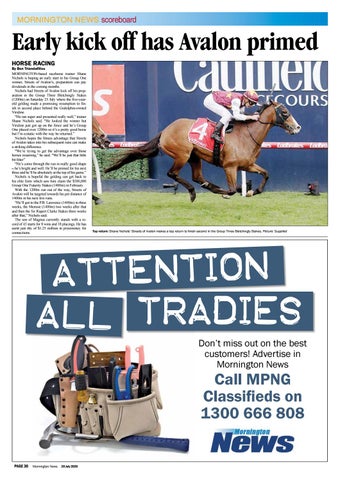 By Ben Triandafillou MORNINGTON-based racehorse trainer Shane Nichols is hoping an early start to his Group One winner, Streets of Avalon’s, preparation can pay dividends in the coming months. Nichols had Streets of Avalon kick off his preparation in the Group Three Bletchingly Stakes (1200m) on Saturday 25 July where the five-yearold gelding made a promising resumption to finish in second place behind the Godolphin-owned Viridine. “He ran super and presented really well,” trainer Shane Nichols said. “He looked the winner but Viridine just got up on the fence and he’s Group One placed over 1200m so it’s a pretty good horse but I’m ecstatic with the way he returned.” Nichols hopes the fitness advantage that Streets of Avalon takes into his subsequent runs can make a striking difference. “We’re trying to get the advantage over those horses resuming,” he said. “We’ll be just that little bit fitter” “He’s come through the run in really good shape – he’s bright and well. He’ll be primed for his next three and he’ll be absolutely at the top of his game.” Nichols is hopeful the gelding can get back to his elite form which saw him claim the $500,000 Group One Futurity Stakes (1400m) in February. With the 1200m run out of the way, Streets of Avalon will be targeted towards his pet distance of 1400m in his next few runs. “He’ll got to the P.B. Lawrence (1400m) in three weeks, the Memsie (1400m) two weeks after that and then the Sir Rupert Clarke Stakes three weeks after that,” Nichols said. The son of Magnus currently stands with a record of 45 starts for 8 wins and 18 placings. He has earnt just shy of $1.25 million in prizemoney for connections.