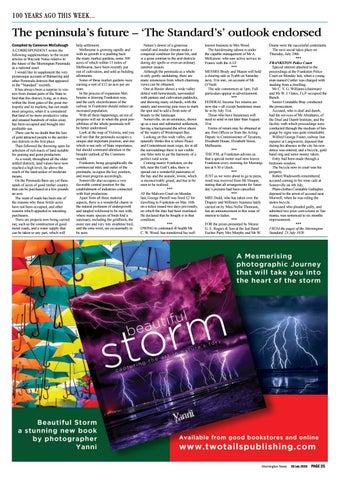 The peninsula’s future – ‘The Standard’s’ outlook endorsed Compiled by Cameron McCullough A CORRESPONDENT writes the following supplementary to the recent articles in Wayside Notes relative to the future of the Mornington Peninsula as a national asset: I would like to supplement the very picturesque account of Balnarring and other Peninsula districts that appeared in the “Standard” recently. It has always been a surprise to visitors from distant parts of the State to find that this district, lying, as it does, within the front gates of the great metropolis and its markets, has not made more progress, when it is considered that land of no more productive value and situated hundreds of miles away has been occupied and brought into profitable use. There can be no doubt that the lure of gold attracted people to the auriferous districts in the first place. Then followed the throwing open for selection of rich tracts of land suitable for grazing and grain production. As a result, throughout all the older settled districts, land values have now reached a high level, far above the reach of the land-seeker of moderate means. On the Peninsula there are yet thousands of acres of good timber country that can be purchased at a few pounds an acre. The want of roads has been one of the reasons why these fertile acres have not been occupied, and other reasons which appealed to intending purchasers. There are projects now being carried out, such as the construction of good metal roads, and a water supply that can be taken to any part, which will

help settlement. Melbourne is growing rapidly and with its growth it is pushing back the many market gardens, some 300 acres of which within 15 miles of Melbourne, have been recently put out of cultivation, and sold as building allotments. Some of these market gardens were earning a rent of £12 an acre per annum. In the process of expansion Melbourne is drawing Frankston way, and the early electrification of the railway to Frankston should induce an increased population. With all these happenings, an era of progress will set in when the great possibilities of the whole peninsula will be better understood. Look at the map of Victoria, and you will see that the peninsula occupies a unique and important position, and one which is not only of State importance, but should command attention in the broader outlook of the Commonwealth. Frankston, being geographically the commercial inlet, and outlet of the peninsula, occupies the key position, and must progress accordingly. Somerville also occupies a very favorable central position for the establishment of industries connected with fruit production. Apart from all these material aspects, there is a wonderful charm in the natural profusion of undergrowth and tangled wildwood to be met with, where many species of birds find a sanctuary, including the goldfinch, the more rare and very tiny mistletoe bird, and the emu wren, are occasionally to be seen.

Nature’s dower of a generous rainfall and insular climate make a congenial condition for plant life, and is a great contrast to the arid districts during dry spells or even an ordinary summer season. Although the peninsula as a whole is only gently undulating, there are many eminences from which charming views can be obtained. One at Baxter shows a wide valley dotted with homesteads, surrounded with pasture and cultivation paddocks, and showing many orchards, with the stately and towering pine trees to mark the spot and to add a fresh note of beauty to the landscape. Somerville, on an eminence, shows up as a neat and substantial settlement, having a background the silver sheen of the waters of Westernport Bay. Looking on this wide valley, one naturally thinks this is where Peace and Contentment must reign, for in all the surroundings there is not visible one false note to jar the harmony of a perfect rural scene. Coming nearer Frankston, on the hill, near the Golf Links, there is spread out a wonderful panorama of the bay and the seaside, towns, which is inconceivably grand, and has to be seen to be realized. *** AT the Malvern Court on Monday last, George Parnell was fined £2 for travelling to Frankston on May 16th on a ticket issued two days previously, on which the date had been mutilated. He declared that he bought it in that condition. *** OWING to continued ill health Mr C. W. Wood. has transferred his well

known business to Mrs Wood. The hairdressing saloon is under the capable management of Mr A. McKenzie. who saw active service in France with the A.I.F. *** MESSRS Brody and Mason will hold a clearing sale at Tyabb on Saturday next, 31st inst., on account of Mr. O’Neill. The sale commences at 1pm. Full particulars appear in advertisement. *** FEDERAL Income Tax returns are now due – all except businesses must be in by July 31st. Those who have businesses will need to send in not later than August 31st. Forms of return may be obtained at any Post Offices or from the Acting Deputy to Commissioner of Taxation, Elizabeth House, Elizabeth Street, Melbourne. *** THE P.M, at Frankston advises us that a special motor mail now leaves Frankston every morning for Mornington at 9.30 o’clock. *** JUST as we were about to go to press, word was received from Mr Hooper, stating that all arrangements for Saturday’s pictures had been cancelled. *** MRS Dodd, who has taken over the Drapery and Millinery business lately carried on by Miss Nellie Thomson, has an announcement in this issue of interest to ladies. *** FOR the prizes presented by Mesrsr G. E. Rogers &amp; Son at the last Band Euchre Party Mrs Murphy and Mr W.

Deane were the successful contestants. The next social takes place on Thursday, July 29th. *** FRANKSTON Police Court Special interest attached to the proceedings at the Frankston Police Court on Monday last, when a young man named Cuttler was charged with stealing from a dwelling. Mr C. V. G. Williams (chairman) and Mr W. J. Oates, J’s.P. occupied the Bench. Senior Constable Bray conducted the prosecution. Accused, who is deaf and dumb, had the services of Mr Abrahams, of the Deaf and Dumb Institute, and the facility with which proceedings were conducted through the medium of language by signs was quite remarkable. Wilfred George Foster, railway line repairer at Langwarrin, deposed that during his absence in the city his residence was entered, and a bicycle, gold band ring and some money taken. Entry had been made through a bedroom window. The bicycle now in court was his property. Robert Wadsworth remembered accused coming to his wine cafe at Somerville on 4th July. Plain-clothes Constable Gallagher deposed to the arrest of accused near Morwell, when he was riding the stolen bicycle. Accused who pleaded guilty, and admitted two prior convictions in Tasmania, was sentenced to six months imprisonment. *** FROM the pages of the Mornington Standard, 23 July 1920