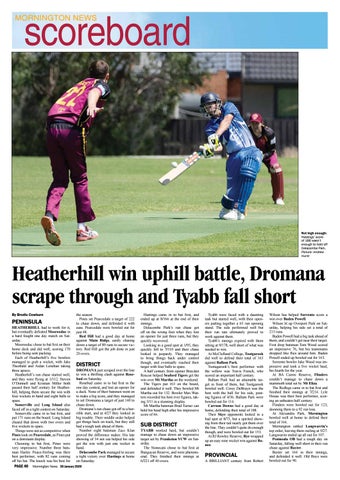 HEATHERHILL had to work for it, but eventually defeated Moorooduc in a hard fought one day match on Saturday. Moorooduc chose to bat first on their home deck and did well, scoring 170 before being sent packing. Each of Heatherhill’s five bowlers managed to grab a wicket, with Jake Theobald and Aidan Lenehan taking three apiece. Heatherhill’s run chase started well, and they were flying at 1/112. Steven O’Donnell and Kristian Miller both passed their half century for Heatherhill, helping them secure the win with four wickets in hand and eight balls to spare. Somerville and Long Island also faced off in a tight contest on Saturday. Somerville came in to bat first, and put 171 runs on the board. Long Island chased that down with two overs and five wickets to spare. Things were not as competitive when Pines took on Pearcedale, as Pines put on a dominant display. Choosing to bat first, Pines were very impressive. Number three batsman Harley Peace-Stirling was their best performer, with 82 runs coming off his bat. The knock was his best for

the season. Pines set Pearcedale a target of 222 to chase down, and defended it with ease. Pearcedale were bowled out for just 48. Red Hill had a good day at home against Main Ridge, easily chasing down a target of 89 runs to secure victory. Red Hill got the job done in just 20 overs.

DROMANA just scraped over the line to win a thrilling clash against Rosebud on Saturday. Rosebud came in to bat first in the one day contest, and lost an opener for a duck. None of their batsmen went on to make a big score, and they managed to set Dromama a target of just 140 to chase down. Dromana’s run chase got off to a horrible start, and at 4/27 they looked in big trouble. Their middle order helped get things back on track, but they still had a tough task ahead of them. Number eight batsman Zacc Klan proved the difference maker. His late showing of 34 not out helped his side get the win with just one wicket in hand. Delacombe Park managed to secure a tight victory over Hastings at home on Saturday.

Hastings came in to bat first, and ended up at 8/166 at the end of their innings. Delacombe Park’s run chase got off on the wrong foot when they lost an opener for just three runs, but they quickly recovered. Looking in a good spot at 1/95, they quickly fell to 7/110 and their chase looked in jeopardy. They managed to bring things back under control though, and eventually reached their target with four balls to spare. A half century from opener Brayden Roscoe helped Seaford Tigers get the win over Mt Martha on the weekend. The Tigers put 163 on the board, and defended it well. They bowled Mt Martha out for 132. Bowler Max Watters recorded his best ever figures, taking 5/11 in a stunning display. Mt Martha batsman Brad Turner can hold his head high after his impressive score of 66.

TYABB worked hard, but couldn’t manage to chase down an impressive target set by Frankston YCW on Saturday. The Stonecats chose to bat first at Bunguyan Reserve, and were phenomenal. They finished their innings at 6/221 off 40 overs.

Tyabb were faced with a daunting task but started well, with their openers putting together a 65 run opening stand. The side performed well but their run rate ultimately proved to work against them. Tyabb’s innings expired with them sitting at 9/178, well short of what was needed to win. At McClelland College, Tootgarook did well to defend their total of 165 against Ballam Park. Tootagarook’s best performer with the willow was Travis French, who scored an important half century. Ballam Park had an attainable target in front of them, but Tootgarook bowled well. Corey DeBruyn was the best with the ball for his side, posting figures of 4/36. Ballam Park were bowled out for 114. Carrum Downs had a good day at home, defending their total of 188. Their Skye opponents looked in a bad spot at 8/75, but a spirited showing from their tail nearly got them over the line. They couldn’t quite do enough though, and were bowled out for 153. At RJ Rowley Reserve, Rye wrapped up an easy nine wicket win against Boneo.

A BRILLIANT century from Robert

Wilson has helped Sorrento score a win over Baden Powell. Wilson lit up Overport Park on Saturday, helping his side set a total of 213 runs. Baden Powell had a big task ahead of them, and couldn’t get near their target. First drop batsman Tom Wood scored an impressive 76, but his teammates dropped like flies around him. Baden Powell ended up bowled out for 163. Sorrento bowler Jake Wood was impressive and took a five wicket haul, his fourth for the year. At BA Cairns Reserve, Flinders couldn’t manage to chase down a mammoth total set by Mt Eliza. The Redlegs came in to bat first and finished their innings at 7/214. Lyle House was their best performer, scoring an unbeaten half century. Flinders were bowled out for 123, dooming them to a 92 run loss. At Alexandra Park, Mornington bowled well at home to defend their total of 164. Mornington rattled Langwarrin’s top order, leaving them reeling at 5/27. Langwarrin ended up all out for 107. Peninsula OB had a tough day on Saturday, falling well short in their run chase against Baxter. Baxter set 164 in their innings, and defended it well. Old Boys were bowled out for 90.