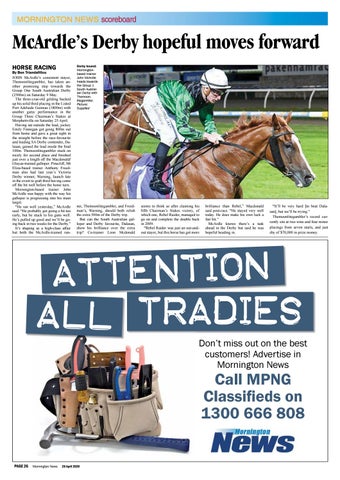 By Ben Triandafillou JOHN McArdle’s consistent stayer, Themoonlitegambler, has taken another promising step towards the Group One South Australian Derby (2500m) on Saturday 9 May. The three-year-old gelding backed up his solid third placing in the Listed Port Adelaide Guineas (1800m) with another gutsy performance in the Group Three Chairman’s Stakes at Morphettville on Saturday 25 April. Having sat outside the lead, jockey Emily Finnegan got going 800m out from home and gave a great sight in the straight before the race-favourite and leading SA Derby contender, Dalasan, gained the lead inside the final 100m. Themoonlitegambler stuck on nicely for second place and finished just over a length off the Macdonald/ Gluyas-trained galloper. Pinecliff, Mt Eliza-based trainer Anthony Freedman also had last year’s Victoria Derby winner, Warning, launch late in the event to grab third having come off the bit well before the home turn. Mornington-based trainer John McArdle was happy with the way his galloper is progressing into his main target. “He ran well yesterday,” McArdle said. “He probably got going a bit too early, but he stuck to his guns well. He’s pulled up good and we’ll be going back in two weeks for the Derby.” It’s shaping as a high-class affair but both the McArdle-trained run-

ner, Themoonlitegambler, and Freedman’s, Warning, should both relish the extra 500m of the Derby trip. But can the South Australian galloper and Derby favourite, Dalasan, show his brilliance over the extra trip? Co-trainer Leon Mcdonald

seems to think so after claiming his fifth Chairman’s Stakes victory, of which one, Rebel Raider, managed to go on and complete the double back in 2009. “Rebel Raider was just an out-andout stayer, but this horse has got more

brilliance than Rebel,” Macdonald said post-race. “He stayed very well today. He does make his own luck a fair bit.” McArdle knows there’s a task ahead in the Derby but said he was hopeful heading in.

“It’ll be very hard [to beat Dalasan], but we’ll be trying.” Themoonlitegambler’s record currently sits at two wins and four minor placings from seven starts, and just shy of $70,000 in prize money.