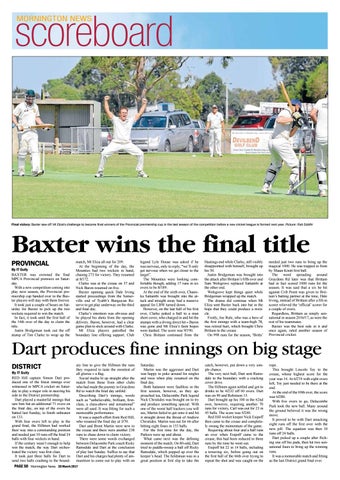 Final victory: Baxter saw off Mt Eliza's challenge to become final winners of the Provincial premiership cup in the last season of the competition before a new cricket league is formed next year. Picture: Rab Siddhi

By IT Gully BAXTER was crowned the final MPCA Provincial premiers on Saturday. With a new competition coming into play next season, the Provincial premiership cup handed over to the Baxter players will stay with them forever. It took just a couple of hours on Saturday for Baxter to pick up the two wickets required to win the match. In fact, it took until the first ball of the 14th over of the day to claim the title. Justin Bridgeman took out the off stump of Tim Clarke to wrap up the

match, Mt Eliza all out for 209. At the beginning of the day, the Mounties had two wickets in hand, chasing 273 for victory. They resumed at 8/172. Clarke was at the crease on 37 and Nick Baron resumed on five. Baxter opening quick Dale Irving started proceedings from the Somerville end of Tyabb’s Bunguyan Reserve to get play underway on the third and final day. Clarke’s intention was obvious and he played his shots from the opening delivery. Baron, however, had a clear game plan to stick around with Clarke. Mt Eliza players patrolled the boundary line offering support. Club

legend Lyle House was asked if he was nervous, only to reply, “we’ll only get nervous when we get closer to the target”. The Mounties were looking comfortable though, adding 17 runs in six overs to be 8/189. At the end of the sixth over, Chamika Sattambi was brought into the attack and straight away had a massive appeal for LBW turned down. However, on the last ball of his first over, Clarke poked a ball to a man short cover, who charged in and hit the stumps with a diving direct hit – Baron was gone and Mt Eliza’s faint hopes were dashed. The score was 9/190. Chris Brittain continued from the

Hastings end while Clarke, still visibly disappointed with himself, brought up his 50. Justin Bridgeman was brought into the attack after Brittain’s fifth over and Sam Wolsgrove replaced Sattambi at the other end. Wolsgrove kept things quiet while Bridgeman wrapped up the match. The drama did continue when Mt Eliza sent Baxter back into bat in the hope that they could produce a miracle. Firstly, Joe Rule, who was a hero of the first innings with a team-high 78, was retired hurt, which brought Chris Brittain to the crease. On 998 runs for the season, ‘Britts’

needed just two runs to bring up the magical 1000. He was trapped in front by Shaun Knott first ball. The word spreading around Graydens Rd later was that Brittain had in fact scored 1000 runs for the season. It was said that a six he hit against Crib Point was given to Brittain’s batting partner at the time, Dale Irving, instead of Brittain after a fill-in scorer relieved the ‘official’ scorer for a couple of overs. Regardless, Brittain as simply sensational in season 2016/17, as were the rest of his teammates. Baxter was the best side in it and once again, ruled another season of Provincial cricket.

By IT Gully RED Hill captain Simon Dart produced one of the finest innings ever witnessed in MPCA cricket on Saturday to play a major role in steering his side to the District premiership. Dart played a masterful innings that saw him bat an additional 71 overs on the final day, on top of the overs he batted last Sunday, to finish unbeaten on 133. With four overs left to play in the grand final, the Hillmen had worked their way into a commanding position and needed just 10 runs off the final 24 balls with four wickets in hand. If the century wasn’t enough to help win the match, the way Dart orchestrated the victory was first class. It took just three balls for Dart to send two balls crashing to the bound-

ary line to give the Hillmen the runs they required to taste the sweetest of all glories – a flag. Social media lit up straight after the match from those from other clubs who had made the journey to Graydens Rd to watch the final day unfold. Describing Dart’s innings, words such as “unbelievable, brilliant, firstclass, a class-above and sensational” were all used. It was fitting for such a memorable performance. It was a superb effort from Red Hill, who resumed the final day at 3/70. Dart and Brent Martin were new to the crease and there were another 238 runs to chase down to claim victory. There were some words exchanged between Delacombe Park coach Ricky Ramsdale and Dart at the conclusion of play last Sunday. Suffice to say that Dart and his charges had plenty of ammunition to come out to play with on

Saturday. Martin was the aggressor and Dart was happy to poke around for singles and twos when play resumed on the final day. Both batsmen were faultless in the first session, however, as they approached tea, Delacombe Park legend Nick Christides was brought on to try and produce something special. With one of the worst half trackers you will see, Martin failed to get onto it and hit it straight down the throat of Andrew Christides. Martin was out for 66 after hitting eight fours in 155 balls. For the first time for the day, the Parkers were up and about. What came next was the defining moment of the match. On 80-odd, Dart tried to paddle-sweep a ball off Ricky Ramsdale, which popped up over the keeper’s head. The fieldsman was in a great position at first slip to take the

catch, however, put down a very simple chance. The very next ball, Dart sent Ramsdale to the boundary with a cracking cover drive. The Hillmen again settled and got to drinks to be 4/232 off 60 overs. Dart was on 90 and Robinson 15. Dart brought up his 100 in the 62nd over, however, requiring another 70 runs for victory, Carl was out for 23 in 45 balls. The score was 5/240. Red Hill wicket keeper Nick Esipoff then came to the crease and completely swung the momentum of the game. Requiring about four and a half runs an over when Esipoff came to the crease, this had been reduced to three runs by the time he went out. Esipoff hit 22 in 14 balls, including a towering six, before going out on the first ball of the 66th over trying to repeat the shot and was caught on the

rope. This brought Lincoln Toy to the crease, whose highest score for the year was 14. At 6/274 with eight overs left, Toy just needed to be there at the end. At the end of the 69th over, the score was 6/280. With five overs to go, Delacombe Park took the new ball. Many around the ground believed it was the wrong move. It proved to be with Dart smacking eight runs off the first over with the new pill. The equation was then 10 runs off 24 balls. Dart picked up a couple after flicking one off his pads, then hit two sensational fours to bring up the winning runs. It was a memorable match and fitting as the last District grand final ever.