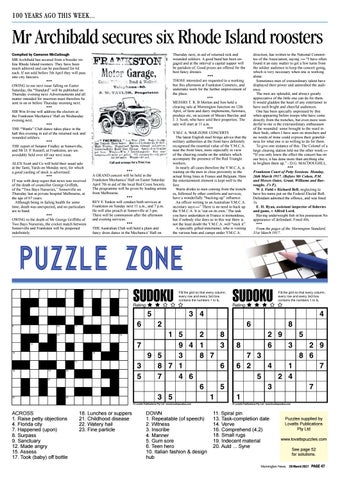 Mr Archibald secures six Rhode Island roosters Compiled by Cameron McCullough MR Archibald has secured from a breeder six fine Rhode Island roosters. They have been much admired and can be purchased for 6d each. If not sold before 5th April they will pass into city fanciers. *** OWING to our next issue falling on Easter Saturday, the “Standard” will be published on Thursday evening next. Advertisements and all matter intended for insertion must therefore be sent in on or before Thursday morning next. *** SIR Wm Irvine will address the electors at tho Frankston Mechanics’ Hall on Wednesday evening next. *** THE “Wattle” Club dance takes place in the hall this evening in aid of the returned sick and wounded soldiers. *** THE report of Senator Findley at Somerville, and Mr D. P. Russell, at Frankston, are unavoidably held over till our next issue. *** ALEX Scott and Co will hold their usual sale at the Tanti, Yards on Monday next, for which a good yarding of stock is advertised. *** IT was with deep regret that news was received of the death of councillor George Griffeth, of the “Two Bays Nurseries,” Somerville on Thursday last at private hospital Melbourne, at the age of 67 years. Although being in failing health for some time, death was unexpected, and no particulars are to hand. *** OWING to the death of Mr George Griffiths of Two Bays Nurseries, the cricket match between Somerville and Frankston will be posponed indefinitely.

*** A GRAND concert will be held in the Frankston Mechanics’ Hall on Easter Saturday April 7th in aid of the local Red Cross Society. The programme will be given by leading artists from Melbourne. *** REV E Tonkin will conduct both services at Frankston on Sunday next 11 a.m., and 7 p.m. He will also preach at Somerville at 3 pm. There will be communion after the afternoon and evening services. *** THE Australian Club will hold a plain and fancy dress dance in the Mechanics’ Hall on

Thursday next, in aid of returned sick and wounded soldiers. A good band has been engaged and at the interval a capital supper will be partaken of. Good prizes are offered for the best fancy dresses. *** THOSE interested are requested to a working bee this afternoon at Frankston Cemetery, and undertake work for the further improvement of the place. *** MESSRS T. R. B Morton and Son hold a clearing sale at Mornington Junction on 12th April, of farm and dairy implements, furniture, produce etc, on account of Messrs Barclay and J. J. Scott, who have sold their properties. The sale will start at 11 a.m. *** Y M.C A. WAR ZONE CONCERTS The latest English mail brings advice that the military authorities at the front have definitely recognised the essential value of the Y.M.C.A. near the front lines, more especially in view of the cheering results on the soldiers which accompany the presence of the Red Triangle workers. In nearly all cases therefore the Y M.C.A, is waiting on the men in close proximity to the actual firing lines in France and Belgium. Here the entertainment element is kept well to the fore. Warm drinks to men coming from the trenches, followed by other comforts and services, have a wonderfully “bucking-up” influence. An officer writing to an Australian Y.M.C.A. secretary says:—” There is no need to back up the Y.M.C.A. It is ‘out on its own.’ The task you have undertaken in France is tremendous, but if nobody else does so in this war there is not the least doubt the Y.M.C.A. will “stick it”. A specially gifted entertainer, who is visiting the various huts and camps under Y.M.C.A.

direction, has written to the National Committee of the Association; saying :— “I have often found it an easy matter to get a few turns from the soldier audience to keep the concert going, which is very necessary when one is working alone. Sometimes men of extraordinary talent have displayed their power and astonished the audience. The men are splendid, and always greatly appreciative of the little one can do for them. It would gladden the heart of any entertainer to have such bright and cheerful audiences. One has been specially impressed by this when appearing before troops who have come directly from the trenches, but even more wonderful to me is the exteraordinary enthusiasm of the wounded: some brought to the ward in their beds, others I have seen on stretchers and no words of mine could express their gratefulness for what one is so willing to do for them. To give one instance of this: The Colonel of a large clearing station told me the other week:— “If you only knew the effect the concert has on our boys; it has done more than anything else to brighten them up.” - D.G. MACDOUGHLL. *** Frankston Court of Petty Sessions. Monday, 26th March 1917. (Before Mr Cohen, P.M. and Messrs Oates, Grant, Williams and Burroughs. J’s P.). W J. Field v Richard Bell, neglecting to have his name put on the Federal Electal Roll. Defendant admitted the offence, and was fined 1s. E. H. Ryan, assistant inspector of fisheries and game, v Alfred Lord. Having underweight fish in his possession No appearance of defendant. Fined 40s. *** From the pages of the Mornington Standard, 31st March 1917.