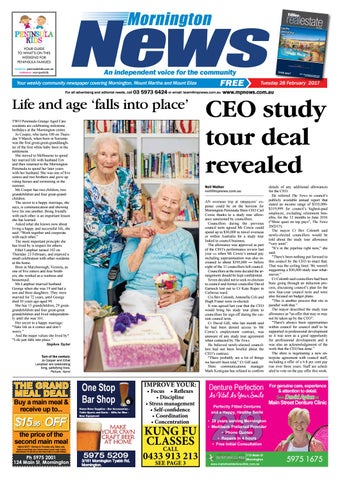 TWO Peninsula Grange Aged Care residents are celebrating milestone birthdays at the Mornington centre. Jo Cooper, who turns 100 on Thursday 9 March, when born in Sorrento was the first great-great-granddaughter of the first white baby born in the settlement. She moved to Melbourne to spend her married life with husband Ern and then returned to the Mornington Peninsula to spend her later years with her husband. She was one of five sisters and two brothers and grew up riding horses and swimming in the summer. Ms Cooper has two children, two grandchildren and four great-grandchildren. The secret to a happy marriage, she says, is communication and showing love for one another. Being friendly with each other is an important lesson she has learned. Asked what she knows now about living a happy and successful life, she said: “Work together and cooperate with each other.” The most important principle she has lived by is respect for others. Ethel Lanphier turned 102 on Thursday 23 February, and enjoyed a small celebration with other residents at the home. Born in Maryborough, Victoria, as one of five sisters and four brothers, she worked as a waitress and housemaid. Ms Lanphier married husband George when she was 19 and had a son and three daughters. They were married for 72 years, until George died 10 years ago aged 99. She has 15 grandchildren, 29 greatgrandchildren and four great-great grandchildren and lived independently until she was 101. Her secret to a happy marriage: “Take life as it comes and don’t worry.” And the major values she lived by? “Life just falls into place.” Stephen Taylor

the price of the second main meal Valid to 9/3/17. Monday to Thursday only. Bistro only.

Neil Walker neil@mpnews.com.au AN overseas trip at ratepayers’ expense could be on the horizon for Mornington Peninsula Shire CEO Carl Cowie thanks to a study tour allowance sanctioned by councillors. Councillors during the previous council term agreed Mr Cowie could spend up to $30,000 to travel overseas or within Australia for a study tour linked to council business. The allowance was approved as part of the CEO’s performance review last year — when Mr Cowie’s annual pay including superannuation was also increased to about $395,000 — before eight of the 11 councillors left council. Councillors at the time decided the arrangement should be kept confidential. Seven decided not to seek re-election to council and former councillor David Garnock lost out to Cr Kate Roper in Cerberus ward. Crs Bev Colomb, Antonella Celi and Hugh Fraser were re-elected. It was agreed last year that the CEO would bring his study tour plans to councillors for sign off during the current council term. Cr David Gill, who last month said he had been denied access to Mr Cowie’s employment contract, was unaware of any study tour agreement when contacted by The News. He believed newly-elected councillors had not been briefed about the CEO’s contract. “There probably are a lot of things we haven't been told,” Cr Gill said. Shire communications manager Mark Kestigian has refused to confirm

Life and age ‘falls into place’

details of any additional allowances for the CEO. He referred The News to council’s publicly available annual report that stated an income range of $310,000$319,999 for council’s highest-paid employee, excluding retirement benefits, for the 12 months to June 2016 (“Shire quiet on top pays”, The News 20/2/17). The mayor Cr Bev Colomb said newly-elected councillors would be told about the study tour allowance “very soon”. “It’s in the pipeline right now,” she said. "There's been nothing put forward to this council by the CEO to enact that. That was the ceiling limit. We weren't suggesting a $30,000 study tour whatsoever.” Cr Colomb said councillors had been busy going through an induction process, discussing council’s plan for the new four-year council term and were also focused on budget plans. "This is another process that sits in parallel with that.” The mayor described the study tour allowance as “an offer that may or may not be taken up by the CEO”. "There's always been opportunities within council for council staff to be supported in professional development so it was seen as a good opportunity for professional development and it was also an acknowledgement of the work that the CEO has done.” The shire is negotiating a new enterprise agreement with council staff, including a offer of a 6.8 per cent pay rise over three years. Staff are scheduled to vote on the pay offer this week.