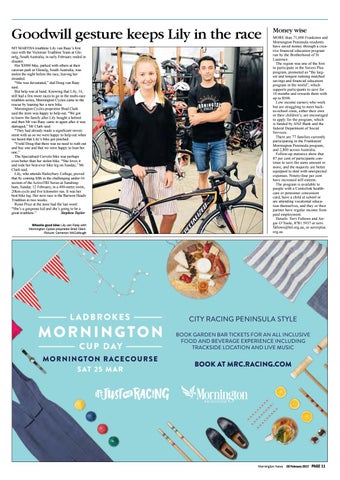 Goodwill gesture keeps Lily in the race MT MARTHA triathlete Lily van Raay’s first race with the Victorian Triathlon Team at Glenelg, South Australia, in early February ended in disaster. Her $3000 bike, parked with others at their caravan park at Glenelg, South Australia, was stolen the night before the race, leaving her stranded. “She was devastated,” dad Doug van Raay said. But help was at hand. Knowing that Lily, 14, still had a few more races to go in the multi-race triathlon series, Mornington Cycles came to the rescue by loaning her a new bike. Mornington Cycles proprietor Brad Clark said the store was happy to help out. “We got to know the family after Lily bought a helmet and then Mr van Raay came in again after it was damaged,” Mr Clark said. “They had already made a significant investment with us so we were happy to help out when we heard that Lily’s bike got pinched. “I told Doug that there was no need to rush out and buy one and that we were happy to loan her one.” The Specialised Cervelo bike was perhaps even better than her stolen bike. “She loves it and rode her best-ever bike leg on Sunday,” Mr Clark said. Lily, who attends Haileybury College, proved that by coming fifth in the challenging under-16 section of the ActiveTRI Series at Sandringham, Sunday 12 February, in a 400-metre swim, 20km-cycle and five kilometre run. It was her best bike leg. Her next race is the Barwon Heads Triathlon in two weeks. Rosie Price at the store had the last word: “She’s a gorgeous kid and she’s going to be a great triathlete.” Stephen Taylor Wheelie good bike: Lily van Raay with Mornington Cycles proprietor Brad Clark. Picture: Cameron McCullough

Money wise MORE than 71,000 Frankston and Mornington Peninsula residents have saved money through a creative financial education program run by the Brotherhood of St Laurence. The region was one of the first to participate in the Savers Plus program, promoted as “the largest and longest running matched savings and financial education program in the world”, which supports participants to save for 10 months and rewards them with up to $500. Low income earners who work but are struggling to meet backto-school costs, either their own or their children’s, are encouraged to apply for the program, which is funded by ANZ Bank and the federal Department of Social Services. There are 77 families currently participating in the Frankston/ Mornington Peninsula program, and 2,800 across Australia. Follow-up statistics show that 87 per cent of participants continue to save the same amount or more, and the majority are better equipped to deal with unexpected expenses. Ninety-four per cent have increased self-esteem. The program is available to people with a Centrelink healthcare or pensioner concession card, have a child at school or are attending vocational education themselves, and they or their partner have regular income from paid employment. Details: Terri Fallows and Angie O’Toole, 8781 5937 or terri. fallows@bsl.org.au, or saverplus. org.au