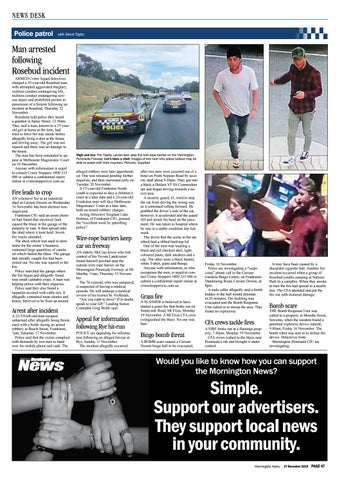 ARMED Crime Squad detectives charged a 35-year-old Rosebud man with attempted aggravated burglary, reckless conduct endangering life, reckless conduct endangering serious injury and prohibited person in possession of a firearm following an incident at Rosebud, Thursday 22 November. Residents told police they heard a gunshot in Spray Street, 12.50am. They said a man, known to a 17-yearold girl at home at the time, had tried to force his way inside before allegedly firing a shot at the house and driving away. The girl was not injured and there was no damage to the house. The man has been remanded to appear at Melbourne Magistrates’ Court on 10 December. Anyone with information is urged to contact Crime Stoppers 1800 333 000 or submit a confidential report online at crimestoppersvic.com.au

AN extensive fire at an industrial shed at Carrum Downs on Wednesday 14 November has been deemed nonsuspicious. Frankston CIU said an arson chemist had found that electrical fault caused the blaze in the garage of the property at 1am. It then spread onto the shed where it took hold. Seven fire trucks attended. The shed, which was used to store items for the owner’s business, contained large quantities of canola oil which fueled the blaze. The garage that initially caught fire had been rented out. No one was injured in the fire. Police searched the garage where the fire began and allegedly found four small cannabis crops. A man was helping police with their inquiries. Police said they also found a tarpaulin secured with cable ties. It allegedly contained meat chunks and bones, believed to be from an animal.

A 23-YEAR-old man escaped unharmed after allegedly being threatened with a bottle during an armed robbery in Beach Street, Frankston, 7pm, Saturday 17 November. Police said that the victim complied with demands by two men to hand over his mobile phone and cash. The

High and dry: The Toyota Landcruiser atop the wire-rope barrier on the Mornington Peninsula Freeway. Let’s have a chat: Images of two men who police believe may be able to assist with their inquiries. Pictures: Supplied

alleged robbers were later apprehended. One was released pending further inquiries, and then rearrested early on Tuesday 20 November. A 17-year-old Frankston North youth is expected to face a children’s court at a later date and a 24-year-old Frankston man will face Melbourne Magistrates’ Court at a later date, both on armed robbery charges. Acting Detective Sergeant Luke Holmes, of Frankston CIU, praised the “excellent work by patrolling police”.

AN elderly McCrae driver who lost control of his Toyota Landcruiser found himself perched atop the outside wire-rope barrier on the Mornington Peninsula Freeway at Mt Martha, 11am, Thursday 15 November. The 76-yearold, who was uninjured, is suspected of having a medical episode. He will undergo a medical review of his licence by VicRoads. “Are you right to drive? If in doubt, speak to your GP,” Leading Senior Constable Greg Wolfe said.

after two men were escorted out of a hotel on Point Nepean Road by security staff about 9.20pm. They got into a black a Holden VF SS Commodore ute and began driving towards a noexit area. A security guard, 61, tried to stop the car from driving the wrong way as it continued rolling forward. He grabbed the driver’s side of the car, however, it accelerated and the guard fell and struck his head on the pavement. He was taken to hospital where he was in a stable condition late last week. The driver fled the scene in the ute which had a ribbed hard-top lid. One of the men was wearing a black and red checked shirt, lightcoloured pants, dark sneakers and a cap. The other wore a black beanie, white T-shirt, jeans and thongs. Anyone with information, or who recognises the men, is urged to contact Crime Stoppers 1800 333 000 or submit a confidential report online at crimestoppersvic.com.au

A SLASHER is believed to have started a grass fire that broke out on Sunnyside Road, Mt Eliza, Monday 19 November. A Mt Eliza CFA crew extinguished the blaze. No one was hurt.

A BOMB scare caused a Carrum Downs bingo hall to be evacuated,

Friday 16 November. Police are investigating a “suspicious” phone call to the Carrum Gardens Bingo Centre, on FrankstonDandenong Road, Carrum Downs, at 8pm. A male caller allegedly said a bomb hidden in the hall would detonate in 20 minutes. The building was evacuated and the Bomb Response Unit called in to sweep the area. They found no explosives.

A FIRE broke out at a Hastings property, 7.40pm, Monday 19 November. CFA crews rushed to the blaze near Peninsula Link and brought it under control.

It may have been caused by a discarded cigarette butt. Another fire incident occurred when a group of Rosebud youths camping at Nations Park lit a campfire. When they awoke at 6am the fire had spread to a nearby tree. The CFA attended and put the fire out with minimal damage.

THE Bomb Response Unit was called to a property in Morobe Street, Sorrento, when the resident found a potential explosive device outside, 9.40am, Friday 16 November. The bomb robot was sent in to defuse the device. Detectives from Mornington Peninsula CIU are investigating.

Would you like to know how you can support the Mornington News?

Simple. Support our advertisers. They support local news in your community. Mornington News