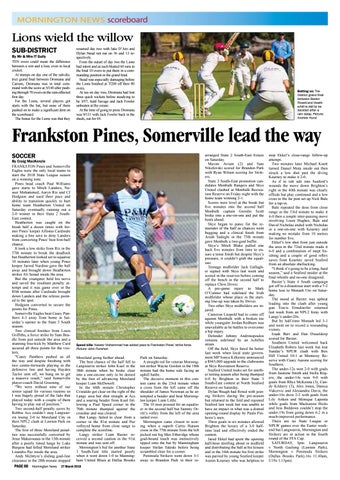 By Mr & Mrs IT Gully TEN overs could mean the difference between a win and a loss, even in local cricket. At stumps on day one of the sub-district grand final between Dromana and Carrum, Dromana was in total command with the score at 5/140 after pushing through 70 overs on the rain-affected first day. For the Lions, several players got starts with the bat, but none of them pushed on to make a significant dent on the scoreboard. The bonus for the Lions was that they

resumed day two with Jake D’Atri and Dylan Stead not out on 36 and 13 respectively. From the outset of day two the Lions had intent and as such blasted 60 runs in the final 10 overs to put them in a commanding position in the grand final. Stead was especially damaging before the Lions finished at 7/200 off their 80 overs. At tea on day two, Dromana had lost three quick wickets before steadying to be 3/57, Jedd Savage and Jack Fowler unbeaten at the crease. At the time of going to press Dromana was 9/131 with Jack Fowler back in the sheds, out for 69.

Batting on: The District grand final between Baden Powell and Heatherhill is still to be decided after a rain delay. Picture: Andrew Hurst

By Craig MacKenzie FRANKSTON Pines and Somerville Eagles were the only local teams to start the 2018 State League season on a winning note. Pines head coach Paul Williams gave starts to Mitch Landers, Naseer Mohammed, Aaryn Rix and CJ Hodgson and used their pace and ability to transition quickly to hurt home team Heatherton United on Saturday eventually running out a 2-0 winner in their State 2 SouthEast contest. Heatherton was caught on the break half a dozen times with former Pines’ keeper Alfonso Cardinale making a fine save to deny Landers from converting Pines’ best first-half chance. It took a low strike from Rix in the 57th minute to break the deadlock but Heatherton looked set to equalise 10 minutes later when young Pines keeper Jarrod Nardino gave the ball away and brought down Heatherton striker Ali Senad inside the area. But the youngster held his nerve and saved the resultant penalty attempt and it was game over in the 85th minute after Cardinale brought down Landers and the referee pointed to the spot. Hodgson converted to secure the points for Pines. Somerville Eagles beat Casey Panthers 4-3 away from home in Saturday’s opener to the State 5 South season. Two clinical finishes from Louis Griffiths, a fierce strike by Sam Beadle from just outside the area and a stunning free-kick by Matthew Curd secured all three points for the visitors. “Casey Panthers pushed us all the way and despite finishing with two centre-forwards playing in the defensive line and having Hayden Taylor sent off, we hung on to get a massive result,” said Somerville player-coach David Greening. “We were without nine of our senior squad for various reasons so I was hugely proud of the lads that played today with a couple of them having to play out of position.” Two second-half penalty saves by Robbie Acs couldn’t stop Langwarrin losing 2-0 to Moreland City in their NPL2 clash at Lawton Park on Saturday. The first of three Moreland penalties was successfully converted by Jesse Makarounas in the 15th minute after a poorly timed lunge by Luke Burgess had felled Moreland striker Lisandro Paz inside the area. Andy McIntyre’s sliding goal-line clearance in the 28th minute stopped

Moreland going further ahead. The best chance of the half fell to Langwarrin striker John Kuol in the 38th minute when he broke clear into a one-on-one only to be denied by the foot of advancing Moreland keeper Liam McDowell. In the 60th minute Christopher Cristaldo got clear on the right of the Langy area but shot straight at Acs and a soaring header from Kuol following a Paul Speed corner in the 70th minute thumped against the crossbar and was cleared. But Langy failed to clear from a corner in the 81st minute and Paz volleyed home from close range to complete the scoreline. Langy striker Liam Baxter received a second caution in the 91st minute and was sent off. Mornington’s bid for another State 1 South-East title started poorly when it went down 1-0 to Manningham United Blues at Dallas Brooks

Park on Saturday. A straight red for veteran Mornington striker Wayne Gordon in the 18th minute had the home side facing an uphill battle. The decisive moment in this contest came in the 23rd minute when a cross from the left came off the shoulder of James Newman as he attempted a header and beat Mornington keeper Liam Little. The 10 men pressed for an equaliser in the second half but Sammy Orritt’s volley from the left of the area sailed over. Mornington came closest to scoring when a superb Curtis Hutson cross in the 77th minute from the left picked out big Max Etheridge whose goal-bound touch was instinctively tipped onto the bar by Manningham keeper Stefan Taleski before being scrambled clear for a corner. Peninsula Strikers went down 3-1 away to Brandon Park in their re-

arranged State 2 South-East fixture on Saturday. Maxim Avram (2) and Sam Nikolovski scored for Brandon Park with Ryan Wilson scoring for Strikers. State 3 South-East promotion candidates Monbulk Rangers and Skye United clashed at Monbulk Recreation Reserve on Friday night with the home team winning 2-1. Scores were level at the break but five minutes into the second half Monbulk captain Geordie Scott broke into a one-on-one and put the hosts ahead. Skye began to panic for the remainder of the half as chances went begging and a clinical finish from Arash Sadeghi in the 75th minute gave Monbulk a two-goal buffer. Skye’s Mitch Blake pulled one back five minutes from time to ensure a tense finish but despite Skye’s pressure, it couldn’t grab the equaliser. Teenage midfielder Jack Gallagher signed with Skye last week and scored in the reserves before coming off the bench in the second half to replace Chris Driver. A pre-game injury to Mark O’Connor had sidelined the Irish midfielder whose place in the starting line-up was taken by Driver. Two other Skye midfielders are injured. Cameron Leopold had to come off against Monbulk with a broken toe while youngster Jordan Redburn was unavailable as he battles to overcome a hip injury. Defender Johnny Andrinopoulos remains sidelined by an Achilles strain. Off the field, Skye fared far better last week when local state government MP Sonya Kilkenny announced a $945,000 upgrade to the clubrooms at Skye Recreation Reserve. Seaford United looks set for another testing season after being thumped 6-0 by Brighton in their State 3 South-East contest at North Seaford Reserve on Saturday. Dylan Waugh had flirted with joining Strikers during the pre-season but returned to the fold and rejoined Seaford last week but was unable to have an impact in what was a dismal opening-round display by Paulo Pinheiro’s men. Three goals in six minutes allowed Brighton the luxury of a 3-0 halftime lead and effectively ended the contest. Jared Ekkel had spent the opening half-hour strolling about in midfield and distributing the ball at his leisure and in the 34th minute his first strike was parried by young Seaford keeper Austin Kearney who was helpless to

stop Ekkel’s close-range follow-up attempt. Two minutes later Michael Knott turned Daniel Mota inside out then struck a low shot past the diving Kearney to make it 2-0. As if to rub salt into Seaford’s wounds the move down Brighton’s right in the 40th minute was clearly offside but play continued and a low cross to the far post set up Nick Bale for a tap-in. Bale repeated the dose from close range in the 53rd minute to make it 4-0 then a simple inter-passing move involving Louis Hughes, Bale and David Nicholas ended with Nicholas in a one-on-one with Kearney and making no mistake from 10 metres for number five. Ekkel’s low shot from just outside the area in the 72nd minute made it 6-0 and a combination of inept finishing and a couple of good reflex saves from Kearney saved Seaford from an absolute shellacking. “I think it’s going to be a long, hard season,” said a Seaford insider at the final whistle and no-one disagreed. Baxter’s State 4 South campaign got off to a disastrous start with a 7-2 home loss to Monash Uni on Saturday. The mood at Baxter was upbeat leading into the clash after young gun Travis Ernsdoerfer returned last week from an NPL2 foray with Langy’s under-20s. But by half-time Monash led 3-1 and went on to record a resounding victory. Izaak Barr and Dan Disseldorp scored for Baxter. Southern United welcomed back Elisabeth Robers last week but lost Sunday’s NPLW clash with Box Hill United 10-1 at Monterey Reserve with Casey Aarons scoring for Southern. The under-12s won 2-0 with goals from Jasmine Smith and Stella Rogers; the under-14s won 9-0 with goals from Rhys McKenna (3), Candy Kilderry (3), Alex Jones, Danica Vukcevic and Alessandra Davis; the under-16s drew 2-2 with goals from Lily Aitken and Monique Lapenta while goals from Mackenzie Hicks and Jess Beddows couldn’t stop the under-19s from going down 4-2 in a much-improved performance. There are no State League or NPLW games over the Easter weekend but Langwarrin, Mornington and Strikers are in action in the fourth round of the FFA Cup. SATURDAY, 3pm: Langwarrin v North Geelong (Lawton Park), Mornington v Peninsula Strikers (Dallas Brooks Park).16s 11.40am, U19s 1.15pm).