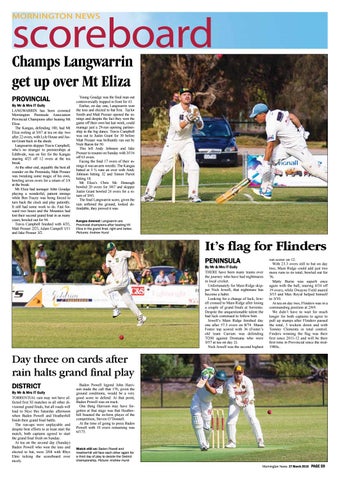 Champs Langwarrin get up over Mt Eliza PROVINCIAL

By Mr & Mrs IT Gully LANGWARRIN has been crowned Mornington Peninsula Association Provincial Champions after beating Mt Eliza. The Kangas, defending 180, had Mt Eliza reeling at 5/47 at tea on day two after 22 overs, with Lyle House and Justin Grant back in the sheds. Langwarrin skipper Travis Campbell, who’s no stranger to premierships at Edithvale, was on fire for the Kangas snaring 4/25 off 12 overs at the tea break. At the other end, arguably the best all rounder on the Peninsula, Matt Prosser was tweaking some magic of his own, bowling seven overs for a return of 1/4 at the break. Mt Eliza had teenager John Goudge playing a wonderful, patient innings while Ben Tracey was being forced to turn back the clock and play patiently. It still had some work to do. Fast forward two hours and the Mounties had lost their second grand final in as many years, bowled out for 94. Travis Campbell finished with 4/35, Matt Prosser 2/25, Adam Campell 1/11 and Jake Prosser 3/2.

Young Goudge was the final man out controversially trapped in front for 43. Earlier, on day one, Langwarrin won the toss and elected to bat first. Taylor Smith and Matt Prosser opened the innings and despite the fact they won the game off their own bat last week, could manage just a 29-run opening partnership in the big dance. Travis Campbell was out to Justin Grant for 30 before Matt Prosser was brilliantly run out by Nick Baron for 50. This left Andy Johnson and Jake Prosser to resume on Sunday with 3/116 off 63 overs. Facing the final 17 overs of their innings it was an arm wrestle. The Kangas batted at 3 ½ runs an over with Andy Johnson hitting 32 and Simon Parrot hitting 18. Mt Eliza’s Chris Mc Donough bowled 20 overs for 3/67 and skipper Justin Grant bowled 24 overs for a return of 3/43. The final Langwarrin score, given the rain softened the ground, looked defendable, they proved it was. Kangas downed: Langwarrin are Provincial champions after beating Mt Eliza in the grand final, right and below. Pictures: Andrew Hurst

By Mr & Mrs IT Gully THERE have been many teams over the journey who have had nightmares in local cricket. Unfortunately for Main Ridge skipper Nick Jewell, that nightmare has become a habit. Looking for a change of luck, Jewell crossed to Main Ridge after losing a couple of grand finals at Sorrento. Despite the unquestionable talent the bad luck continued to follow him. Jewell’s Main Ridge finished day one after 57.3 overs on 8/74. Shaun Foster top scored with 36 (Foster’s old team Carrum was defending 7/200 against Dromana who were 3/57 at tea on day 2). Nick Jewell was the second highest

run scorer on 12. With 23.3 overs still to bat on day two, Main Ridge could add just two more runs to its total, bowled out for 76. Matty Burns was superb once again with the ball, snaring 4/34 off 19 overs, while Dwayne Field snared 3/15 and Max Royal helped himself to 3/10. At tea on day two, Flinders was in a commanding position at 2/69. We didn’t have to wait for much longer for both captains to agree to pull up stumps after Flinders passed the total, 3 wickets down and with Tommy Clements in total control. Finders winning the flag was their first since 2011-12 and will be their first time in Provincial since the mid1980s..

By Mr & Mrs IT Gully TORRENTIAL rain may not have affected first XI matches in all other divisional grand finals, but all roads will lead to Skye this Saturday afternoon when Baden Powell and Heatherhill finish their grand final battle. The run-ups were unplayable and despite best efforts to at least start the match, both captains agreed to start the grand final fresh on Sunday. At tea on the second day (Sunday) Baden Powell who won the toss and elected to bat, were 2/68 with Rhys Elmi ticking the scoreboard over nicely.

Baden Powell legend John Harrison made the call that 170, given the ground conditions, would be a very good score to defend. At that point, Baden Powell was on track. One thing Harrison may have forgotten at that stage was that Heatherhill boasted the in-form player of the competition, Steven O’Donnell. At the time of going to press Baden Powell with 10 overs remaining was 6/175.

Match still on: Baden Powell and Heatherhill will face each other again for a third day of play to decide the District championship. Picture: Andrew Hurst Mornington News 27 March 2018