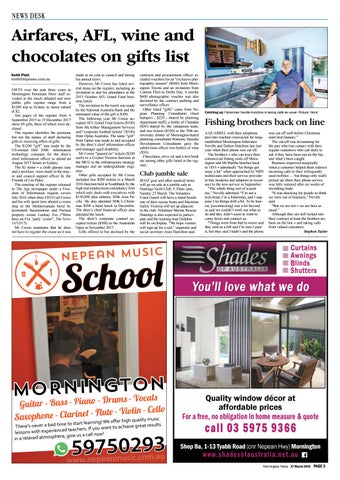 Airfares, AFL, wine and chocolates on gifts list Keith Platt keith@mpnews.com.au GIFTS over the past three years to Mornington Peninsula Shire staff revealed in the much debated and now public gifts register range from a $1200 trip to Sydney to items valued at $2. Ten pages of the register from 4 September 2015 to 19 December 2017 show 69 gifts, three of which were declined. The register identifies the positions but not the names of staff declaring gifts or receiving offers of gifts. The $1200 “gift” was made by the US-owned Dell EMC information technology company for the shire’s chief information officer to attend an August 2017 forum in Sydney. The $2 items – a cloth glasses case and a necklace -were made to the mayor and council support officer by the Friends of Los Palos. The timeline of the register released to The Age newspaper under a Freedom of Information request covers July 2016 when shire CEO Carl Cowie and his wife spent time aboard a cruise ship in the Mediterranean hired by prominent businessman and Portsea property owner Lindsay Fox ("Shire boss on Fox ‘party’ cruise", The News 11/12/17). Mr Cowie maintains that he does not have to register the cruise as it was

made at no cost to council and during his annual leave. However, Mr Cowie has listed several items on the register, including an invitation to and his attendance at the 2015 October AFL Grand Final business lunch. The invitation to the lunch was made by the National Australia Bank and the estimated value of the gift is $300. The following year Mr Cowie accepted AFL Grand Final tickets ($100) from McArthur Management Services and “corporate football tickets” ($100) from Optus Australia. The same “gift” from Optus was made to and accepted by the shire’s chief information officer and manager aged disability. Mr Cowie “passed on” tickets ($200 each) to a Cricket Victoria function at the MCG to the infrastructure strategy manager and an undergraduate engineer. Other gifts accepted by Mr Cowie included two $200 tickets to a March 2016 function held at Southbank by the high end employment consultancy firm which only deals with executives with $150,000 plus salaries, SHK Asia Pacific. He also attended SHK’s Christmas $300 a head lunch in December. The shire’s chief financial officer also attended the lunch. The shire’s corporate counsel accepted tickets ($300) to the Australian Open in November 2017. Gifts offered to but declined by the

contracts and procurement officer included vouchers for an “exclusive photographic session” ($600) from Mornington Toyota and an invitation from Custom Fleet to Derby Day. A similar $600 photographic voucher was also declined by the contract auditing and surveillance officer. Other listed “gifts” came from Nepean Planning Consultants (food hampers - $220 - shared by planning department staff); a bottle of Chandon ($30) shared by the valuations team; and two tickets ($100) to the 70th anniversary dinner of Mornington-based planning consultants Watsons; Speedie Development Consultants gave the subdivision officer two bottles of wine ($50). Chocolates, olive oil and a text book are among other gifts listed in the register.

Club jumble sale BOAT gear and other nautical items will go on sale at a jumble sale at Hastings Yacht Club, 9.30am-1pm, Sunday 25 March. The Volunteer Coast Guard will have a stand beside one of their rescue boats and Maritime Safety Victoria will set up adjacent to the club. Volunteer Marine Rescue Hastings is also expected to participate and the training boat Dolphin will be on display. “We hope visitors will sign up for a sail,” organiser and social secretary Josie Hamilton said.

Fishing brothers back on line A QUARREL with their telephone provider reached crisis-point for longestablished Mornington fishermen Neville and Dalton Hutchins late last year when their phone was cut off. The brothers – who can trace their commercial fishing roots off Mornington and Mt Martha beaches back to 1855 – admittedly “let things get away a bit” when approached by NBN technicians and their service provider to buy modems and adaptors to reconnect to the new service in September. “The whole thing sort of scared me,” Neville admitted. “I’m not a tech-head, I’m a fisherman, and I suppose I let things drift a bit. To be honest, [reconnecting] was a bit beyond us and we couldn’t work out what to do and they didn’t seem to want to come down and connect us. “Things went from bad to worse and they sent us a bill and I’m sure I paid it, but they said I hadn’t and the phone

was cut off well before Christmas until mid-January.” The cut-off was devastating for the pair who lost contact with their regular customers who call daily to ask if they have been out on the bay and what’s been caught. Business improved marginally when a customer helped them redirect incoming calls to their infrequently used mobiles … but things only really picked up when their phone service was fully restored after six weeks of dwindling trade. “It was shocking for people to think we were out of business,” Neville said. “But we are not – we are here as usual.” Although they are still locked into their contract at least the brothers are back on the line – and taking calls from valued customers. Stephen Taylor

oﬀ e to start learning! We tim d lts ba a r ve ne e's er Th nt to achieve great resu wa u yo If rs. he ac te ed lessons with experienc e, give us a call now! er ph in a relaxed atmos