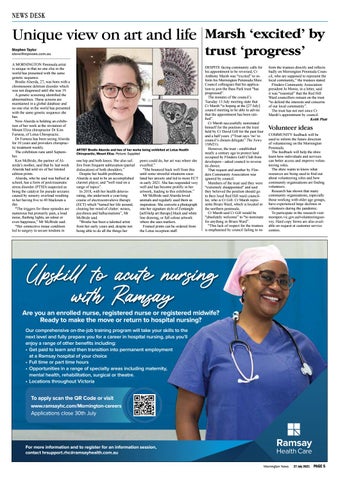 A MORNINGTON Peninsula artist is unique in that no one else in the world has presented with the same genetic sequence. Brodie Alserda, 27, was born with a chromosome deletion disorder which was not diagnosed until she was 19. A genetic screening identified the abnormalities. These screens are maintained in a global database and no one else in the world has presented with the same genetic sequence she has. Now Alserda is holding an exhibition of her work at the invitation of Mount Eliza chiropractor Dr Kim Furness, of Lotus Chiropractic. Dr Furness has been seeing Alserda for 10 years and providers chiropractic treatment weekly. The exhibition runs until September. Ken McBride, the partner of Alserda’s mother, said that by last week Alserda had sold six of her limited edition prints. Alserda, who he said was bullied at school, has a form of post-traumatic stress disorder (PTSD) suspected as being the catalyst for pseudo seizures caused by sensory overload resulting in her having five to 40 blackouts a day. “The triggers for these episodes are numerous but primarily pain, a loud noise, flashing lights, an odour or even happiness,” Mr McBride said. “Her connective tissue condition led to surgery to secure tendons in

DESPITE facing community calls for his appointment to be reversed, Cr Anthony Marsh was “excited” to inform his Mornington Peninsula Shire Council colleagues that his application to join the Bass Park trust “has progressed”. The minutes of the council’s Tuesday 13 July meeting state that Cr Marsh “is hoping at the [27 July] council meeting to be able to advise that the appointment has been ratified”. Cr Marsh successfully nominated himself for the position on the trust held by Cr David Gill for the past four and a half years (“Trust says ‘no’ to council’s chosen delegate” The News 15/6/21). However, the trust - established nearly a century ago to protect land occupied by Flinders Golf Club from developers - asked council to reverse its choice. That request and another by Flinders Community Association was ignored by council. Members of the trust said they were “extremely disappointed” and said they believed the position should go to their local Red Hill ward councillor, who is Cr Gill. Cr Marsh represents Briars Ward, which is located in the northern peninsula. Cr Marsh said Cr Gill would be “absolutely welcome” to “to nominate for anything in Briars Ward”. “This lack of respect for the trustees is emphasised by council failing to in-

one hip and both knees. She also suffers from frequent subluxation (partial dislocation) of both shoulders.” Despite her health problems, Alserda is said to be an accomplished clarinet player, and “well read on a range of topics”. In 2018, with her health deteriorating, she underwent a year-long course of electroconvulsive therapy (ECT) which “turned her life around, clearing her mind of clutter: noises, psychosis and hallucinations”, Mr McBride said. “Brodie has been a talented artist from her early years and, despite not being able to do all the things her

peers could do, her art was where she excelled.” “She bounced back well from this until some stressful situations escalated her anxiety and led to more ECT in early 2021. She has responded very well and has become prolific in her artwork, leading to this exhibition.” Mr McBride said Alserda loved animals and regularly used them as inspiration. She converts a photograph into her signature style of Zentangle [self-help art therapy] black and white line drawing, or full colour artwork where she uses markers. Framed prints can be ordered from the Lotus reception staff.

form the trustees directly and reflects badly on Mornington Peninsula Council, who are supposed to represent the local community,” the trustees stated. Flinders Community Association president Jo Monie, in a letter, said it was “essential” that the Red Hill Ward councillors remain on the trust “to defend the interests and concerns of our local community”. The trust has not met since Cr Marsh’s appointment by council. Keith Platt

Volunteer ideas COMMUNITY feedback will be used to inform the future direction of volunteering on the Mornington Peninsula. The feedback will help the shire learn how individuals and services can better access and improve volunteering roles. The shire wants to know what resources are being used to find out about volunteering roles and how community organisations are finding volunteers. Research has shown that many community organisations, especially those working with older age groups, have experienced large declines in volunteers during the pandemic. To participate in the research visit: mornpen.vic.gov.au/volunteeringsurvey. Hard copy forms are also available on request at customer service centres.

Upskill to acute nursing with Ramsay

Are you an enrolled nurse, registered nurse or registered midwife? Ready to make the move or return to hospital nursing? Our comprehensive on-the-job training program will take your skills to the next level and fully prepare you for a career in hospital nursing, plus you’ll enjoy a range of other benefits including: • Get paid to learn and then transition into permanent employment at a Ramsay hospital of your choice • Full time or part time hours • Opportunities in a range of specialty areas including maternity, mental health, rehabilitation, surgical or theatre. • Locations throughout Victoria

To apply scan the QR Code or visit www.ramsayhc.com/Mornington-careers

For more information and to register for an information session, contact hrsupport.rhc@ramsayhealth.com.au Mornington News