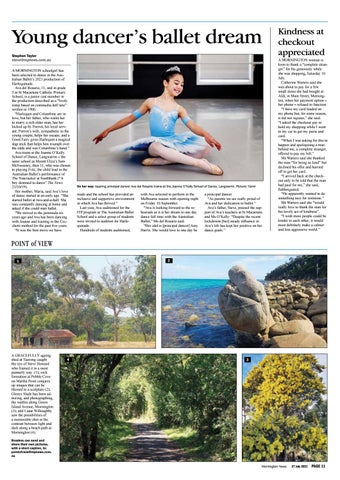 Young dancer’s ballet dream Stephen Taylor steve@mpnews.com.au A MORNINGTON schoolgirl has been selected to dance in the Australian Ballet’s 2021 production of Harlequinade. Ava del Rosario, 11, and in grade 5 at St Macartens Catholic Primary School, is a junior cast member in the production described as a “lively romp based on commedia dell’arte” written in 1900. “Harlequin and Columbine are in love, but her father, who wants her to marry a rich older man, has her locked up by Pierrot, his loyal servant. Pierrot’s wife, sympathetic to the young couple, helps her escape, and a Good Fairy gives Harlequin a magical slap stick that helps him triumph over the odds and win Columbine’s hand.” Ava trains at the Joanne O’Kelly School of Dance, Langwarrin – the same school as Mount Eliza’s Sam McSweeney, then 11, who was chosen to playing Fritz, the child lead in the Australian Ballet’s performance of The Nutcracker at Southbank (“A boy destined to dance” The News 21/10/19). Her mother, Maria, said Ava’s love of dance started at an early age. “She started ballet at two-and-a-half. She was constantly dancing at home and asked if she could start ballet. “We moved to the peninsula six years ago and Ava has been dancing with Joanne and training in the Cecchetti method for the past five years. “It was the best move we have

made and the school has provided an inclusive and supportive environment in which Ava has thrived.” Last year, Ava auditioned for the ITP program at The Australian Ballet School and a select group of students were invited to audition for Harlequinade. Hundreds of students auditioned,

with Ava selected to perform in the Melbourne season with opening night on Friday 10 September. “Ava is looking forward to the rehearsals as it is her dream to one day dance full time with the Australian Ballet,” Ms del Rosario said. “Her idol is [principal dancer] Amy Harris. She would love to one day be

a principal dancer. “As parents we are really proud of Ava and her dedication to ballet.” Ava’s father, Steve, praised the support of Ava’s teachers at St Macartans and Ms O’Kelly: “Despite the recent lockdowns [her] steady influence in Ava’s life has kept her positive on her dance goals.”

Kindness at checkout appreciated A MORNINGTON woman is keen to thank a “complete stranger” for his generosity while she was shopping, Saturday 10 July. Catherine Warters said she was about to pay for a few small items she had bought at Aldi, in Main Street, Mornington, when her payment option – her phone – refused to function. “I have my card loaded on my phone but, for some reason, it did not register,” she said. “I asked the checkout guy to hold my shopping while I went to my car to get my purse and card. “When I was asking for this to happen and apologising a man behind me, a complete stranger, offered to pay my bill.” Ms Warters said she thanked the man “for being so kind” but declined his offer and hurried off to get her card. “I arrived back at the checkout only to be told that the man had paid for me,” she said, flabbergasted. “He apparently wanted to do something nice for someone.” Ms Warters said she “would really love to thank the man for his lovely act of kindness”. “I wish more people could be kinder to each other; it would most definitely make a calmer and less aggressive world.”

A GRACEFULLY ageing shed at Tuerong caught the eye of Steve Howard who framed it in a most painterly way (1); rock formation at Pebble Cove on Martha Point conjures up images that can be likened to a sculpture (2); Glenys Slade has been admiring, and photographing, the wattles along Green Island Avenue, Mornington (3); and Liane Willoughby saw the possibilities of a memorable shot in the contrast between light and dark along a beach path at Mornington (4).

Readers can send and share their own pictures, with a short caption, to: pointofview@mpnews.com. au Mornington News