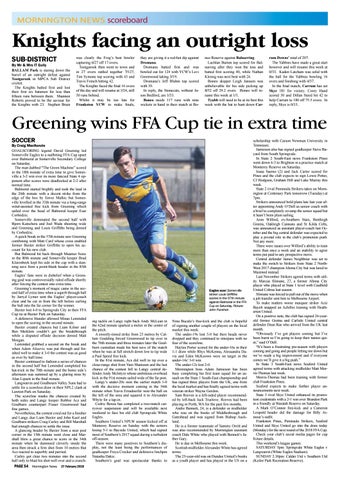 By Mr & Mrs IT Gully BALLAM Park is staring down the barrel of an outright defeat against Tootgarook in MPCA Sub District cricket. The Knights batted first and lost their first six batsmen for less than fifteen runs between them. Shannon Roberts proved to be the saviour for the Knights with 23. Stephen Brain

was clearly the Frog’s best bowler capturing 6/27 off 17 overs. Tootgarook then went to town and in 27 overs rattled together 7/127, Tim Symons top scoring with 43 and Travis French hitting 42. The Knights faced the final 16 overs of the day and will resume at 1/24, still 50 runs behind. Whilst it may be too late for Frankston YCW to make finals,

they are giving it a red-hot dip against Dromana. Dromana batted first and was bowled out for 124 with YCW’s Levi Greenwood taking 3/19. Dromana’s Jeff Bluhm top scored with 39. In reply, the Stonecats, without Jason Bedford, are 1/33. Boneo needs 117 runs with nine wickets in hand in their match at Bo-

neo Reserve against Balnarring. Lachlan Barton top scored for Balnarring after they won the toss and batted first scoring 40, while Nathan Kleinig was next best with 24. Boneo skipper Leigh Janssen was unbelievable for his side picking up 8/52 off 29.2 overs. Boneo will resume this week at 1/1. Tyabb will need to be at its best this week with the bat to hunt down Car-

By Craig MacKenzie GOALSCORING legend David Greening led Somerville Eagles to a nailbiting FFA Cup upset over Balmoral at Somerville Secondary College on Saturday. The man dubbed “The Green Machine” scored in the 18th minute of extra time to give Somerville a 3-2 win over its more fancied State 4 opponent after scores were deadlocked at 2-2 after normal time. Balmoral started brightly and took the lead in the 26th minute with a decent strike from the edge of the box by Enver Malkic but Somerville levelled in the 35th minute via a long-range wind-assisted free kick from Greening which sailed over the head of Balmoral keeper Esar Corhodzic. Somerville dominated the second half with Bjorn Kutschera and Joel Wade shooting wide and Greening and Louis Griffiths being denied by Corhodzic. A quick break in the 57th minute saw Greening combining with Matt Curd whose cross enabled former Baxter striker Griffiths to open his account for his new club. But Balmoral hit back through Muamer Sosic in the 80th minute and Somerville keeper Brad Klarenbeek kept his side in the cup with a stunning save from a point-blank header in the 85th minute. Eagles’ fans were in disbelief when a Greening goal was controversially ruled offside shortly after forcing the contest into extra time. Greening’s moment of magic came in the second half of extra time when a superb through ball by Jarryd Lymer sent the Eagles’ player-coach clear and he cut in from the left before curling the ball into the far corner for the winner. Baxter lost 4-0 to Springvale City in their FFA Cup tie at Baxter Park on Saturday. A defensive blunder allowed Minas Leminded to open the scoring in the second minute. Baxter created chances but Liam Kilner and Ben Meiklem couldn’t get the breakthrough while a disputed offside decision denied Matt Morgan. Leminded grabbed a second on the break and when Adem Alicevic was put through and finished well to make it 3-0 the contest was as good as over by half-time. Baxter continued to fashion a series of chances in the second half but Leminded completed his hat-trick in the 70th minute and the home side’s afternoon was summed up by a glaring miss by Alan Lipsett in the final minute. Langwarrin and Goulbourn Valley Suns had to settle for a scoreless draw in their NPL2 clash at Lawton Park on Saturday. The scoreline masks the chances created by both sides and Langy keeper Robbie Acs and Goulburn counterpart Fraser Greenwood had fine games. Nevertheless, the contest cried out for a finisher and Langy duo Liam Baxter and John Kuol and Goulburn strikers Craig Carley and Bill Marshall had enough chances to settle the issue. A glancing header by Baxter from a near post corner in the 15th minute went close and Marshall blew a great chance to score in the 34th minute when he dummied cleverly inside the area then struck a firm shot from 10 metres that Acs reacted to superbly and parried. Carley got clear two minutes into the second half only to blast his shot well over and a crunch-

ing tackle on Langy right back Andy McLean in the 62nd minute sparked a melee in the centre of the pitch. A sweetly-timed strike from 25 metres by Callum Goulding forced Greenwood to tip over in the 76th minute and three minutes later the Goulburn custodian made his best save of the match when he was at full stretch down low to tip wide a Paul Speed free kick. In the 81st minute, Acs did well to tip over a close-range shot from Vani Shamoon and the last chance of the contest fell to Langy central defender Andy McIntyre whose ambitious overhead kick in the 91st minute sailed wide of the far post. Langy’s under-20s won the earlier match 1-0 with the decisive moment coming in the 54th minute when Travis Ernsdoerfer won the ball on the left of the area and squared it to Alexander Whyte for a tap-in. Cedric Benza has completed a two-match carryover suspension and will be available next weekend to face his old club Springvale White Eagles. Southern United’s NPLW season kicked off at Monterey Reserve on Sunday with the seniors losing 5-1 to Bayside United, which had signed most of Southern’s 2017 squad during a turbulent off-season. There were many positives to Southern’s display, not the least being the performances of goalkeeper Freya Crocker and defensive linchpin Natasha Dakic. Southern’s goal was spectacular thanks to

Nina Bucalo’s free-kick and the club is hopeful of signing another couple of players on the local market this week. The under-19s lost 5-0 but their heads never dropped and they continued to interpass with no fear of the scoreline. Haylea Porter scored for the under-16s in their 1-1 draw while Rhys McKenna, Alessandra Davis and Eden McKeown were on target in the under-14s’ 3-0 win. The under-12s lost 2-0. Mornington boss Adam Jamieson has been busy completing his first team squad for an assault on the State 1 South-East championship and has signed three players from the UK, one from the local market and has finally agreed terms with veteran striker Wayne Gordon. Sam Reeves is a left-sided player recommended by left-back Jack Truelove. Reeves had been playing in Perth, WA for the past few months. Andre Bennett, 24, is a defender or midfielder who was on the books of Middlesbrough and Gateshead and was signed from Bishop Auckland. He is a former teammate of Sammy Orritt and was also recommended by Mornington assistant coach Dale White who played with Bennett’s father Gary. He is due in Melbourne this week. Scottish midfielder Alexander White has agreed terms. The 25-year-old was on Dundee United’s books as a youth player and has played in the US on a

scholarship with Carson Newman University in Tennessee. Jamieson also has signed goalkeeper Steve Bayard from South Springvale. In State 2 South-East news Frankston Pines went down 4-3 to Brighton in a practice match at Monterey Reserve on Saturday. Ioasa Saemo (2) and Jack Carter scored for Pines and the club expects to sign Lewis Potter, CJ Hodgson, Graham Hill and Luke Murray this week. State 2 rival Peninsula Strikers takes on Mornington at Centenary Park tomorrow (Tuesday) at 7pm. Strikers announced bold plans late last year after appointing Andy O’Dell as senior coach with a brief to completely revamp the senior squad but it hasn’t been plain sailing. Aron Wilford, ex-Southern Stars, Bentleigh Greens, Oakleigh Cannons and St Kilda Celts, was announced as assistant player-coach last October and the big central defender was expected to play a pivotal role in the club’s promotion push. Not any more. There were issues over Wilford’s ability to train more than once a week and an inability to agree terms put paid to any prospective move. Central defender James Neighbour was set to make the switch to Strikers from State 2 NorthWest 2017 champion Altona City but was lured to Mazenod instead. Last November Strikers agreed terms with utility Marcus Slimane, 27, a former Altona City player who played at State 1 level with Caulfield United Cobras last season. Slimane was forced to pull out of the move when a job transfer sent him to Melbourne Airport. To make matters worse marquee striker Aziz Bayeh snapped an Achilles training with Heatherton United. On a positive note, the club has signed 26-yearold former Gretna and Carlisle United central defender Dean Rae who arrived from the UK last month. “Obviously I’ve got players coming but I’ve been burnt so I’m going to keep their names quiet,” said O’Dell. “It’s been a frustrating pre-season with players coming and going and people letting me down but we’ve made a big improvement and if everyone comes we’ll give it a big push.” In State 3 South-East news Seaford United agreed terms with attacking midfielder Matt Morris-Thomas last week. Morris-Thomas had been training with former club Frankston Pines. Seaford expects to make further player announcements next week. State 3 rival Skye United enhanced its promotion credentials with a 2-1 win over Brandon Park in a friendly at Waratah Reserve on Saturday. A Mark O’Connor free-kick and a Cameron Leopold header did the damage for Billy Armour’s outfit. Frankston Pines, Peninsula Strikers, Seaford United and Skye United go into the draw today (Monday) for the next round of the 2018 FFA Cup. Check your club’s social media pages for cup fixture details. This weekend’s league games: SATURDAY 5pm: Springvale White Eagles v Langwarrin (White Eagles Stadium). SUNDAY 2.30pm: Calder Utd v Southern Utd (Keilor Park Recreation Reserve).