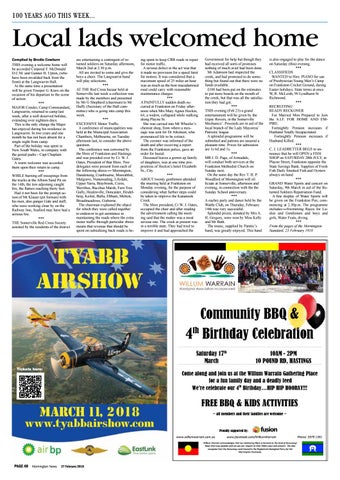 Local lads welcomed home Compiled by Brodie Cowburn THIS evening a welcome home will be accorded Corporal F. McDonald D.C.M. and Gunner H. Upton, (who have been invalided back from the front) at the Langwarrin Hall. At the same time a presentation will be given Trooper G. Knox on the occasion of his departure to the scene of action. *** MAJOR Conder, Camp Commandant, Langwarrin, returned to camp last week, after a well deserved holiday, extending over eighteen days. This is the only change the Major has enjoyed during his residence in Langwarrin. In two years and one month he has not been absent for a single night from camp. Part of the holiday was spent in New South Wales, in company with the genial padre - Capt Chaplain Gates. A warm welcome was accorded them upon their return to camp. *** WHILE burning off sweepings from the trucks at the Albion Sand Pit on the 14th, the tree adjoining caught fire, the flames reaching thirty feet. Had it not been for the prompt action of Mr Klauer (pit forman) with his men, also ganger Gale and staff, who were working close by on the Railway line, Seaford may have had a serious fire. *** THE Somerville Red Cross Society assisted by the residents of the district

are entertaining a contingent of returned soldiers on Saturday afternoon, March 2nd at 2.30 p.m. All are invited to come and give the boys a cheer. The Langwarrin band will play selections. *** AT THE Red Cross bazaar held at Somerville last week a collection was made by the members and presented by Mr G Shepherd (chairman) to Mr Duffy (Secretary of the Hall committee) who is going into camp this week. *** EXCESSIVE Motor Traffic. A conference of municipalities was held at the Municipal Association Chambers, Melbourne, on Tuesday afternoon last, to consider the above question. The conference was convened by the Shire of Frankston and Hastings. and was presided over by Cr. W. J. Oates, President of that Shire. Two delegates were present from each of the following shires:— Mornington, Dandenong, Cranbourne, Moorabbin, Mulgrave, Nunawading, Lilydale, Upper Yarra, Braybrook, Corio, Werribee, Bacchus Marsh, Fern Tree Gully, Healesville, Doncaster, Heidelberg, Keilor, Bulla, Eltham, Melton, Broadmeadows, Gisborne. The chairman explained the object for which they were called together to endeavor to get assistance in maintaining the roads where the extra motor traffic through particular shires means that revenue that should be spent on subsidising back roads is be-

ing spent to keep CRB roads in repair for motor traffic. A serious defect in the act was that it made no provision for a speed limit for motors. It was considered that a maximum speed of 25 miles an hour was as much as the best macadamised road could carry with reasonable maintenance charges. *** A PAINFULLY sudden death occurred at Frankston on Friday afternoon when Mrs Mary Agnes Hockin, 64, a widow, collapsed while walking along Playne St. She was carried into Mr Wheeler’s chemist shop, from where a message was sent for Dr Atkinson, who pronounced life to be extinct. The coroner was informed of the death and after receiving a report from the Frankston police, gave an order for burial. Deceased leaves a grown up family of daughters, was at one time proprietress of Hockin’s hotel Elizabeth St., City *** ABOUT twenty gentlemen attended the meeting held at Frankston on Monday evening, for the purpose of considering what further steps could be taken to improve the Kananook Creek. The Shire president, Cr W. J. Oates, occupied the chair and after reading the advertisment calling the meeting said that the matter was a most serious one. The creek at present was in a terrible state. They had tried to improve it and had approached the

Governmeet for help but though they had received all sorts of promises nothing of much avail had been done. Mr Adamson had inspected the creek, and had promised to do something but found out that there were no funds available. £100 had been put on the estimates to put more boards on the mouth of the creek, but that was all the satisfaction they had got. *** THIS evening (Feb 23) a grand entertainment will be given by the Gipsy Rovers, in the Somerville Mechanics’. Proceeds are in aid of the local branch of the Lady Mayoress’ Patriotic league. A splendid programme will be submitted and patrons are assured a pleasant time. Prices for admission are 1s 6d and 1s. *** MR J. D. Page, of Armadale, will conduct both services at the Frankston Methodist Church on Sunday next. On the same day the Rev T. H. P. Woodford of Mornington will officiate at Somerville, afternoon and evening, in connection with the the Sunday School anniversary. *** A euchre party and dance held by the Wattle Club, on Thursday, February 14th was very successful. Splendid prizes, donated by Mrs A. H. Gregory, were won by Miss Kelly and Mr Bath. The music, supplied by Panttic’s band, was greatly enjoyed. This band

is also engaged to play for the dance on Saturday (this) evening. *** CLASSIFIEDS WANTED to Hire. PIANO for use of Presbyterian Young Men’s Camp on Frankston Cricket Ground, during Easter holidays. State terms at once. W, R. McLeish, 90 Lyndhurst St Richmond. *** RECRUITING READY RECKONER For Married Men Prepared to Join the A.I.F. FOR HOME AND EMPIRE. Fortnightly Pension increases if Husband Totally Incapacitated. Fortnightly Pension increases if Husband Killed. *** C. J. LEADBETTER BEGS to announce that he will OPEN a FISH SHOP on SATURDAY 28th JULY, in Playne Street, Frankston opposite the State Savings Bank. Supplies of Fresh Fish Daily Smoked Fish and Oysters always on hand *** GRAND Water Sports and concert on Saturday, 9th March in aid of the Returned Soldiers Repatriation Fund. A fine display of Water Sports will be given on the Frankston Pier, commencing at 2.30p.m. The programme includes:—Swimming Races for Ladies and Gentlemen and boys and girls, Water Feats, diving. *** From the pages of the Mornington Standard, 23 February 1918

Come along and join us at the Willum Warrain Gathering Place for a fun family day and a deadly feed We’re celebrate our 4th Birthday…HIP HIP HOORAY!!!

FREE BBQ & KIDS ACTIVITIES ~ all members and their families are welcome ~

Willum Warrain acknowledges that our Gathering Place is located on the land of Bunurong/ Boon Wurrung peoples and we pay our respect to their Elders past and present. We also recognise that the Bunurong Land Council is the Registered Aboriginal Party for the Mornington Peninsula.