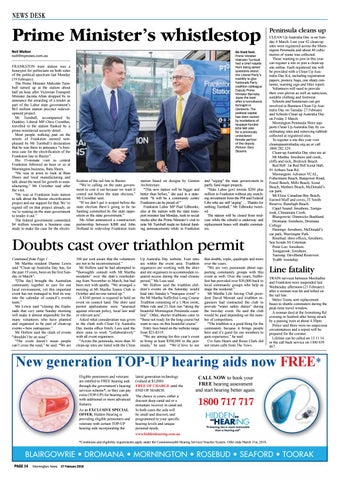 Prime Minister’s whistlestop Neil Walker neil@mpnews.com.au FRANKSTON train station was a honeypot for politicians on both sides of the political spectrum last Monday (19 February). The Prime Minister Malcolm Turnbull turned up at the station about half an hour after Victorian Transport Minister Jacinta Allan dropped by to announce the awarding of a tender as part of the Labor state government’s $63 million station precinct redevelopment project. Mr Turnbull, accompanied by Dunkley Liberal MP Chris Crewther, travelled to the station flanked by a prime ministerial security detail. Most people walking past on the streets of Frankston seemed nonplussed by Mr Turnbull’s declaration that he was there to announce “a business case for the electrification of the Frankston line to Baxter”. His 15-minute visit to central Frankston followed an hour or so at Mornington business, Bata Shoes. “He was in town to look at Bata Shoes and local manufacturing and talk about the need for growth in manufacturing,” Mr Crewther said after the visit. “He was at Frankston train station to talk about the Baxter electrification project and our support for that. We’ve signed off on that project already, so we’re waiting on the state government to tender it out.” The federal government committed $4 million towards a business case study to make the case for the electri-

On front foot: Prime Minister Malcolm Turnbull had a brief respite from being asked questions about the Liberal Party’s inability to give Nationals Party coalition colleague Deputy Prime Minister Barnaby Joyce the boot after a tumultuous fortnight in Canberra. The political capital has been rocked by revelations of taxpayer-funded jobs last year for a previously undeclared female partner of the deputy. Picture: Gary Sissons

station based on designs by Genton Architecture. “This new station will be bigger and better than before,” she said in a statement. “It will be a community centre Frankston can be proud of.” Frankston Labor MP Paul Edbrooke, also at the station with the state transport minister last Monday, took to social media after the Prime Minister’s visit to note Mr Turnbull made no federal funding announcements while in Frankston

and "urging" the state govern-ment to partly fund major projects. “State Labor govt invests $200 plus million in Frankston without any matching investment from the PM and Federal Libs who are still 'urging' .... Thanks for nothing Turnbull,” Mr Edbrooke tweeted. The station will be closed from midyear while the rebuild is underway and replacement buses will shuttle commuters.

Doubts cast over triathlon permit Continued from Page 1 Mt Martha resident Dianne Lewis said “Clean up Australia Day has, for the past 19 years, been on the first Sunday in March”. “[The day] brought the Australian community together to care for our local environment, yet this important event has not managed to find its way into the calendar of council’s events team.” Ms Lewis said “closing the Esplanade that very same Sunday morning will make it almost impossible for the many volunteers who have planned and organised to be part of clean-up events – how outrageous.” Mr Hollow said the clash of events “shouldn’t be an issue”. “The event doesn’t mean people can’t cross the road,” he said. “We are

100 per cent aware that the volunteers are not to be inconvenienced.” Mr Hollow said he had attempted to “thoroughly consult with Mt Martha residents” over the date’s rescheduling from November to March, but had been met with apathy. “We arranged a meeting at Mt Martha Tennis Club in October and no-one turned up.” A $160 permit is required to hold an event on council land. The shire said permit applications were “assessed against relevant policy, local law and/ or relevant acts”. Asked what consideration was given to the clash with Clean Up Australia Day media office Emily Lees said the shire aims to work “collaboratively” with all event organisers. “Across the peninsula, more than 30 clean-up sites are listed with the Clean

Up Australia Day website. Four sites are within the event area. Triathlon organisers are working with the shire and site organisers to accommodate required access during the road closure period,” Ms Lees said. Mr Hollow said the triathlon children’s events on the Saturday would lead into Sunday’s “marquee event” – the Mt Martha Sufferfest Long Course Triathlon consisting of a 1.9km swim, 90km ride and 21.1km run “along the beautiful Mornington Peninsula coastline”. Other, shorter triathlons cater to “those not ready for the long course but want to race on this beautiful course”. Entry fees listed on the website range from $25-$319. “We are aiming for this year’s event to bring at least $500,000 to the peninsula,” he said. “We’d love to see

that double, triple, quadruple and more over the years. “We are very passionate about supporting community groups with this event as well. Over the years, Sufferfest has provided over $30,000 back to local community groups who help us stage the weekend.” Mt Martha Life Saving Club president David Mowatt said triathlon organisers had contracted the club to provide “water safety duties” during the two-day event. He said the club would be paid depending on the number of competitors. “The triathlon is a good thing for the community because it brings people here and it’s good for our members to gain experience,” he said. Crs Sam Hearn and Rosie Clark did not return calls from The News.

Line fatality TRAIN services between Mordialloc and Frankston were suspended last Wednesday afternoon (21 February) after a woman was hit and killed on the rail line. Metro Trains sent replacement buses to shuttle commuters during the peak-time travel window. A woman died at the Armstrong Rd crossing in Seaford after being struck by a passing train at about 4.30pm. Police said there were no suspicious circumstances and a report will be prepared for the coroner. Lifeline can be called on 13 11 14 or the call back service on 1300 659 467.

latest generation technology (valued at $3,000) FREE OF CHARGE until the END OF MARCH.