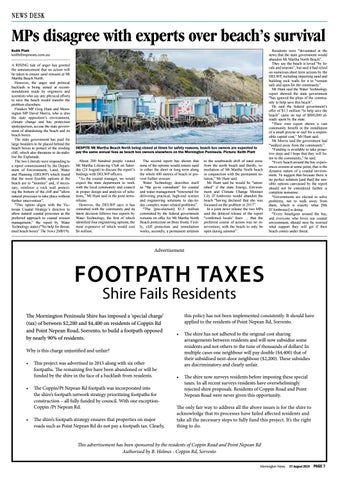 MPs disagree with experts over beach’s survival Keith Platt keith@mpnews.com.au A RISING tide of anger has greeted the announcement that no action will be taken to ensure sand remains at Mt Martha Beach North. However, the anger and political backlash is being aimed at recommendations made by engineers and scientists who say any physical efforts to save the beach would transfer the problem elsewhere. Flinders MP Greg Hunt and Mornington MP David Morris, who is also the state opposition’s environment, climate change and bay protection spokesperson, accuse the state government of abandoning the beach and its beach boxes. The state government has paid for large boulders to be placed behind the beach boxes to protect of the eroding cliff, which also threatens to de-stabilise the Esplanade. The two Liberals were responding to a report commissioned by the Department of Environment, Land, Water and Planning (DELWP) which found that the most feasible options at the beach are to “monitor” and, if necessary, reinforce a rock wall protecting the bottom of the cliff and “allow natural processes to take place without further intervention”. “This option aligns with the Victorian Coastal Strategy’s directive to allow natural coastal processes as the preferred approach to coastal erosion management,” the report by Water Technology states (“No help for threatened beach boxes” The News 20/8/19).

DESPITE Mt Martha Beach North being closed at times for safety reasons, beach box owners are expected to pay the same annual fees as beach box owners elsewhere on the Mornington Peninsula. Picture: Keith Platt About 200 hundred people visited Mt Martha Lifesaving Club on Saturday (24 August) to discuss the report’s findings with DELWP officers. “As the coastal manager, we would expect the state department to work with the local community and council in proper design and analysis of solutions,” Mr Hunt said in the joint newsrelease. However, the DELWP says it has consulted with the community and its latest decision follows two reports by Water Technology, the first of which identified four engineering options, the most expensive of which would cost $4 million.

The second report has shown that none of the options would restore sand in either the short or long term along the whole 600 metres of beach or prevent further erosion Water Technology describes itself as “the go-to consultant” for coastal and water management “renowned for delivering practical, high-end science and engineering solutions to day-today complex water related problems”. “The [pre-election] $1.5 million committed by the federal government remains on offer for Mt Martha North Beach protection on three fronts. Firstly, cliff protection and remediation works, secondly, a permanent solution

to the southwards drift of sand away from the north beach and thirdly, remediation of Mt Martha North beach in conjunction with the permanent solution,” Mr Hunt said. Mr Hunt said he would be “astonished” if the state Energy, Environment and Climate Change Minister Lily D’Ambrosio would abandon the beach “having declared that she was focussed on the problem in 2017”. In a joint news release the two MPs said the delayed release of the report “confirmed locals’ fears … that the preferred course of action was no intervention, with the beach to only be open during summer”.

Residents were “devastated at the news that the state government would abandon Mt Martha North Beach”. They say the beach is loved “by locals and tourists”, but said it had relied on numerous short term actions by the DELWP, including importing sand and building rock walls for it to “remain safe and open for the community”. Mr Hunt said the Water Technology report showed the state government “has ignored the pleas of the community to help save this beach”. He said the federal government’s offer of $1.5 million “to help save the beach” came on top of $800,000 already spent by the state. “Their own report shows a vast community benefit in the installation of a small groyne or reef for a responsible capital cost,” Mr Hunt said. Mr Morris said the government had “walked away from the community”. “Funding is available to take proactive steps and I hope that they will listen to the community,” he said. “Every beach around the bay experiences erosion at some point, that is the dynamic nature of a coastal environment. To suggest that because there is no perfect solution [and that] the sensible options canvassed by the report should not be considered further is complete nonsense. “Governments are elected to solve problems, not to walk away from them, which is exactly what [Ms D’Ambrosio] is doing. “Every beachgoer around the bay, and everyone who loves our coastal environment, should now be worried what support they will get if their beach comes under threat.

The Mornington Peninsula Shire has imposed a ‘special charge’ (tax) of between $2,200 and $4,400 on residents of Coppin Rd and Point Nepean Road, Sorrento, to build a footpath opposed by nearly 90% of residents.

this policy has not been implemented consistently. It should have applied to the residents of Point Nepean Rd, Sorrento. •

The shire has not adhered to the original cost sharing arrangements between residents and will now subsidise some residents and not others to the tune of thousands of dollars! In multiple cases one neighbour will pay double ($4,400) that of their subsidised next-door neighbour ($2,200). These subsidies are discriminatory and clearly unfair.

The shire now surveys residents before imposing these special taxes. In all recent surveys residents have overwhelmingly rejected shire proposals. Residents of Coppin Road and Point Nepean Road were never given this opportunity.

Why is this charge unjustified and unfair? •

This project was advertised in 2015 along with six other footpaths. The remaining five have been abandoned or will be funded by the shire in the face of a backlash from residents. The Coppin/Pt Nepean Rd footpath was incorporated into the shire’s footpath network strategy prioritising footpaths for construction – all fully funded by council. With one exceptionCoppin /Pt Nepean Rd. The shire’s footpath strategy ensures that properties on major roads such as Point Nepean Rd do not pay a footpath tax. Clearly,

The only fair way to address all the above issues is for the shire to acknowledge that its processes have failed affected residents and take all the necessary steps to fully fund this project. It’s the right thing to do.

This advertisement has been sponsored by the residents of Coppin Road and Point Nepean Rd Authorised by B. Holmes - Coppin Rd, Sorrento Mornington News