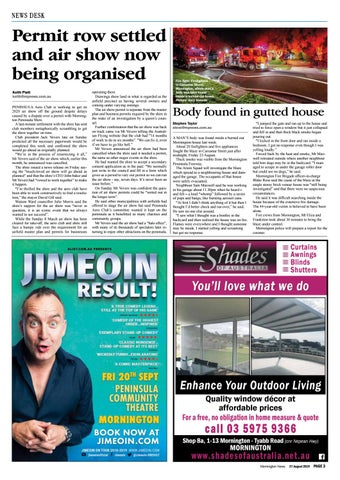 Permit row settled and air show now being organised Keith Platt keith@mpnews.com.au PENINSULA Aero Club is working to get its 2020 air show off the ground despite delays caused by a dispute over a permit with Mornington Peninsula Shire. A last-minute settlement with the shire has sent club members metaphorically scrambling to get the show together on time. Club president Jack Vevers late on Sunday predicted all the necessary paperwork would be completed this week and confirmed the show would go ahead as originally planned. “We’re in the process of resurrecting it all,” Mr Vevers said of the air show which, earlier this month, he announced was cancelled. The shire issued a news release on Friday saying the “much-loved air show will go ahead as planned” and that the shire’s CEO John baker and Mr Vevers had “vowed to work together” to make it happen. “I’m thrilled the shire and the aero club have been able to work constructively to find a resolution,” the mayor David Gill said. Watson Ward councillor Julie Morris said the shire’s support for the air show was “never in question, it is an iconic event that we always wanted to see succeed”. While the Sunday 8 March air show has been cleared for take-off, the aero club and shire still face a bumpy ride over the requirement for an airfield master plan and permits for businesses

operating there. Drawings show land in what is regarded as the airfield precinct as having several owners and coming under varying zonings. The air show permit is separate from the master plan and business permits required by the shire in the wake of an investigation by a queen’s counsel. Further confirmation that the air show was back on track came via Mr Vevers telling the Australian Flying website that the club had “14 months of work to do in six months&quot;. &quot;We can fix it, even if we have to go like hell.” Mr Vevers announced the air show had been cancelled when the shire said it needed a permit, the same as other major events in the shire. He had wanted the shire to accept a secondary consent application as in the past: “We normally just write to the council and fill in a form which gives us a period to vary our permit so we can run the air show - say, seven days. It’s never been an issue before.” On Sunday Mr Vevers was confident the question of air show permits could be “sorted out in the longer term”. He said other municipalities with airfields had offered to stage the air show but said Peninsula Aero Club’s committee wanted it kept on the peninsula as it benefitted so many charities and community groups. Mr Vevers said the air show had a “halo effect”, with many of its thousands of spectators later returning to enjoy other attractions on the peninsula.

Body found in gutted house Stephen Taylor steve@mpnews.com.au A MAN’S body was found inside a burned out Mornington house last week. About 20 firefighters and five appliances fought the blaze in Carramar Street just after midnight, Friday 23 August. Thick smoke was visible from the Mornington Peninsula Freeway. The Arson Squad will investigate the blaze which spread to a neighbouring house and damaged the garage. The occupants of that house were safely evacuated. Neighbour Sam Maxwell said he was working in his garage about 11.30pm when he heard – and felt – a loud “whomp” followed by a series of pops and bangs, like bursting aerosol cans. “At first I didn’t think anything of it but then I thought I’d better check and ran over,” he said. He saw no one else around. “I saw what I thought was a bonfire in the backyard and then realised the house was on fire. Flames were everywhere and I thought someone may be inside. I started yelling and screaming but got no response.

“I jumped the gate and ran up to the house and tried to force open a window but it just collapsed and fell in and then thick black smoke began pouring out. “I kicked in the front door and ran inside a bedroom. I got no response even though I was yelling loudly.” Forced back by the heat and smoke, Mr Maxwell retreated outside where another neighbour told him dogs may be in the backyard. “I managed to scrape in under the garage roller door but could see no dogs,” he said. Mornington Fire Brigade officer-in-charge Blake Ross said the cause of the blaze at the single storey brick veneer house was “still being investigated” and that there were no suspicious circumstances. He said it was difficult searching inside the house because of the extensive fire damage. The 44-year-old victim is believed to have been alone. Fire crews from Mornington, Mt Eliza and Frankston took about 30 minutes to bring the blaze under control. Mornington police will prepare a report for the coroner.

Enhance Your Outdoor Living Quality window décor at affordable prices For a free, no obligation in home measure &amp; quote