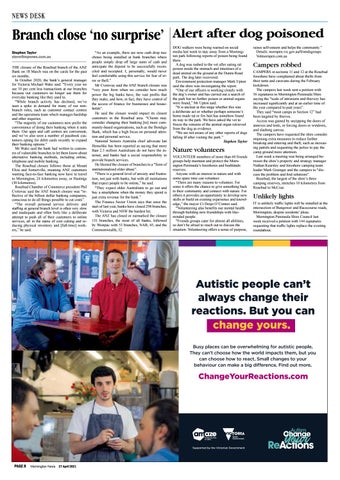 Branch close ‘no surprise’ Alert after dog poisoned Stephen Taylor steve@mpnews.com.au THE closure of the Rosebud branch of the ANZ Bank on 18 March was on the cards for the past six months. In October 2020, the bank’s general manager for Victoria Michael Wake said: “Every year we see 10 per cent less transactions at our branches because our customers no longer use them for everyday banking like they used to. “While branch activity has declined, we’ve seen a spike in demand for many of our nonbranch roles, such as customer contact centres and the operations team which manages hardship and other inquiries. “The majority of our customers now prefer the convenience of doing their banking when it suits them. Our apps and call centres are convenient, and we’ve also seen a number of passbook customers opting for debit cards recently to expand their banking options.” Mr Wake said the bank had written to customers of vulnerable branches to let them know about alternative banking methods, including online, telephone and mobile banking. The Rosebud closure follows those at Mount Eliza and Somerville, meaning ANZ customers wanting face-to-face banking now have to travel to Mornington, 24 kilometres away, or Hastings (30 kilometres). Rosebud Chamber of Commerce president Phil Cvetovac said the ANZ branch closure was “reflective of the billion dollar banking companies, conscious to do all things possible to cut costs”. “The overall personal service delivery and staffing at general branch level is often very slow and inadequate and often feels like a deliberate attempt to push all of their customers to online services, all in the name of cost cutting and reducing physical inventory and [full-time] workers,” he said.

“As an example, there are now cash drop machines being installed at bank branches where people simply drop off large sums of cash and anticipate the deposit to be successfully reconciled and receipted. I, personally, would never feel comfortable using this service for fear of error or theft.” Mr Cvetovac said the ANZ branch closure was “very poor form when we consider how much power the big banks have, the vast profits that they make, and how, in fact, they have control of the access of finance for businesses and households”. He said the closure would impact its closest customers in the Rosebud area. “Clients may consider changing their banking [to] more community-based organisations, such as the Bendigo Bank, which has a high focus on personal attention and personal service. National Seniors Australia chief advocate Ian Henschke has been reported as saying that more than 2.5 million Australians do not have the internet, and banks had a social responsibility to provide branch services. He likened the closure of branches to a “form of institutionalised elder abuse”. “There is a general level of anxiety and frustration, not just with banks, but with all institutions that expect people to be online,” he said. “They expect older Australians to go out and buy a smartphone when the money they spend is just extra revenue for the bank.” The Finance Sector Union says that since the start of last year, banks have closed 298 branches, with Victoria and NSW the hardest hit. The ANZ has closed or earmarked the closure 131 branches, the most of all banks, followed by Westpac with 53 branches, NAB, 45, and the Commonwealth, 32.

DOG walkers were being warned on social media last week to stay away from a Mornington park following reports of poison being found there. A dog was rushed to the vet after eating rat poison inside the stomach and intestines of a dead animal on the ground at the Dunns Road park. The dog later recovered. Environment protection manager Mark Upton said the shire was investigating the report. “One of our officers is working closely with the dog’s owner and has carried out a search of the park but no further poison or animal organs were found,” Mr Upton said. “It is unclear at this stage whether this was a deliberate act or whether perhaps someone’s home made rat or fox bait has somehow found its way to the park. We have asked the vet to freeze the remains of the animal organ retrieved from the dog as evidence. “We are not aware of any other reports of dogs falling ill after visiting the park.” Stephen Taylor

Nature volunteers VOLUNTEER members of more than 60 friends groups help maintain and protect the Mornington Peninsula’s foreshores and bushlands reserves. Anyone with an interest in nature and with some spare time can volunteer. “There are many reasons to volunteer. For some it offers the chance to give something back to their community and connect with nature. For others it provides an opportunity to develop new skills or build on existing experience and knowledge,” the mayor Cr Despi O’Connor said. “Volunteering also benefits our mental health through building new friendships with likeminded people. “Friends groups cater for almost all abilities, so don’t be afraid to reach out to discuss the situation. Volunteering offers a sense of purpose,

Campers robbed CAMPERS in sections 11 and 12 at the Rosebud foreshore have complained about thefts from their tents and caravans during the February lockdown. The campers last week sent a petition with 56 signatures to Mornington Peninsula Shire saying the “scale of intrusions and thievery has increased significantly and at an earlier time of the year compared to past years”. They said “most camps in Section 12” had been targeted by thieves. Access was gained by unzipping the doors of annexes and tents, or forcing doors or windows, and slashing canvas. The campers have requested the shire consider imposing extra measures to reduce further breaking and entering and theft, such as increasing patrols and requesting the police to pay the camp ground more attention. Last week a meeting was being arranged between the shire’s property and strategy manager Nathan Kearsley and foreshore camping team leader Mark Grainger and the campers to “discuss the problem and find solutions”. Rosebud, the largest of the shire’s three camping reserves, stretches 10 kilometres from Rosebud to McCrae.

Unlikely lights IT is unlikely traffic lights will be installed at the intersection of Bungower and Racecourse roads, Mornington, despite residents’ pleas. Mornington Peninsula Shire Council last week received a petition with 144 signatures requesting that traffic lights replace the existing roundabout.