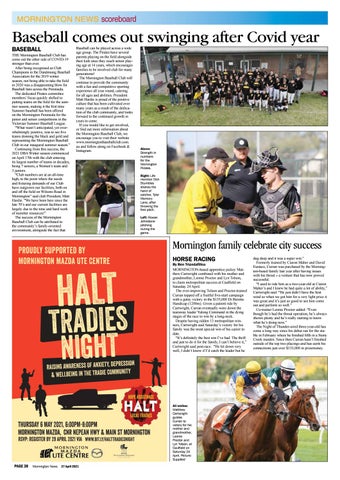 THE Mornington Baseball Club has come out the other side of COVID-19 stronger than ever. After being recognised as Club Champions in the Dandenong Baseball Association for the 2019 winter season, not being able to take the field in 2020 was a disappointing blow for Baseball fans across the Peninsula. The dedicated Pirates committee members’ focus quickly shifted to putting teams on the field for the summer season, making it the first time Summer baseball has been offered on the Mornington Peninsula for the junior and senior competitions in the Victorian Summer Baseball League. “What wasn’t anticipated, yet overwhelmingly positive, was to see five teams donning the black and gold and representing the Mornington Baseball Club in our inaugural summer season.” Continuing from this success, the 2021 DBA Winter season commenced on April 17th with the club entering its largest number of teams in decades, being 7 seniors, a Women’s team and 3 juniors. “Club numbers are at an all-time high, to the point where the needs and fixturing demands of our Club have outgrown our facilities, both on and off the field on Wilsons Road in Mornington” said club President, Matt Hardie. “We have been here since the late 70’s and our current facilities are largely due to the time and hard work of member resources!” The success of the Mornington Baseball Club can be attributed to the community’s family-oriented environment, alongside the fact that

Baseball can be played across a wide age group. The Pirates have several parents playing on the field alongside their kids once they reach senior playing age at 14 years, which encourages families to be involved club for many generations! The Mornington Baseball Club will continue to provide the community with a fun and competitive sporting experience all year round, catering for all ages and abilities. President Matt Hardie is proud of the positive culture that has been cultivated over many years as a result of the dedication of the club community, and looks forward to the continued growth in years to come. If you would like to get involved, or find out more information about the Mornington Baseball Club, we encourage you to visit their website www.morningtonbaseballclub.com. au and follow along on Facebook & Instagram.

Above: Strength in numbers for the Mornington Pirates. Right: Life member Dick Stumbles shakes the hand of catcher, Tyler MemoryLane, after throwing the first pitch. Left: Rowan Johnstone pitching during the game.

By Ben Triandafillou MORNINGTON-based apprentice jockey Matthew Cartwright combined with his mother and grandmother, Leonie Proctor and Lyn Tolson, to claim metropolitan success at Caulfield on Saturday 24 April. The ever-improving Tolson and Proctor-trained Curran topped off a fruitful five-start campaign with a gutsy victory in the $135,000 Di Beretta Handicap (1200m). Given a patient ride by Cartwright, Curran eventually wore down the tearaway leader Yulong Command in the dying stages of the race to win by a long-neck. Despite having ridden 13 metropolitan winners, Cartwright said Saturday’s victory for his family was the most special win of his career to date. “It’s definitely the best win I’ve had. The thrill and just to do it for the family, I can’t believe it,” Cartwright said post-race. “He let down very well, I didn’t know if I’d catch the leader but he

All smiles: Matthew Cartwright guides Curran to victory for his mother and grandmother, Leonie Proctor and Lyn Tolson, at Caulfield on Saturday 24 April. Picture: Supplied

dug deep and it was a super win.” Formerly trained by Ciaron Maher and David Eustace, Curran was purchased by the Mornington-based family last year after having issues with his throat – a venture that has now proved successful. “I used to ride him as a two-year-old at Ciaron Maher’s and I knew he had quite a lot of ability,” Cartwright said. “He just didn’t have the best wind so when we got him for a very light price it was great and it’s just so good to see him come out and perform so well.” Co-trainer Leonie Proctor added: “Even though he’s had the throat operation, he’s always shown plenty and he’s really starting to know what he’s doing now.” The Night of Thunder-sired three-year-old has come a long way since his debut run for the stable in February where he finished fifth in a Stony Creek maiden. Since then Curran hasn’t finished outside of the top two placings and has earnt his connections just over $133,000 in prizemoney.