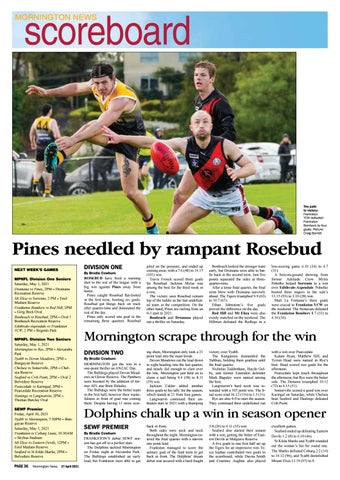 By Brodie Cowburn ROSEBUD have fired a warning shot to the rest of the league with a big win against Pines away from home. Pines caught Rosebud flat-footed in the first term, booting six goals. Rosebud got things back on track after quarter-time and dominated the rest of the day. Pines only scored one goal in the remaining three quarters. Rosebud

piled on the pressure, and ended up coming away with a 7.6 (48) to 14.17 (101) win. Travis French scored three goals for Rosebud. Jackson Mcrae was among the best for the third week in a row. The victory sees Rosebud remain top of the ladder as the last undefeated team in the competition. On the other hand, Pines are reeling from an 0-3 start to 2021. Bonbeach and Dromana played out a thriller on Saturday.

Bonbeach looked the stronger team early, but Dromana were able to battle back in the second term. Just five points separated the sides at threequarter-time. After a tense final quarter, the final siren blew with Dromana narrowly ahead. The Tigers triumphed 9.9 (63) to 10.7 (67). Ethan Johnstone’s five goals proved the difference on the day. Red Hill and Mt Eliza were also evenly matched on the weekend. The Hillmen defeated the Redlegs in a

Mornington scrape through for the win DIVISION TWO

By Brodie Cowburn MORNINGTON got the win in a one-point thriller on ANZAC Day. The Bulldogs played Devon Meadows at Glover Reserve. The Panthers were boosted by the addition of former AFL star Brett Deledio. The Bulldogs were the better team in the first half, however their wastefulness in front of goal was costing them. Despite having 11 more scor-

ing shots, Mornington only took a 21 point lead into the main break. Devon Meadows cut the lead down to eight heading into the last quarter, and nearly did enough to claw over the line. Mornington just held on to claim a nail biting 9.4 (58) to 8.11 (59) win. Jackson Calder added another three goals to his tally for the season, which stands at 21 from four games. Langwarrin continued their unbeaten start to 2021 with a thumping

victory over Tyabb. The Kangaroos dismantled the Yabbies, holding them goalless until the final quarter. Nicholas Tuddenham, Haydn Golby, and former Essendon defender Mark Baguley were named among the best. Langwarrin’s hard work was rewarded with a 105 point win. The final score read 16.12 (116) to 1.5 (11). Rye are also 4-0 to start the season. They continued their undefeated run

with a win over Pearcedale. Kalani Ryan, Matthew Hill, and Tyrren Head were named in Rye’s best. Head scored two goals for the afternoon. Pearcedale kept touch throughout the afternoon, but Rye were the better side. The Demons triumphed 10.12 (72) to 6.15 (51). Somerville scored a good win over Karingal on Saturday, while Chelsea beat Seaford and Hastings defeated Crib Point.

back in front. Both sides were neck and neck throughout the night. Mornington entered the final quarter with a narrow one point lead. Frankston managed to score the solitary goal of the final term to get back in front. The Dolphins’ dream debut was secured with a hard fought

3.8 (26) to 4.11 (35) win. Seaford also started their season with a win, getting the better of Eastern Devils at Mulgrave Reserve. A five goals to one first half set up the Tigers for an impressive win. Erica Saabas contributed two goals to the scoreboard, while Dayna Smith and Courtney Aughtie also played

Dolphins chalk up a win in season opener SEWF PREMIER

By Brodie Cowburn FRANKSTON’S debut SEWF season has got off to a perfect start. The Dolphins tackled Mornington on Friday night at Alexandra Park. The Bulldogs established an early lead, but Frankston were able to get