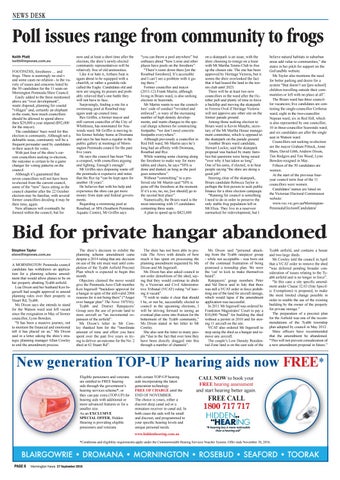 Poll issues range from community to frogs Keith Platt keith@mpnews.com.au FOOTPATHS, foreshores â&#x20AC;Ś and frogs. There is seemingly no end â&#x20AC;&#x201C; and some cases no relation - to the variety of issues and concerns listed by the 50 candidates for the 11 seats on Mornington Peninsula Shire Council. Easily added to the three mentioned above are â&#x20AC;&#x153;over developmentâ&#x20AC;?, waste disposal, planning for coastal â&#x20AC;&#x153;villagesâ&#x20AC;? and, certainly an elephant in the room, how much councillors should be allowed to spend above their $29,000 a year stipend ($92,000 for the mayor). The candidatesâ&#x20AC;&#x2122; buzz word for this election is community. Although not a definable issue, community will be a frequent persuader used by candidates in their search for votes. With just four of the shireâ&#x20AC;&#x2122;s current councillors seeking re-election, the outcome is certain to be a game changer for voting patterns on the council. Although itâ&#x20AC;&#x2122;s guaranteed that seven councillors will not have been re-elected from the current council, some of the â&#x20AC;&#x153;newâ&#x20AC;? faces sitting in the council chamber after the 22 October election may be familiar, with several former councillors deciding it may be their time, again. New alliances will eventually be formed within the council, but for

now and at least a short time after the election, the shireâ&#x20AC;&#x2122;s newly-elected community representatives will be relatively free of old animosities. Like it or hate it, Arthurs Seat is again about to be equipped with a chairlift, or rather a gondola ride called the Eagle. Candidates old and new are singing its praises and probably relieved thatâ&#x20AC;&#x2122;s one battle they will not have to face. Surprisingly, finding a site for a swimming pool at Rosebud may again soak up council time. Rex Griffin, a former mayor and still current councillor of the City of Whittlesea, has nominated for Seawinds ward. Mr Griffin is moving to his former holiday home at Dromana and says he has been a regular in the public gallery at meetings of Mornington Peninsula council for the past five years. He says the council has been â&#x20AC;&#x153;like a cesspool, with councillors arguing and fighting. Enoughâ&#x20AC;&#x2122;s enoughâ&#x20AC;?. Mr Griffin says disposing waste off the peninsula is expensive and notes that the Rye tip â&#x20AC;&#x153;can be kept open for another 18 yearsâ&#x20AC;?. He believes that with his help and experience the shire can get more money from state and federal governments. Regarding a swimming pool at Rosebud, or SPA (Southern Peninsula Aquatic Centre), Mr Griffin says

on a skatepark is an issue, with the shire choosing to renege on a lease with Mt Martha Tennis Club to free up the chosen site. The site has been approved by Heritage Victoria, but it seems the shire overlooked the fact that it had leased the land to the tennis club until 2023. There will be at least two new councillors in the ward after the October poll and plenty of time to force a backflip and moving the skatepark to Ferrero Oval if Heritage Victoria will not approve any other site on the former parade ground. Among those seeking election to Briars ward is Kevin Murphy, secretary of the Mt Martha House management committee, which is opposed to the skatepark on the parade ground. Another Briars ward candidate, Stewart Lockie, said the skatepark proposal was backed by many families but questions were being raised â&#x20AC;&#x153;over why it has taken so longâ&#x20AC;?. One of his aims, if elected, is to hear people saying "the shire are doing a good job". Steering clear of the skatepark, Briars candidate Rebecca Taylor is perhaps the first person to seek public finance for a shire election campaign. â&#x20AC;&#x153;Running for council is something I need to do in order to preserve the only stable frog population left in Mt Eliza. They live in a reservoir earmarked for redevelopment, but I

believe natural habitats in suburban areas add value to communities,â&#x20AC;? she states in her pitch for support on the GoFundMe website. Ms Taylor also mentions the need for better parking and desire for a system â&#x20AC;&#x153;that doesnâ&#x20AC;&#x2122;t see [pre-school] children travelling outside their communities or left with no place at allâ&#x20AC;?. The Briars ward has three councillor vacancies; five candidates are contesting the single-councillor Cerberus ward; eight in the two-councillor Nepean ward; six in Red Hill, which is also represented by one councillor; 10 in three-councillor Seawinds ward; and six candidates are after the single seat in Watson ward. Councillors not seeking re-election are the mayor Graham Pittock, Anne Shaw, David Gibb, Andrew Dixon, Tim Rodgers and Tim Wood; Lynn Bowden resigned in May. Fifteen of the 50 candidates are women. At the start of the previous fouryear council term four of the 11 councillors were women. Candidatesâ&#x20AC;&#x2122; names are listed on the Victorian Electoral Commission website: www.vec.vic.gov.au/MorningtonPeninsulaElection/Candidates/

Bid for private hangar abandoned Stephen Taylor steve@mpnews.com.au A MORNINGTON Peninsula council candidate has withdrawn an application for a planning scheme amendment that would allow planes to be on her property abutting Tyabb airfield. Lisa Dixon and her husband Ken Ingersoll had sought approval to amend planning rules over their property in Stuart Rd, Tyabb. Ms Dixon says she intends to stand for the Watson ward seat left vacant since the resignation in May of former councillor, Lynn Bowden. â&#x20AC;&#x153;It has been a massive journey, not to mention the financial and emotional toll it has placed on us,â&#x20AC;? Ms Dixon said in a letter asking the shireâ&#x20AC;&#x2122;s strategic planning manager Allan Cowley to end the amendment process.

The shireâ&#x20AC;&#x2122;s decision to exhibit the planning scheme amendment came despite a 2014 ruling that any decision on use of the site must wait until completion of the Tyabb Airfield Precinct Plan which is expected to begin this month. Objectors claimed the move would give the Peninsula Aero Club member Ken Ingersoll â&#x20AC;&#x153;backdoor approval for a hangar in spite of the still-valid 2004 reasons for it not being thereâ&#x20AC;? (â&#x20AC;&#x153;Anger over hangar planâ&#x20AC;? The News 19/7/16). Tyabb and District Ratepayersâ&#x20AC;&#x2122; Group sees the use of private land to store aircraft as â&#x20AC;&#x153;an incremental expansion of the airfieldâ&#x20AC;?. Ms Dixonâ&#x20AC;&#x2122;s letter to Mr Cowley thanked him for the â&#x20AC;&#x153;inordinate amount of time and effort you have spent over the past five years in trying to deliver an outcome for the No. 2 shed at 62 Stuart Rdâ&#x20AC;?.

The shire has not been able to provide The News with details of how much it has spent on processing the planning amendment requested by Ms Dixon and Mr Ingersoll. Ms Dixon has also asked council to not order demolition of the shed, saying that they would continue to abide by a Victorian and Civil Administrative Tribunal (VCAT) ruling â&#x20AC;&#x153;of leaving it vacantâ&#x20AC;?. â&#x20AC;&#x153;I wish to make it clear that should I be, or not be, successfully elected to council in the upcoming elections, I will be striving forward to seeing an eventual plan come into fruition for the betterment of the Tyabb community,â&#x20AC;? Ms Dixon stated in her letter to Mr Cowley. She also sent the letter to many people â&#x20AC;&#x153;due to the fact that over time they have been directly dragged into this through a number of channelsâ&#x20AC;?.

Ms Dixon said â&#x20AC;&#x153;personal attacking from the Tyabb ratepayer group - while not acceptable - was born out of the continual frustration of being promised a township plan. We were the â&#x20AC;&#x2DC;catâ&#x20AC;&#x2122; to kick to make themselves heardâ&#x20AC;?. Ratepayersâ&#x20AC;&#x2122; group members Peter and Val Davis said in July that there was still a VCAT order in force prohibiting use of the land for aircraft storage, which would lapse if the amendment application was successful. In 2011 Mr Ingersoll was ordered by Frankston Magistratesâ&#x20AC;&#x2122; Court to pay a $10,000 â&#x20AC;&#x153;bondâ&#x20AC;? for building the shed without a permit in 2010 and for storing 11 aircraft on the site. VCAT also ordered Mr Ingersoll to stop using the shed as a hangar and remove any aircraft. The coupleâ&#x20AC;&#x2122;s Low Density Residential Zone land is on the east side of the

Tyabb airfield, and contains a house and two large sheds. Mr Cowley told the council in April that a VCAT order to remove the shed â&#x20AC;&#x153;was deferred pending broader consideration of issues relating to the Tyabb airfield and is no longer in forceâ&#x20AC;?. â&#x20AC;&#x153;In this case a site specific amendment under Clause 52.03 (Site Specific Exemptions) is proposed, to make the most limited change possible in order to enable the use of the existing building by the owner of the property for private storage.â&#x20AC;? The preparation of a precinct plan for the Airfield was one of the recommendations of the Tyabb township plan adopted by council in May 2012. Shire officers have recommended that the amendment be abandoned. â&#x20AC;&#x153;This will not prevent consideration of a new amendment proposal in future.â&#x20AC;?

with certain TOP-UP hearing aids incorporating the latest generation technology FREE OF CHARGE until the END OF NOVEMBER. The choice is yours, either a discreet deep canal aid or a miniature receiver in canal aid. In both cases the aids will be small and discreet, and programmed to \RXUVSHFLÂżFKHDULQJOHYHOVDQG unique personal needs. www.hiddenhearing.com.au