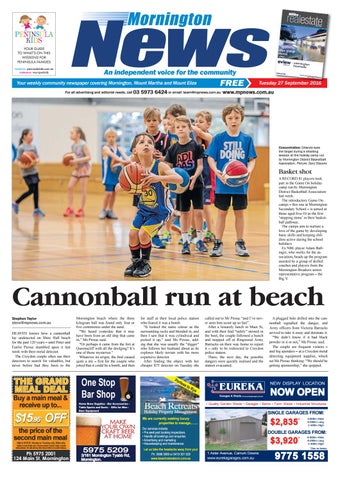 YOUR GUIDE TO WHATâ&#x20AC;&#x2122;S ON THIS WEEKEND FOR PENINSULA FAMILIES FACEBOOK:

Basket shot A RECORD 81 players took part in the Game On holiday camp run by Mornington District Basketball Association last week. The introductory Game On camps â&#x20AC;&#x201C; this one at Mornington Secondary School â&#x20AC;&#x201C; is aimed at those aged five-10 as the first â&#x20AC;&#x2DC;stepping stoneâ&#x20AC;&#x2122; in their basketball pathway. The camps aim to nurture a love of the game by developing basic skills and keeping children active during the school holidays. Ex NBL player Adam Ballinger, who works for the association, heads up the program assisted by a group of skilled coaches and players from the Mornington Breakers senior representative program â&#x20AC;&#x201C; the Big V.

Cannonball run at beach Stephen Taylor steve@mpnews.com.au HEAVEN knows how a cannonball lay undetected on Shire Hall beach for the past 120 years â&#x20AC;&#x201C; until Peter and Fairlie Pirouc stumbled upon it last week with their metal detector. The Croydon couple often use their detectors to search for valuables, but never before had they been to the

Mornington beach where the three kilogram ball was found only four or five centimetres under the sand. â&#x20AC;&#x153;We heard yesterday that it may have been from an old ship that came in,â&#x20AC;? Ms Pirouc said. â&#x20AC;&#x153;Or perhaps it came from the fort at Queenscliff with all the dredging? Itâ&#x20AC;&#x2122;s one of those mysteries.â&#x20AC;? Whatever its origin, the find caused quite a stir â&#x20AC;&#x201C; first for the couple who joked that it could be a bomb, and then

for staff at their local police station who feared it was a bomb. â&#x20AC;&#x153;It looked the same colour as the surrounding rocks and blended in, and then I saw that it was cylindrical and picked it up,â&#x20AC;? said Ms Pirouc, adding that she was usually the â&#x20AC;&#x153;diggerâ&#x20AC;? who follows her husband about as he explores likely terrain with his more expensive detector. After finding the object with her cheaper $75 detector on Tuesday she

called out to Mr Pirouc â&#x20AC;&#x153;and Iâ&#x20AC;&#x2122;ve never seen him scoot up so fastâ&#x20AC;?. After a leisurely lunch in Main St, and with their find â&#x20AC;&#x153;safelyâ&#x20AC;? stowed in the boot, the couple followed a hunch and stopped off at Ringwood Army Barracks on their way home to report it â&#x20AC;&#x201C; only to be redirected to Croydon police station. There, the next day, the possible dangers were quickly realised and the station evacuated.

We are currently seeking luxury properties to manage.........