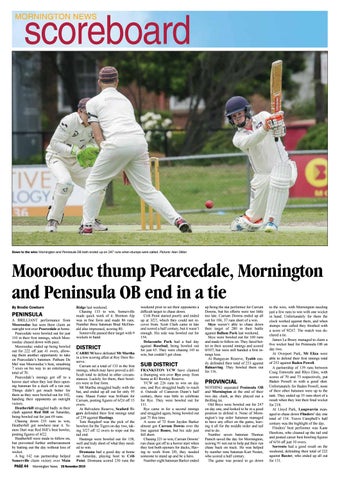 Down to the wire: Mornington and Peninsula OB both ended up on 247 runs when stumps were called. Picture: Alan Dillon

A BRILLIANT performance from Moorooduc has seen them claim an outright win over Pearcedale at home. Pearcedale were bowled out for just 110 in their first innings, which Moorooduc chased down with pace. Moorooduc ended up being bowled out for 222 off just 41 overs, allowing them another opportunity to take on Pearcedale’s batsmen. Pathum De Mel was Moorooduc’s best, smashing 7 sixes on his way to an entertaining total of 70. Pearcedale’s innings got off to a horror start when they lost their opening batsman for a duck off a run out. Things didn’t get much better for them as they were bowled out for 102, handing their opponents an outright victory. Heatherhill struggled badly in their clash against Red Hill on Saturday, being bowled out for just 69 runs. Chasing down 235 runs to win, Heatherhill got nowhere near it. Simon Dart was Red Hill’s best bowler, posting figures of 4/22. Heatherhill were made to follow on, but prevented further embarrassment by batting out the day without loss of wicket. A big 142 run partnership helped Somerville claim victory over Main

CARRUM have defeated Mt Martha in a low scoring affair at Roy Dore Reserve. Carrum set a total of 133 in the first innings, which may have proved a difficult total to defend in other circumstances. Luckily for them, their bowlers were in fine form. Mt Martha struggled badly with the bat, and ended up all out for only 95 runs. Shaun Foster was brilliant for Carrum, posting figures of 6/24 off 15 overs. At Belvedere Reserve, Seaford Tigers defended their first innings total of 239 against Hastings. Tom Burgdorf was the pick of the bowlers for the Tigers on day two, taking 5/27 off 12 overs to wipe out the tail end. Hastings were bowled out for 158, well and truly short of what they needed to win. Dromana had a good day at home on Saturday, playing host to Crib Point. Dromana scored 230 runs the

weekend prior to set their opponents a difficult target to chase down. Crib Point started poorly and ended up at 3/27, which they could not recover from. Scott Clark came in late and scored a half century, but it wasn’t enough. His side was bowled out for 154. Delacombe Park had a bad day against Rosebud, being bowled out for just 65. They were chasing 145 to win, but couldn’t get close.

FRANKSTON YCW have claimed a thumping win over Rye away from home at RJ Rowley Reserve. YCW set 226 runs to win on day one, and Rye struggled badly to reach it. Outside of Cameron Dunn’s half century, there was little to celebrate for Rye. They were bowled out for 111. Rye came in for a second innings and struggled again, being bowled out just 75 this time. A score of 72 from Jayden Barker almost got Carrum Downs over the line against Boneo, but his side just fell short. Chasing 221 to win, Carrum Downs’ run chase got off to a horror start when they lost both openers for ducks, Having to work from 2/0, they needed someone to stand up and be a hero. Number eight batsman Barker ended

up being the star performer for Carrum Downs, but his efforts were too little too late. Carrum Downs ended up all out for 184, 37 runs short of a win. Skye weren’t able to chase down their target of 280 in their battle against Ballam Park last weekend. Skye were bowled out for 160 runs and made to follow on. They fared better in their second innings and scored 0/107, but were still handed a first innings loss. At Bunguyan Reserve, Tyabb easily defended their total of 253 against Balnarring. They bowled them out for 116.

NOTHING separated Peninsula OB and Mornington at the end of their two day clash, as they played out a thrilling tie. Old Boys were bowled out for 247 on day one, and looked to be in a good position to defend it. None of Mornington’s top order batsmen managed to have any effect on the game, leaving it all for the middle order and tail end to do. Number seven batsman Thomas Panich saved the day for Mornington, scoring 91 not out to help put their run chase back on track. He was helped by number nine batsman Kurt Nestor, who scored a half century. The game was poised to go down

to the wire, with Mornington needing just a few runs to win with one wicket in hand. Unfortunately for them the clock worked against them, and when stumps was called they finished with a score of 9/247. The match was declared a tie. James La Brooy managed to claim a five wicket haul for Peninsula OB on day two. At Overport Park, Mt Eliza were able to defend their first innings total of 253 against Baden Powell. A partnership of 139 runs between Craig Entwistle and Rhys Elmi, with scores of 70 and 73 respectively, put Baden Powell in with a good shot. Unfortunately for Baden Powell, none of their other batsmen were up to the task. They ended up 35 runs short of a result when they lost their final wicket for 218. At Lloyd Park, Langwarrin managed to chase down Flinders’ day one total of 134. Travis Campbell’s half century was the highlight of the day. Flinders’ best performer was Kane Hawkins, who cleaned up the tail end and posted career best bowling figures of 6/16 off just 10 overs. Sorrento had a good result on the weekend, defending their total of 222 against Baxter, who ended up all out for 151.