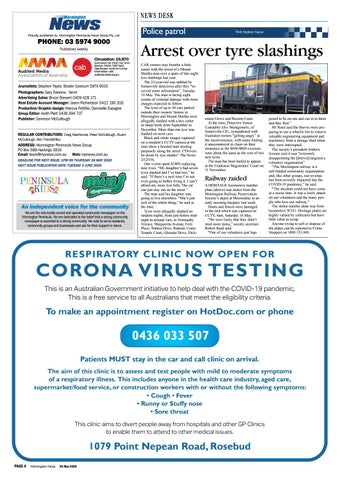 Arrest over tyre slashings CAR owners may breathe a little easier with the arrest of a Mount Martha man over a spate of late night tyre slashings last year. The 25-year-old was nabbed by Somerville detectives after they “received some information”, Tuesday 19 May. The man is facing eight counts of criminal damage with more charges expected to follow. The tyres of up to 40 cars parked outside their owners’ homes in Mornington and Mount Martha were allegedly slashed with a box cutter or sharp knife from September to December. More than one tyre was slashed on most cars. Black and white images captured on a resident’s CCTV camera at the time show a hooded man striding purposely along the street. (“Drivers let down by tyre slasher” The News 2/12/19). One victim spent $1800 replacing nine tyres. “My daughter’s had seven tyres slashed and I’ve had two,” he said. “If there’s a next time I’m not even going to bother fixing it. I can’t afford any more tyre bills. The car can just stay out on the street.” The man said his daughter was going to live elsewhere. “She’s just sick of the whole thing,” he said at the time. Tyres were allegedly slashed on random nights, from just before midnight to around 1am, in Normanby Terrace, Marguerita Avenue, Fern Place, Walara Drive, Ramsay Court, Temple Court, Glenisla Drive, Dick-

enson Grove and Buxton Court. At the time, Detective Senior Constable Alex Montgomery, of Somerville CIU, sympathised with frustrated owners “getting angry” at the inconvenience, with many finding it uneconomical to claim on their insurance as the $600-$800 excesses were about the same as the cost of two new tyres. The man has been bailed to appear at the Frankston Magistrates’ Court on 11 November.

Railway raided A HERITAGE locomotive number plate (above) was stolen from the Mornington Railway Preservation Society’s depot at Moorooduc in an early morning burglary last week. Doors and fences were damaged in the raid which was captured on CCTV, 4am, Saturday 16 May. “We were lucky that they didn’t steal more items,” society secretary Robert Reed said. “One of our volunteers just hap-

pened to be on site and ran in to them and they fled.” Mr Reed said the thieves were preparing to use a wheelie bin to remove valuable engineering equipment and machinery from a storage shed when they were interrupted. The society’s president Andrew Swaine said it was “extremely disappointing the [thieves] targeted a volunteer organisation”. “The Mornington railway is a self-funded community organisation and, like other groups, our revenue has been severely impacted due the COVID-19 pandemic,” he said. “The incident could not have come at a worse time. It was a lowly attack on our volunteers and the many people who love our railway.” The stolen number plate was from locomotive W241. Heritage plates are highly valued by collectors but have little value as scrap. Anyone trying to sell or dispose of the plates can be reported to Crime Stoppers on 1800 333 000.

0436 033 507 Patients MUST stay in the car and call clinic on arrival. The aim of this clinic is to assess and test people with mild to moderate symptoms of a respiratory illness. This includes anyone in the health care industry, aged care, supermarket/food service, or construction workers with or without the following symptoms: • Cough • Fever • Runny or Stuffy nose • Sore throat This clinic aims to divert people away from hospitals and other GP Clinics to enable them to attend to other medical issues.