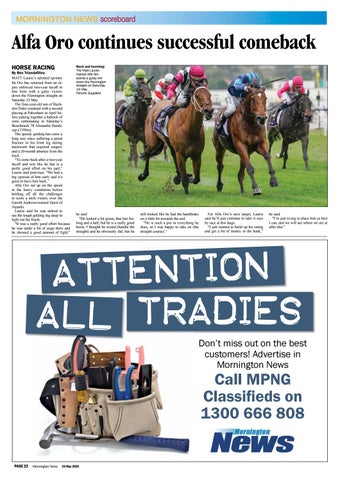 By Ben Triandafillou MATT Laurie’s talented sprinter lfa Oro has returned from an injury enforced two-year layoff in fine form with a gutsy victory down the Flemington straight on Saturday 23 May. The four-year-old son of Bachelor Duke resumed with a second placing at Pakenham in April before putting together a hattrick of wins culminating in Saturday’s Benchmark 78 Almandin Handicap (1100m). The speedy gelding has come a long way since suffering a spiral fracture in his front leg during trackwork that required surgery and a 20-month absence from the track. “To come back after a two-year layoff and win like he has is a pretty good effort on his part,” Laurie said post-race. “We had a big opinion of him early and it’s good to have him back.” Alfa Oro sat up on the speed in the heavy conditions before holding off all the challenges to score a neck victory over the Gareth Andrews-trained Spirit of Aquada. Laurie said he was stoked to see the tough gelding dig deep to fight out the finish. “It was a really good effort because he was under a bit of siege there and he showed a good amount of fight,”

Back and booming: The Matt Laurietrained Alfa Oro scores a gutsy win down the Flemington straight on Saturday 23 May. Picture: Supplied

he said. “He looked a bit green, that last furlong and a half, but he is a really good horse. I thought he would (handle the straight) and he obviously did, but he

still looked like he had the handbrake on a little bit towards the end. “He is such a pro in everything he does, so I was happy to take on (the straight course).”

For Alfa Oro’s next target, Laurie said he’ll just continue to take it race by race at this stage. “I just wanted to build up his rating and get a bit of money in the bank,”

he said. “I’m just trying to place him as best I can, and we will see where we are at after this.”