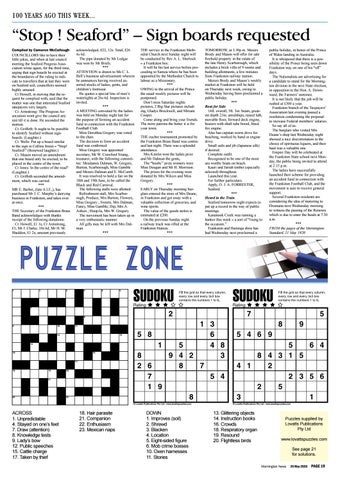 “Stop ! Seaford” – Sign boards requested Compiled by Cameron McCullough COUNCILLORS like to have their little jokes, and when at last council meeting the Seaford Progress Association wrote again, for the third time, urging that sign boards be erected at the boundaries of the riding to indicate to travellers that at last they were on Seaford soil, councillors seemed highly amused. Cr Howell, in moving that the request be complied with, said that the matter was one that interested Seaford ratepayers very largely. Cr. Armstrong: The Progress Association wont give the council any rest till it is done. He seconded the motion. Cr. Griffeth: It ought to be possible to identify Seaford without signboards. (Laughter.) Cr. Wells: Put up a board similar to the sign in Collins Street – “Stop! Seaford!” (Renewed laughter.) Cr. Mason moved an amendment that one board only be erected, to be placed in the centre of the town. Cr Jones: In the centre of the road? (Laughter.) Cr. Griffeth seconded the amendment, which was carried. *** MR E. Barber, (late A.I.F.,), has purchased Mr J. C. Murphy’s dairying business in Frankston, and takes over at once. *** THE Secretary of the Frankston Brass Band acknowledges with thanks receipt of the following donations: Cr. Howell, £1 1s; Cr Armstrong, £1; Mr J. Clarke, 10s 6d; Mr H. M. Sheddon, £1 2s; amount previously

acknowledged, £22, 12s. Total, £26 4s 6d. The pipe donated by Mr Ledgar was won by Mr Briely. *** ATTENTION is drawn to Ms C. L. Bell’s business advertisement wherein he announces having received assorted stocks of ladies, gents, and children’s footwear. He quotes a special line of men’s watertights at 26s 6d. Inspection is invited. *** A MEETING convened by the ladies was held on Monday night last for the purpose of forming an accident fund in connection with the Frankston Football Club. Miss Dorothea Gregory was voted to the chair. The decision to form an accident fund was confirmed. Miss Gregory was appointed secretary, Mr W. Crawford Young, treasurer, with the following committee: Mesdames Dalman, W. Gregory, Burton, Scarborough, Miss Gamble and Messrs Dalman and E. McComb. It was resolved to hold a fair on the 18th and 19th June, to be called the Black and Red Carnival. The following stalls were allotted: Refreshment stall, Mrs Scarborough; Produce, Mrs Burton; Flowers, Miss Gregory ; Sweets, Mrs Dalman; Fancy, Miss Gamble; Dip, Mrs A. Aitken ; Hoop-la, Mrs W. Gregory. The movement has been taken up in a very enthusiastic manner. All gifts may be left with Mrs Dalman. ***

THE service in the Frankston Methodist Church next Sunday night will be conducted by Rev A. L. Sherlock – a Frankston boy. It will be his last service before proceeding to Samoa where he has been appointed by the Methodist Church to labour as a Missionary. *** OWING to the arrival of the Prince the usual weekly pictures will be postponed. Don’t miss Saturday nights pictures, 2 Big Star pictures including, Gladys Brockwell, and Miriam Cooper. Come along and bring your friends. The more patrons the better it is for your town. *** THE euchre tournament promoted by the Frankston Brass Band was continued last night. There was a splendid attendance. Mrs Kimlin won the ladies prize and Mr Dalman the gents, The “booby” prize winners were Miss Dougan and Mr H. Morrison. The prizes for the evening were donated by Mrs Wilcox and Miss Gregory. *** EARLY on Thursday morning burglars entered the store of Mrs Deane, in Frankston and got away with a valuable collection of groceries, and wine spirits. The value of the goods stolen is estimated at £200. On the previous Sunday night a railway truck was rifled at the Frankston Station. ***

TOMORROW, at 3.30p.m. Messrs Brody and Mason will offer for sale freehold property in the estate of the late Henry Scarborough, which includes a brick villa of 9 rooms and building allotments, a few minutes from Frankston railway station. Messrs Brody and Mason’s weekly market at Frankston will be held on Thursday next week, owing to Wednesday having been proclaimed a public holiday. *** Boat for Sale 14ft. overall, 5ft. 3in. beam, greatest depth 23in. amidships, raised lath, movable floor, forward deck engine, bearers with shaft tube bored, fitted fox engine. Also has capstan worm drive for beaching, worked by hand or engine drive. Small sails and jib (Japanese silk) if desired. Complete outfit. Recognised to be one of the most sea worthy boats on beach. Kauri and Jarrah timber (specially selected) throughout. Launched this year. For further particulars. Apply, O. J. A. FORRESTER, Seaford *** Heard in the Train Seaford tomorrow night expects to put up a record in the way of public meetings. Kananook Creek was running a banker this week – a sort of “rising to the occasion.” Frankston and Hastings shire has had Wednesday next proclaimed a

public holiday, in honor of the Prince of Wales landing in Australia. It is whispered that there is a possibility of the Prince being seen down Frankston way on one of his “off” days. The Nationalists are advertising for a candidate to stand for the Mornington division in the next State election, in opposition to the Hon. A. Downward, the Farmers’ nominee. It is not likely that the job will be rushed at £300 a year. Frankston branch of the Taxpayers’ Association last evening passed a resolution condemning the proposal to increase Federal members’ salaries. So say all of us. The burglars who visited Mrs Deane’s shop last Wednesday night showed a nice discrimination in the choice of spirituous liquors, and their haul was a valuable one. Empire Day will be celebrated at the Frankston State school next Monday, the public being invited to attend at 2.15 p.m. The ladies have successfully launched their scheme for providing an accident fund in connection with the Frankston Football Club, and the movement is sure to receive general support. Several Frankston residents are considering the idea of motoring to Dromana next Wednesday morning to witness the passing of the Renown which is due to enter the heads at 7.30 a.m. *** FROM the pages of the Mornington Standard, 21 May 1920