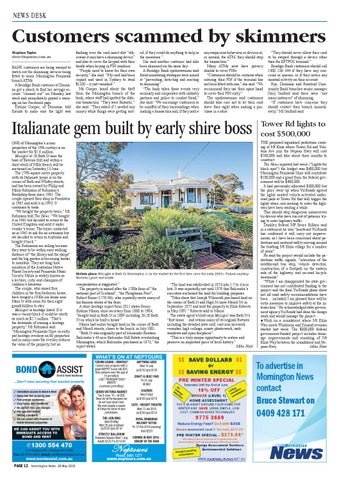 Customers scammed by skimmers Stephen Taylor steve@mpnews.com.au BANK customers are being warned to watch out for skimming devices being fitted to some Mornington Peninsula branch ATMs. A Bendigo Bank customer at Dromana got a shock to find her savings account “cleaned out” on Monday last week and immediately posted a warning on her Facebook page. Katrina Cooper, of Dromana, told friends to make sure the light was

flashing over the card insert slot “otherwise it may have a skimming device” and also to cover the keypad with their hands when keying in PIN numbers. “People need to know for their own security,” she said. “My card had been copied and used in Sydney to steal $1100 – it just vanished.” Ms Cooper heard about the theft from the Mornington branch of the bank, where staff had spotted the dubious transaction. “They were fantastic,” she said. “They asked if I needed any money while things were getting sort-

ed; if they could do anything to help in the meantime.” She said another customer had also been skimmed on the same day. A Bendigo Bank spokeswoman said fraud monitoring strategies were aimed at “preventing, detecting and reacting to skimming”. “The bank takes these events very seriously and cooperates with industry partners and police to combat fraud,” she said. “We encourage customers to be mindful of their surroundings when making a transaction and, if they notice

any suspicious behaviour or devices at, or around, the ATM, they should stop the transaction.” Many ATMs now have privacy shields to cover PINs. “Customers should be cautious when entering their PIN if the terminal has not been fitted with one,” she said. “We recommend they use their spare hand to cover their PIN entry.” The spokeswoman said customers should take care not to let their card leave their sight when making a purchase in a store.

“They should never allow their card to be swiped through a device other than the EFTPOS terminal.” Bendigo Bank customers should call 1300 236 344 if they have any concerns or queries, or if they notice any unusual activity on their account. Rye, Dromana and Rosebud Community Bank branches senior manager Gary Sanford said there were “not many instances” of skimming. “If customers have concerns they should contact their branch immediately,” Mr Sanford said.

ONE of Mornington’s iconic properties of the 19th century is on the market for $1.6 million. Mossgiel at 28 Bath St near the base of Beleura Hill and within a short stroll of Mills Beach will be auctioned on Saturday 13 June. The 2790-square metre property with its Italianate house is on the corner of Bath and Whitby streets, and has been owned by Philip and Moira Robinson of Robinson’s Bookshop fame since 1961. The couple opened their shop in Frankston in 1965 and sold it in 1993. It continues to trade. “We bought the property twice,” Mr Robinson told The News. “We bought it in 1961 but decided to return to the United Kingdom and sold it under vendor’s terms. The buyer contacted us in 1965 to ask for an extension but we decided to return to Australia and bought it back.” The Robinsons are selling because they want to be within easy walking distance of “the library and the shops” and the big garden is becoming harder to maintain. They are long-time members of the Australian Native Plants Society and Peninsula Music Society. Moira is widely known as a lecturer, critic and champion of children’s literature. The couple, who raised four children in the four-bedroom house, have bought a 1930s-era house near Main St with room for their eight grandchildren to stay. Mossgiel is heritage listed. If it was a vacant block it could be worth as much as $2.5 million. “That’s the downside of owning a heritage property,” Mr Robinson said. “Mornington Peninsula Shire recently put heritage overlays on 60 properties and in many cases the overlay reduces the value of the property, but no

THE proposed signalised pedestrian crossing at Mt Eliza where Tower Rd and Volitans Ave join the Nepean Hwy will cost $500,000 and take about three months to construct. The News reported last week (“Lights for black spot”) the budget was $400,000 but Mornington Peninsula Shire will contribute $100,000 and a grant from the federal government will be $400,000. It had previously allocated $300,000 but the price went up when VicRoads agreed the lights needed vehicle-activated underroad pads at Tower Rd that will trigger the lights when cars seeking to enter the highway have been waiting a while. This should stop dangerous manoeuvres by drivers who have run out of patience trying to enter highway traffic. Dunkley federal MP Bruce Billson said in a statement he was “heartened VicRoads has confirmed it will carry out improvements, as I have been concerned about pedestrian and motorist safety moving around the bustling Mt Eliza village for a number of years”. He said the project would include the pedestrian traffic signals, “relocation of the southbound bus stop, vehicle detectors, construction of a footpath on the eastern side of the highway, and on-road bicycle treatments”. “While I am disappointed the state government has not contributed funding to the project and the final VicRoads plans show not all road safety recommendations have been ... included, I am pleased there will be extra measures to improve safety at the intersection.” He acknowledged state government agency VicRoads had done the design work and would manage the project.  Work on a roundabout where Mt Eliza Way meets Wimborne and Kenaud avenues started last week. The $800,000 federal government-funded project includes drainage improvements and remaking of Mt Eliza Way between the roundabout and Nepean Hwy. Mike Hast

Historic place: Mossgiel in Bath St, Mornington, is on the market for the first time since the early 1960s. Picture courtesy Nicholas Lynch real estate

compensation is suggested.” The property is named after the 1780s farm of “the national poet of Scotland”, “the Ploughman Poet”, Robert Burns (1759-96), who reputedly wrote many of his famous works at the farm. A shire heritage report from 2012 states Henry Erskine Moors, shire secretary from 1888 to 1904, “bought land in Bath St in 1889 including 26-28 Bath St on which he built a house”. Moors had earlier bought land on the corner of Bath and Morell streets, closer to the beach, in July 1881. “Bath St was originally part of Alexander Beatson Balcombe’s 43-acre Balcombe Hill Estate overlooking Mornington, which Balcombe purchased in 1873,” the report stated.

“The land was subdivided in 1874 into 1.5 to 4 acre lots. It was reportedly not until 1879 that Balcombe’s executors auctioned the land for building purposes. “Titles show that Joseph Wilmouth purchased land on the corner of Bath St and High St (now Morell St) in September 1875 and sold the property to Eliza Roberts in May 1891.” Roberts sold to Moors. The estate agent’s blurb says Mossgiel was Bath St’s “first home ... and retains many of its original features including the detailed slate roof, cast-iron lacework verandas, high ceilings, ornate plasterwork, sash windows and open fireplaces”. “This is a truly unique opportunity to restore and preserve an important piece of local history.” Mike Hast