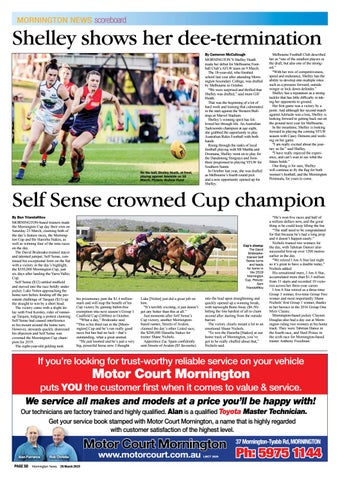 On the ball: Shelley Heath, at front, playing against Adelaide on 16 March. Picture: Andrew Hurst

By Cameron McCullough MORNINGTON’S Shelley Heath made her debut for Melbourne Football Club’s AFLW team on 9 March. The 18-year-old, who finished school last year after attending Mornington Secondary College, was drafted by Melbourne in October. “We were surprised and thrilled that Shelley was drafted,” said mum Gill Heath. That was the beginning of a lot of hard work and training that culminated in the start against the Western Bulldogs at Marvel Stadium. Shelley’s winning spirit has followed her through life. An Australian Taekwondo champion at age eight, she grabbed the opportunity to play Australian Rules Football with both hands. Rising through the ranks of local football playing with Mt Martha and Dromana, Shelley went on to play for the Dandenong Stingrays and from there progressed to playing VFLW for Southern Saints. In October last year, she was drafted as Melbourne’s fourth round pick and a new opportunity opened up for Shelley.

Melbourne Football Club described her as “one of the smallest players in the draft, but also one of the strongest.” “With her mix of competitiveness, speed and endurance, Shelley has the ability to develop into multiple roles such as a pressure forward, outside winger or lock down defender.” Shelley has a reputation as a strong tackler that has little difficulty in taking her opponents to ground. Her first game was a victory by a point. And although her second match against Adelaide was a loss, Shelley is looking forward to getting back out on the ground next year for Melbourne. In the meantime, Shelley is looking forward to playing the coming VFLW season with Casey Demons and working on her game. “I am really excited about the journey so far.” said Shelley. “I have really enjoyed the experience, and can’t wait to see what the future holds.” One thing is for sure, Shelley will continue to fly the flag for both women’s football, and the Mornington Peninsula, for years to come.

Self Sense crowned Cup champion By Ben Triandafillou MORNINGTON-based trainers made the Mornington Cup day their own on Saturday 23 March, claiming both of the day’s feature races, the Mornington Cup and the Hareeba Stakes, as well as winning four of the nine races on the day. The David Brideoake-trained stayer and talented jumper, Self Sense, continued his exceptional form on the flat with a victory in the day’s highlight, the $350,000 Mornington Cup, just six days after landing the Yarra Valley Cup. Self Sense ($12) settled midfield and moved into the race boldly under jockey Luke Nolen approaching the home turn before fending off the persistent challenge of Tarquin ($13) up the straight to win by a short head. The victory came with a slight delay with Fred Kersley, rider of runnerup Tarquin, lodging a protest claiming Self Sense had caused interference to his mount around the home turn. However, stewards quickly dismissed his objection and Self Sense was crowned the Mornington Cup champion for 2019. The eight-year-old gelding took

Cup’s champ: The David Brideoaketrained Self Sense turns and leads for home in the 2019 Mornington Cup. Picture: Sam Triandafillou

his prizemoney past the $1.4 million mark and will reap the benefit of his Cup victory by gaining ballot-free exemption into next season’s Group 1 Caulfield Cup (2400m) in October. “What a day,” Brideoake said. “This is his third run in the [Mornington] Cup and he’s run really good races but has had no luck - that’s outstanding, what a great animal. “He just loomed and he’s just a very big, powerful horse now. I thought

Luke [Nolen] just did a great job on him. “It’s terribly exciting, it just doesn’t get any better than this at all.” Just moments after Self Sense’s Cup victory, another Morningtonbased runner, Streets of Avalon, claimed the day’s other Listed race, the $200,000 Hareeba Stakes for trainer Shane Nichols. Apprentice Zac Spain confidently sent Streets of Avalon ($5 favourite)

into the lead upon straightening and quickly opened up a winning break, with topweight Bons Away ($6.50) hitting the line hardest of all to claim second after starting from the outside barrier. The victory clearly meant a lot to an emotional Shane Nichols. “To win the Hareeba [Stakes] at our home track of Mornington, you’ve got to be really chuffed about that,” Nichols said.

“He’s won five races and half of a million dollars now, and the great thing is he could keep lifting the bar. “The staff need to be congratulated for that because he’s had a long prep and it doesn’t happen easily.” Nichols trained two winners for the day, with Tahitian Dancer also successful first-up over 1200 metres earlier in the day. “We retired I Am A Star last night so it’s great to have a double today,” Nichols added. His sensational mare, I Am A Star, accumulated more than $1.5 million from 31 starts and recorded 10 victories across her three-year career. I Am A Star retired as a three-time Group 3 winner, five-time Group Two winner and most importantly Shane Nichols’ first Group 1 winner, thanks to her heroics in the 2016 Group One Myer Classic. Mornington-based jockey Clayton Douglas also had a day out at Mornington riding two winners at his home track. They were Tahitian Dance in the fourth race, and Steel Prince in the sixth race for Mornington-based trainer Anthony Freedman.

Our technicians are factory trained and highly qualified. Alan is a qualified Toyota Master Technician. Get your se service book stamped with Motor Court Mornington, a name that is highly regarded with customer satisfaction of the highest level.