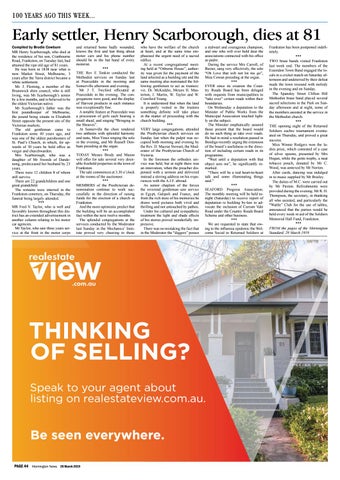 Early settler, Henry Scarborough, dies at 81 Compiled by Brodie Cowburn MR Henry Scarborough, who died at the residence of his son, Cranbourne Road, Frankston, on Tuesday last, had attained the ripe old age of 81 years. He was born in 1838 near what is now Market Street, Melbourne, 3 years after the Yarra district became a white settlement. Mr. J. Fleming, a member of the Brunswick shire council, who is still living, was Mr Scarborough’s senior by a few months, and is believed to be the oldest Victorian native. Mr Scarborough’s father was the first poundkeeper of Melbourne, the pound being situate in Elizabeth Street opposite the present site of the Victorian markets. The old gentleman came to Frankston some 40 years ago, and was one of the oldest parishioners of St. Paul’s Church, in which, for upwards of 30 years he hold office as verger and churchwarden. Mrs Scarborough, who was a daughter of Mr Swords of Dandenong, predeceased her husband by 23 years. There were 12 children 8 of whom still survive. There are 22 grandchildren and one great grandchild. The remains were interred in the Frankston cemetery, on Thursday, the funeral being largely attended. *** MR Fred V. Taylor, who is well and favorably known throughout this district has an extended advertisement in another column relating to his motor car agencies. Mr Taylor, who saw three years service at the front in the motor corps

and returned home badly wounded, knows the first and last thing about motor cars and his phone number should be in the hat band of every motorist. *** THE Rev E Tonkin conducted the Methodist services on Sunday last at Pearcedale in the morning and Somerville afternoon and evening. Mr J T. Twyford officiated at Pearcedale in the evening. The congregations were good, and the display of Harvest products in each instance was exceptionally fine. A notable feature at Pearcedale was a procession of girls each bearing a small sheaf, and singing “Bringing in the Sheaves”. At Somerville the choir rendered two anthems with splendid harmony and taste, Miss Vines singing the solo in the evening, and Mr Russell Denham presiding at the organ. *** TODAY Messrs Brody and Mason will offer for sale several very desirable freehold properties in the town of Frankston. The sale commences at 3.30 o’clock at the rooms of the auctioneer. *** MEMBERS of the Presbyterian denomination continue to work successfully in the direction of raising funds for the erection of a church in Frankston. And the more optimistic predict that the building will be an accomplished fact within the next twelve months. The splendid congregations at the services conducted by the Moderator last Sunday in the Mechanics’ Institute proved very cheering to those

who have the welfare of the church at heart, and at the same time emphasised the urgent need of a sacred edifice. At a recent congregational meeting held at “Osborne House”, authority was given for the payment of the land selected as a building site and the same meeting also nominated the following gentlemen to act as trustees: viz. Dr. McKeddie, Messrs H. Masterton, J. Martin, W. Taylor and W. Crawford Young. It is understood that when the land is properly vested in the trustees something definite will take place in the matter of proceeding with the church building. *** VERY large congregations. attended the Presbyterian church services on Sunday last when the pulpit was occupied both morning and evening by the Rev. D. Macrae Stewart, the Moderator of the Presbyterian Church of Victoria. In the forenoon the orthodox service was held, but at night there was an innovation, when the preacher dispensed with a sermon and delivered instead a stirring address on his experiences with the A.I.F. abroad. As senior chaplain of the forces the reverend gentleman saw service in Egypt, Galipoli and France, and from the rich store of his memories he draws word pictures both vivid and thrilling and not untouched by pathos. Under his cultured and sympathetic treatment the light and shade effects of his stories proved wonderfully impressive. There was no mistaking the fact that in the Moderator the “diggers” posses

a stalwart and courageous champion, and one who will ever hold dear the associations connected with his office as padre. During the service Mrs Carroll, of Baxter, sang very effectively, the solo “Oh Love that wilt not lot me go”, Miss Cowan presiding at the organ. *** EVER since its creation the Country Roads Board has been deluged with requests from municipalities to “take over” certain roads within their boundaries. On Wednesday a deputation to the Minister of Public Works from the Municipal Association touched lightly on the subject. The Minister emphatically assured those present that the board would do no such thing as take over roads. He had in mind a resolution passed in Bendigo recently urging the extension of the board’s usefulness in the direction of including certain roads in its programme. “Wait until a deputation with that object sees me”, he significantly remarked. “There will be a real heart-to-heart talk and some illuminating things said.” *** SEAFORD Progress Association. The monthly meeting will be held tonight (Saturday) to receive report of deputation re building by-law to advocate the inclusion of Carrum Vale Road under the Country Roads Board Scheme and other business. *** We are requested to state that owing to the influenza epidemic the Welcome Social to Returned Soldiers at

Frankston has been postponed indefinitely. *** TWO brass bands visited Frankston last week end. The members of the Essendon Town Band engaged the locals in a cricket match on Saturday afternoon and undeterred by their defeat made the town resound with melody in the evening and on Sunday. The Spansley Street Clifton Hill Methodist brass band played several sacred selections in the Park on Sunday afternoon and at night, some of the members assisted at the service in the Methodist church. *** THE opening night of the Returned Soldiers euchre tournament eventuated on Thursday, and proved a great success. Miss Winnie Rodgers won the ladies prize, which consisted of a case of silver spoons, presented by Mrs Hogan, while the gents trophy, a neat tobacco pouch, donated by Mr C. Wood, was annexed by Mr Norton. After cards, dancing was indulged in to music supplied by Mr Brieley. The duties of M.C. were carried out by Mr Paxton. Refreshments were provided during the evening. Mr R. H. Thompson, the secretary, in thanking all who assisted, and particularly the “Wattle” Club for the use of tables, announced that the parties would be held every week in aid of the Soldiers Memorial Hall Fund, Frankston. *** FROM the pages of the Mornington Standard, 29 March 1919