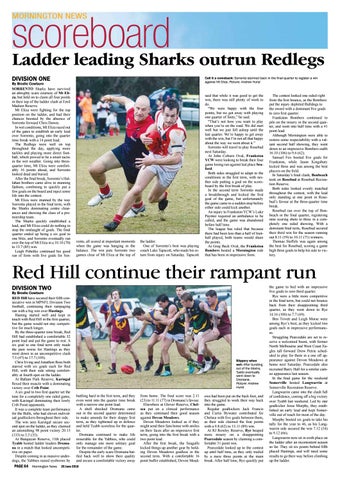 By Brodie Cowburn SORRENTO Sharks have survived an almighty scare courtesy of Mt Eliza, but held on to claim all four points in their top of the ladder clash at Emil Madsen Reserve. Mt Eliza were fighting for the top position on the ladder, and had their chances boosted by the absence of Sorrento forward Chris Dawes. In wet conditions, Mt Eliza raced out of the gates to establish an early lead over Sorrento, going into the quarter time break with a 14 point lead. The Redlegs were well on top throughout the day, applying more tackles and playing more direct football, which proved to be a smart tactic in the wet weather. Going into threequarter time, Mt Eliza were comfortably 16 points ahead, and Sorrento looked dead and buried. After the final break, Sorrento’s Hallahan brothers came alive in stunning fashion, combining to quickly put a few goals on the board and inject some life into the contest. Mt Eliza were stunned by the way Sorrento played in the final term, with the Sharks dominating centre clearances and showing the class of a premiership team. The Sharks quickly established a lead, and Mt Eliza could do nothing to stop the onslaught of goals. The final quarter ended up being a six goal to one blitz, and Sorrento eventually ran over the top of Mt Eliza in a 10.10 (70) to 13.7 (85) win. Leigh Poholke continued his good run of form with five goals for Sor-

Call it a comeback: Sorrento stormed back in the final quarter to register a win against Mt Eliza. Picture: Andrew Hurst

rento, all scored at important moments when the game was hanging in the balance. The win puts Sorrento two games clear of Mt Eliza at the top of

the ladder. One of Sorrento’s best was playing coach Luke Tapscott, who made his return from injury on Saturday. Tapscott

said that while it was good to get the win, there was still plenty of work to do. “We were happy with the four points, but we got away with playing one quarter of footy,” he said. “That’s not how you want to play when you’re on the road. We did start well but we just fell asleep until the last quarter. We’re happy to get away with the win, but I’m not all that happy about the way we went about it.” Sorrento will travel to play Rosebud next Saturday. At John Coburn Oval, Frankston YCW were looking to break their four game losing run against last place Seaford. Both sides struggled to adapt to the conditions in the first term, with neither side putting a goal on the scoreboard by the first break of play. In the second term Sorrento made a breakthrough and kicked the first goal of the game, but unfortunately the game came to a sudden stop before either side could kick another. An injury to Frankston YCW’s Luke Paynter required an ambulance to be called, and the game was abandoned before half time. The league has ruled that because there had been less than a half of football played, both teams would share the points. At Greg Beck Oval, the Frankston Bombers hosted a Mornington side that has been in impressive form.

The contest looked one sided right from the first bounce, as the Bombers put the injury depleted Bulldogs to the sword with a dominant five goals to zero first quarter. Frankston Bombers continued to pile on the misery in the second quarter, and went into half time with a 41 point lead. Although Mornington were able to restore some respectability with a valiant second half showing, they went down to an impressive Bombers outfit 16.10 (106) to 9.6 (62). Samuel Fox booted five goals for Frankston, while Jason Kingsbury kicked three and was among the best players on the field. In Saturday’s final clash, Bonbeach took on Rosebud at Rosebud Recreation Reserve. Both sides looked evenly matched throughout the contest, with the lead only standing at one point in Rosebud’s favour at the three-quarter time break. Rosebud ran over the top of Bonbeach in the final quarter, registering nine scoring shots to three in a completely one sided showing. With a dominant final term, Rosebud secured their third win for the season running out 8.11 (59) to 10.11 (71) winners. Thomas Stoffels was again among the best for Rosebud, scoring a game high three goals to help his side to victory.

By Brodie Cowburn RED Hill have secured their fifth consecutive win in MPNFL Division Two football, continuing their rampaging run with a big win over Hastings. Hasting started well and kept in touch with Red Hill in the first quarter, but the game would not stay competitive for much longer. By the three-quarter time break, Red Hill had established a comfortable 32 point lead and put the game to rest. A six goal to one final term only made the pain worse for Hastings as they went down in an uncompetitive clash 7.5 (47) to 17.7 (109). Chris Irving and Jonathon Ross both starred with six goals each for Red Hill, with their side sitting comfortably at fourth spot on the ladder. At Ballam Park Reserve, Karingal flexed their muscle with a dominating victory over Crib Point. A six goal to two first quarter set the tone for a completely one sided game, with Karingal dominating their lowly Crib Point opponents. It was a complete team performance for the Bulls, who had eleven individual goalkickers throughout their side. The win sees Karingal secure second spot on the ladder, as they claimed an astonishing 98 point victory 20.13 (133) to 5.5 (35). At Bunguyan Reserve, 11th placed Tyabb hosted ladder leaders Dromana in a match that looked uncompetitive on paper. Despite coming in as massive underdogs, the Yabbies raised eyebrows by

Slippery when wet: After bursting out of the blocks, Tyabb eventually went down to Dromana. Picture: Andrew Hurst

battling hard in the first term, and they even went into the quarter time break with a narrow one point lead. A shell shocked Dromana came out in the second quarter determined to make amends for their sloppy first term, as they tightened up in defence and held Tyabb scoreless for the quarter. Dromana continued to make life miserable for the Yabbies, who could only manage one more solitary goal for the remainder of the game. Despite the early scare Dromana battled back well to show their quality and secure a comfortable victory away

from home. The final score was 2.11 (23) to 11.11 (77) in Dromana’s favour. Elsewhere at Glover Reserve, Chelsea put on a clinical performance as they continued their good season against Devon Meadows. Devon Meadows looked as if they might send their fans home with smiles on their faces after an impressive first term, going into the first break with a two point lead. After the first break, the Seagulls kicked things up another gear by holding Devon Meadows goalless in the second term. With a comfortable 16 point buffer established, Devon Mead-

ows had been put on the back foot, and they struggled to work their way back into the game. Regular goalkickers Jack Francis and Curtis Bywater contributed for Chelsea with five goals between them, as their side claimed the four points with a 9.8 (62) to 13.11 (89) win. At RJ Rowley Reserve, Rye heaped more misery on a disappointing Pearcedale season by claiming a comfortable 51 point win. Pearcedale looked up to the contest up until half time, as they only trailed by a mere three points at the main break. After half time, Rye quickly put

the game to bed with an impressive five goals to zero third quarter. Rye were a little more competitive in the final term, but could not bounce back from their disappointing third quarter, as they went down to Rye 14.16 (100) to 7.7 (49). Ben Trivett and Leigh Morse were among Rye’s best, as they kicked two goals each in impressive performances. Struggling Pearcedale are set to receive a welcomed boost, with former North Melbourne and West Coast Eagles tall forward Drew Petrie scheduled to play for them in a one off appearance against Devon Meadows at home next Saturday. Pearcedale also recruited Barry Hall for a similar cameo appearance last season. In the final game for the weekend Somerville hosted Langwarrin at Somerville Recreation Reserve. Langwarrin came into the clash full of confidence, coming off a big victory over Tyabb last weekend. Led by star goalkicker Jesse Murphy, they established an early lead and kept Somerville out of reach for most of the day. Murphy booted six goals to take his tally for the year to 46, as his Langwarrin side secured the win 7.12 (54) to 9.12 (66). Langwarrin now sit in sixth place on the ladder after an inconsistent season so far. They sit six points behind fifth placed Hastings, and will need some results to go their way before climbing up the ladder.