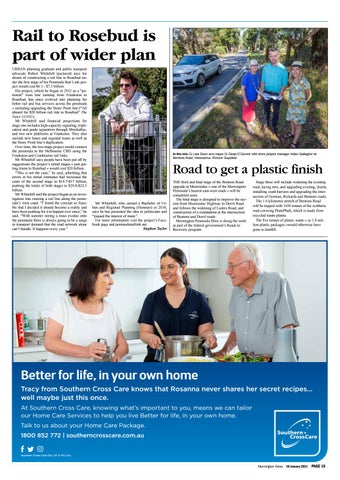 Rail to Rosebud is part of wider plan URBAN planning graduate and public transport advocate Robert Whitehill (pictured) says his dream of constructing a rail line to Rosebud under the first stage of his Peninsula Rail Link project would cost $6.1 - $7.5 billion. His project, which he began in 2012 as a “potential” train line running from Frankston to Rosebud, has since evolved into planning for better rail and bus services across the peninsula – including upgrading the Stony Point line (“All aboard for $20 billion rail ride to Rosebud” The News 11/1/21). Mr Whitehill said financial projections for stage one includes high-capacity signaling, triplication and grade separation through Mordialloc, and two new platforms at Frankston. They also include new buses and regional trains as well as the Stony Point line’s duplication. Over time, the two-stage project would connect the peninsula to the Melbourne CBD using the Frankston and Cranbourne rail links. Mr Whitehill says people have been put off by suggestions the project’s initial stages – just getting trains to Rosebud – would cost $20 billion. “This is not the case,” he said, admitting that errors in his initial estimates had increased the costs of the second stage to $14.7-$17 billion, pushing the totals of both stages to $20.8-$24.5 billion. Mr Whitehill said the project began as an investigation into running a rail line along the peninsula’s west coast. “I found the concept so feasible that I decided it should become a reality and have been pushing for it to happen ever since,” he said. “With summer seeing a mass exodus onto the peninsula there is always going to be a surge in transport demand that the road network alone can’t handle. It happens every year.”

Road to get a plastic finish Mr Whitehill, who earned a Bachelor of Urban and Regional Planning (Honours) in 2018, says he has presented the idea to politicians and “piqued the interest of many”. For more information visit the project’s Facebook page and peninsularaillink.net Stephen Taylor

THE third and final stage of the Bentons Road upgrade at Moorooduc – one of the Mornington Peninsula’s busiest east-west roads – will be completed soon. The final stage is designed to improve the section from Moorooduc Highway to Derril Road and follows the widening of Loders Road, and construction of a roundabout at the intersection of Bentons and Derril roads. Mornington Peninsula Shire is doing the work as part of the federal government’s Roads to Recovery program.

Stage three will include widening the existing road, laying new, and upgrading existing, drains, installing crash barriers and upgrading the intersection of Gorman, Rickards and Bentons roads. The 1.6 kilometre stretch of Bentons Road will be topped with 1450 tonnes of the synthetic road covering PlastiPhalt, which is made from recycled waste plastic. The five tonnes of plastic waste – or 1.8 million plastic packages –would otherwise have gone to landfill.