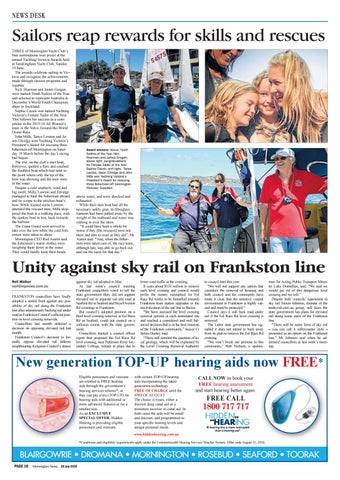 Sailors reap rewards for skills and rescues THREE of Mornington Yacht Clubâ&#x20AC;&#x2122;s four nominations won prizes at the annual Yachting Victoria Awards held at Sandringham Yacht Club, Sunday 19 June. The awards celebrate sailing in Victoria and recognise the achievements made through various programs and regattas. Nick Sharman and James Grogan were named Youth Sailors of the Year and selected to represent Australia at Decemberâ&#x20AC;&#x2122;s World Youth Championships in Auckland. Sophie Ciszek was named Yachting Victoriaâ&#x20AC;&#x2122;s Female Sailor of the Year. This follows her success as a competitor in the 2015-16 All Womenâ&#x20AC;&#x2122;s team in the Volvo Around-the-World Ocean Race. John Mills, Tanya Lawton and Jason Ettridge won Yachting Victoriaâ&#x20AC;&#x2122;s Presidentâ&#x20AC;&#x2122;s Award for rescuing three fishermen off Mornington on Saturday 19 March before the dayâ&#x20AC;&#x2122;s racing had begun. The trio, on the clubâ&#x20AC;&#x2122;s start boat, Retriever, spotted a flare and reached the disabled boat which had sunk to the point where only the tip of the bow was showing and the men were in the water. Despite a cold southerly wind and big swell, Mills, Lawton and Ettridge managed to haul the fisherman aboard and tie a rope to the stricken boatâ&#x20AC;&#x2122;s bow. While trained nurse Lawton attended the rescued men, Mills skippered the boat at a walking pace, with the sunken boat in tow, back towards the harbour. The Coast Guard soon arrived to take over the tow while the cold fishermen were taken to shore. Mornington CEO Rod Austin said the fishermenâ&#x20AC;&#x2122;s warm clothes were weighing them down in the water. They could hardly keep their heads

above water, and were shocked and exhausted. While their new boat had all the necessary safety gear, its fibreglass transom had been pulled away by the weight of the outboard and water was rushing in over the stern. â&#x20AC;&#x153;It could have been a whole lot worse if they [the rescuers] were not there and able to react as they didâ&#x20AC;?, Mr Austin said. â&#x20AC;&#x153;And, when the fishermen were taken care of, the race team, although late, was able to go back out and run the races for that day.â&#x20AC;?

against sky rail adopted in May. At last weekâ&#x20AC;&#x2122;s council meeting Frankston councillors voted to tell the state government tthey did not support elevated rail to separate rail and road at Seaford Rd in Seaford and Skye/Overton Rd crossings in Frankston. But councilâ&#x20AC;&#x2122;s adopted position on a third level crossing removal, at Eel Race Rd in Seaford, could put council on a collision course with the state government. Councillors backed a council officer report that proposed the Eel Race Rd level crossing, near Patterson River Secondary College, remain in place due to

lower road traffic at the crossing. It costs about $150 million to remove each level crossing and council would prefer the money earmarked for Eel Race Rd works to be funnelled towards Frankston train station upgrades or the electrification of the rail line to Baxter. â&#x20AC;&#x153;We have assessed the level crossing removal options at each nominated site and reached a considered and well balanced decision that is in the best interests of the Frankston community,â&#x20AC;? mayor Cr James Dooley said. â&#x20AC;&#x153;There still remains the question of local geology, which will be explained by the Level Crossing Removal Authority

to council later this year. â&#x20AC;&#x153;We will not support any option that considers the removal of housing and both council and the community have made it clear that the sensitive coastal environment in Frankston is highly valued and must be protected.â&#x20AC;? Council says it will back road under rail if the Eel Race Rd level crossing is removed. The Labor state government has signalled it does not intend to back away from its plan to remove the Eel Race Rd crossing. â&#x20AC;&#x153;We wonâ&#x20AC;&#x2122;t break our promise to this community,â&#x20AC;? Bob Neilson, a spokes-

with certain TOP-UP hearing aids incorporating the latest generation technology FREE OF CHARGE until the END OF AUGUST The choice is yours, either a discreet deep canal aid or a miniature receiver in canal aid. In both cases the aids will be small and discreet, and programmed to \RXUVSHFLÂżFKHDULQJOHYHOVDQG unique personal needs. www.hiddenhearing.com.au