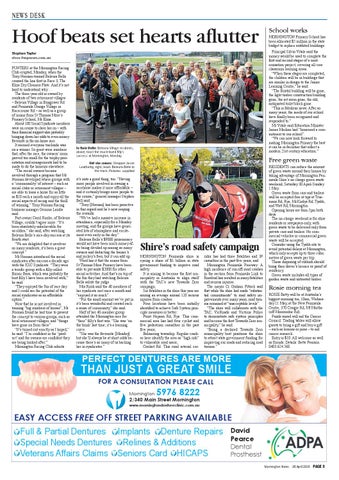 To their Belle: Beleura Village residents, above, toast the much-loved filly’s success at Mornington, Monday.

it’s onto a good thing, too. “Having more people involved in owning a racehorse makes it more affordable – and it certainly brings more people to the course,” general manager Stephen Bell said. “Tony [Noonan] has been proactive in this regard and he’s now reaping the rewards. “We’ve had a massive increase in attendance, especially for a Monday meeting, and the groups have generated lots of atmosphere and excitement even early in the day.” Beleura Belle’s $9000 prizemoney would not have been much money after being divided up among so many owners and deducting the trainer’s and jockey’s fees, but it can add up. Word has it that the mums from St Thomas More Primary have been able to put aside $2000 for other social activities. And that’s on top of the fun they had watching Beleura Belle salute the judge. Mrs Rook said the 40 members of her syndicate met once a month and “enjoyed it so much”. “For the small amount we’ve put in it’s been wonderful and created such a sense of community,” she said. Half of her 40-member group attended the Mornington race for “their” filly’s first win. “She was ‘on the brink’ last time; it’s a learning curve. “She was the favourite [Monday] but she’ll always be at short odds because there’s so many of us backing her in syndicates.”

MORNINGTON Primary School has been allocated $5 million in the state budget to replace outdated buildings. Principal Silvio Vitale said the money would be used to complete the first and second stages of a modernisation project, covering all core classroom learning areas. “When these stages are completed, the children will be in buildings that are similar in design to the Junior Learning Centre,” he said. “The Bristol building will be gone, the light timber construction building gone, the art room gone, the old, antiquated toilet block gone. “This is fabulous news. After so many years, the needs of our school have finally been recognised and responded to.” Mr Vitale said Education Minister James Merlino had “honoured a commitment to our school”. “We can now look forward to making Mornington Primary the best it can be in facilities that reflect a modern 21st century education.”

Stephen Taylor steve@mpnews.com.au PUNTERS at the Mornington Racing Club erupted, Monday, when the Tony Noonan-trained Beleura Belle crossed the line first in Race 3, The Eliza Dry Cleaners Plate. And it’s not hard to understand why … The three-year-old is owned by residents of two retirement villages – Beleura Village in Bungower Rd and Peninsula Grange Village in Racecourse Rd – as well as a group of mums from St Thomas More’s Primary School, Mr Eliza. About 100 Social Syndicate members were on course to cheer her on – with their financial support also probably bringing down her odds to even-money favourite in the six-horse race. It seemed everyone trackside was on a winner. So great were numbers that, after the race, the owners’ room proved too small for the trophy presentation and arrangements had to be made to do the honours elsewhere. “The social owners became involved through a program that Mr Noonan developed where groups with a ‘commonality’ of interest – such as social clubs or retirement villages – are able to lease a horse for as little as $10 each a month and enjoy all the social aspects of racing and the thrill of winning,” Tony Noonan Racing business manager Gemma Lambe said. Part-owner Carol Rooke, of Beleura Village, couldn’t agree more: “It’s been absolutely unbelievable for us oldies,” she said, after watching Beleura Belle’s race-day success at its fourth start. “We are delighted that it involves so many residents; it’s been a great concept.” Mr Noonan introduced the social syndicates after success a decade ago with the KSC Syndicate. “They were a terrific group with a filly called Bionic Bess, which was probably the best filly I have been involved with,” he said. “They enjoyed the fun of race day and I could see the potential of the social syndicates as an affordable option.” Now that he is not involved in training “big numbers of horses”, Mr Noonan found he had time to present the concept to various groups, such as local retirement villages, and “things have gone on from there”. “It’s turned out exactly as I hoped,” he said. “I’m confident in the ‘product’ and the owners are confident they are being looked after.” Mornington Racing Club admits

Shire’s road safety campaign MORNINGTON Peninsula shire is eyeing a share of $1 billion in state government funding to improve road safety. It is aiming to become the first municipality in Australia to align itself with the TAC’s new Towards Zero campaign. Six fatalities in the shire this year are among an average annual 120 serious injuries from crashes. Four locations have been initially identified to achieve Safe System principle measures or better: Point Nepean Rd, Rye: This commercial area has had four cyclist and five pedestrian casualties in the past five years; Balnarring township: Regular crashes here identify the area as “high risk” to vulnerable road users; Coolart Rd: This rural arterial cor-

ridor has had three fatalities and 39 casualties in the past five years, and Mornington Peninsula Freeway: A high incidence of run-off-road crashes in the section from Peninsula Link to Rosebud has resulted in many fatalities and serious injuries. The mayor Cr Graham Pittock said that while the shire had made “substantial commitments” to road safety improvements over many years, road trauma remained at “unacceptable levels”. “The shire will collaborate with the TAC, VicRoads and Victoria Police to demonstrate safe system principles and become the first Towards Zero municipality,” he said. “Being a declared Towards Zero municipality best positions the shire to attract state government funding for improving our roads and reducing road trauma.”

RESIDENTS can reduce the amount of green waste around their homes by taking advantage of Mornington Peninsula Shire’s no charge green waste weekend, Saturday 30 April-Sunday 1 May. Green waste from cars and trailers will be accepted free at tips at Truemans Rd, Rye, McKirdys Rd, Tyabb, and Watt Rd, Mornington. Opening hours are 8am-5pm both days. The no-charge weekend is for shire residents or ratepayers only, with green waste to be delivered only from private cars and trailers. No commercial vehicles or commercial green waste will be accepted. Consider using the Tyabb site to avoid potential delays at Mornington, which only accepts up to three cubic metres of green waste per trip. Those disposing of rubbish should bring their driver’s licence or proof of residency. Green waste includes all types of garden waste and untreated timber.

Rosie morning tea ROSIE Batty will be at Australia’s biggest morning tea, 10am, Wednesday 11 May, at the New Peninsula Centre, 370 Craigie Rd, Mt Martha (off Moorooduc Rd). Funds raised will aid the Cancer Council. Trading tables will allow guests to bring a gift and buy a gift – such as lemons or jams – to aid cancer research. Entry is $10. All welcome as well as friends. Details: Bette Pearson 0403 624 568.

THAN JUST A GREAT SMILE FOR A CONSULTATION PLEASE CALL Mornington