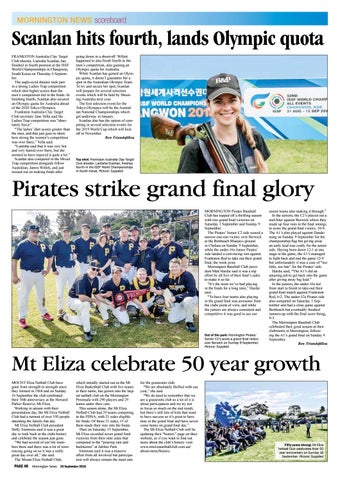 Scanlan hits fourth, lands Olympic quota FRANKSTON Australia Clay Target Club shooter, Laetisha Scanlan, has finished in fourth position at the ISSF World Championships in Changwon, South Korea on Thursday 6 September. The eagle-eyed shooter took part in a strong Ladies Trap competition which shot higher scores than the men’s competition did in the finals. In finishing fourth, Scanlan also secured an Olympic quota for Australia ahead of the 2020 Tokyo Olympics. Frankston Australia Clay Target Club secretary Jane Vella said the Ladies Trap competition was “absolutely fierce”. “The ladies’ shot scores greater than the men, and that just goes to show how strong the women’s competition was over there,” Vella said. “Laetisha said that it was very hot and very humid over there, but she seemed to have enjoyed it quite a lot.” Scanlan also competed in the Mixed Trap competition alongside fellow Australian, James Willett, and just missed out on making finals after

going down in a shoot-off. Willett happened to also finish fourth in the men’s competition, also gaining an Olympic quota for Australia. While Scanlan has gained an Olympic quota, it doesn’t guarantee her a spot in the Australian Olympic Team. To try and secure her spot, Scanlan will prepare for several selection events which will be held by Shooting Australia next year. The first selection event for the Tokyo Olympics will be the Australian National Championships which get underway in January. Scanlan also has the option of competing in several selection events for the 2019 World Cup which will kick off in November. Ben Triandafillou

Pirates strike grand final glory MORNINGTON Pirates Baseball Club has topped off a thrilling season with two grand final victories on Saturday 1 September and Sunday 9 September. The Pirates’ Senior C2 side scored a narrow one-run victory over Berwick at the Bonbeach Bluejays ground in Chelsea on Sunday 9 September, while the under-16s Junior Pirates’ side landed a convincing win against Frankston Red to take out their grand final, the week prior. Mornington Baseball Club president Matt Hardie said it was a top effort by all five of their final’s sides to make it so far. “It’s the most we’ve had playing in the finals for a long time,” Hardie said. “To have four teams also playing in the grand final was awesome from the clubs point of view, and while the juniors are always consistent and competitive it was good to see our

Out of the park: Mornington Pirates’ Senior C2’s score a grand final victory over Berwick on Sunday 9 September. Picture: Supplied

senior teams also making it through.” In the seniors, the C2’s played out a nail-biter against Berwick where they made up four runs in the final innings to score the grand final victory, 10-9. The A1’s also played against Dandenong on Sunday 9 September for the championship flag but giving away an early lead was costly for the senior side. Having been down 12-1 at one stage in the game, the A1’s managed to fight back and end the game 12-9 but unfortunately it was a case of “too little, too late” for the Pirates’ side. Hardie said, “The A1’s did an amazing job to get back into the game after giving away big lead.” In the juniors, the under-16s led from start to finish to take-out their grand final match against Frankston Red, 6-2. The under-12s Pirates side also competed on Saturday 1 September and had a close game against Bonbeach but eventually finished runners-up with the final score being, 9-3. The Mornington Baseball Club celebrated their great season at their clubrooms in Mornington, following the A1’s grand final on Sunday 9 September. Ben Triandafillou

which initially started out as the Mt Eliza Basketball Club with five teams to their name, has grown into the largest netball club on the Mornington Peninsula with 290 players and 29 teams under their care. This season alone, the Mt Eliza Netball Club had 29 teams competing in the FDNA, with 21 sides eligible for finals. Of those 21 sides, 15 of them made their way into the finals. Then on Saturday 15 September, Mt Eliza recorded seven grand final victories from their nine sides that competed in the “pouring rain and hailstorms” at Jubilee Park. Simmons said it was a massive effort from all involved but participation will always remain the main aim

for the grassroots club. “We are absolutely thrilled with our year,” she said. “We do need to remember that we are a grassroots club so a lot of it is about participation and we try not to focus so much on the end result, but there’s still lots of kids that want to have success so it’s great to have nine in the grand final and have seven come home on grand final day.” The Mt Eliza Netball Club will be updating their “history” page on their website, so if you want to find out more about the club’s history visit: www.mtelizanetballclub.com.au/ about-menc/history.