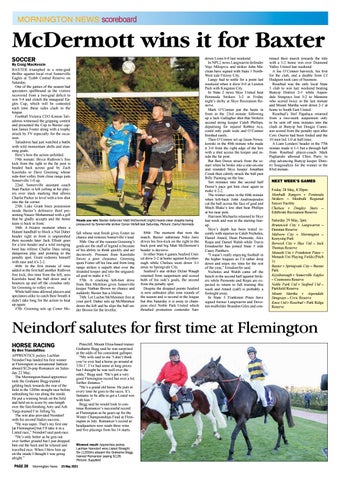 McDermott wins it for Baxter SOCCER

By Craig MacKenzie BAXTER triumphed in a nine-goal thriller against local rival Somerville Eagles at Tyabb Central Reserve on Saturday. One of the games of the season had spectators spellbound as the visitors recovered from a two-goal deficit to win 5-4 and clinch the inaugural Eagles Cup, which will be contested each time these sides clash in the league. Football Victoria CEO Kimon Taliadoros witnessed the gripping contest and presented the Cup to Baxter captain James Foster along with a trophy struck by FV especially for the occasion. Taliadoros had just watched a battle with wild momentum shifts and stunning goals. Here’s how the action unfolded. 19th minute: Bryce Ruthven’s free kick from the right to the far post is headed back across goal by Zach Karolidis to Dave Greening whose side-foot volley from close range puts Somerville 1-0 up. 22nd: Somerville assistant coach Stan Packer is left yelling at his players over slack marking that allows Charlie Parker to level with a low shot into the far corner. 25th: Luke Grant loses possession inside Baxter’s defensive third presenting Naseer Mohammad with a gift that he gladly accepts and the home team is back in front. 34th: A bizarre moment where a blatant handball to block a Nat Daher header right in front is unpunished then seconds later Jack Elliott goes for a low header and a wild swinging boot has referee Charlie Dass ruling dangerous play and pointing to the penalty spot. Grant redeems himself with ease and it’s 2-2. 46th: In the first minute of time added in the first half another Ruthven free kick, this time from the left, sees Karolidis head the ball down and it bounces up and off the crossbar only for Greening to volley over. While half-time allowed players and spectators alike to catch their breath it didn’t take long for the action to heat up again. 47th: Greening sets up Conor Mc-

fall whose neat finish gives Foster no chance and restores Somerville’s lead. 50th: One of the reasons Greening’s goals are the stuff of legend is because of his ability to think quickly and act decisively. Pressure from Karolidis forces a poor clearance. Greening spots Foster off his line and from long range strikes a superb shot over the stranded keeper and into the unguarded goal to make it 4-2. 57th: A cracking left-foot drive from Ben Meiklem gives Somerville keeper Nathan Brown no chance and suddenly Baxter has a lifeline. 74th: Let Lachie McMinimee free at your peril. Daher sets up McMinimee down the left and he slips the ball under Brown for the leveller.

84th: The moment that won the match. Baxter substitute Niko Juric drives his free-kick on the right to the back post and big Matt McDermott’s header is decisive. In other State 4 games Seaford United drew 2-2 at home against Keysborough while Chelsea went down 3-1 away to Springvale City. Seaford’s star striker Dylan Waugh returned from suspension and scored both of his side’s goals, the second from the penalty spot. Despite the dropped points Seaford is now unbeaten after nine rounds of the season and is second in the league but this Saturday it is away to champion elect Noble Park United which thrashed promotion contender San-

down Lions 6-0 last weekend. In NPL2 news Langwarrin defender Vojo Milojevic and striker John Maclean have signed with State 1 NorthWest side Fitzroy City. Langy had to settle for a point last weekend when it drew 0-0 at Lawton Park with Kingston City. In State 2 news Skye United beat Peninsula Strikers 3-2 in Friday night’s derby at Skye Recreation Reserve. Mark O’Connor put the hosts in front in the 23rd minute following up a Jack Gallagher shot that Strikers second string keeper Caleb Phillips, deputising for injured Robbie Acs, could only push wide and O’Connor finished easily. Then O’Connor set up Jason Nowakowski in the 40th minute who made it 2-0 from the right edge of the box with a shot across the keeper and inside the far post. But Ben Doree struck from the restart when he broke into a one-on-one and rounded Skye keeper Jonathan Crook then calmly struck the ball past Billy Painting on the line. Ten minutes into the second half Doree’s pace got him clear again to make it 2-2. The winner came in the 60th minute when left-back John Andrinopoulos cut the ball across the face of goal and Mitch Blake’s low shot beat Phillips at his near post. Harrison Michaelis returned to Skye last week and was in the starting lineup. Skye’s depth has been tested recently with injuries to Caleb Nicholes, Daniel Attard, Dean Piemonte, Alex Rojas and Daniel Walsh while Travis Ernsdoerfer has joined State 5 side Casey Panthers. “I wasn’t really enjoying football in the higher leagues so I’d rather drop down and enjoy my time for the rest of the year,” Ernsdoerfer said. Nicholes and Walsh came off the bench in the second half against Strikers while Piemonte and Rojas are expected to return to full training this week and Attard (calf) is probably a fortnight away. In State 3 Frankston Pines have signed former Langwarrin and Doveton midfielder Brandon Giles and con-

By Ben Triandafillou APPRENTICE jockey Lachlan Neindorf has landed his first winner at Flemington in sensational fashion aboard $126-pop Romancer on Saturday 22 May. The Mornington-based apprentice took the Grahame Begg-trained gelding back towards the rear of the field in the 1200m straight race before unleashing his run along the inside. He put a winning break on the field and held on to score by one-length over the fast-finishing Amy and Ash Yargi-trained I’m Telling Ya. The win also provided Neindorf with his second Stakes success. “He was super. That’s my first one [at Flemington] but I’ll take it in a Listed race,” Neindorf said post-race. “He’s only better as he gets out over further ground but I just dropped him out the back and he relaxed and travelled nice. When I blew him up on the inside I thought I was going alright.”

Pinecliff, Mount Eliza-based trainer Grahame Begg said he was surprised at the odds of his consistent galloper. “My wife said to me ‘I don’t think you’ve ever had a horse go around at 150-1’. I’ve had some at long prices but I thought he was well over the odds,” Begg said. “He’s got a very good Flemington record but over a bit further distance.” “He’s a grand old horse. He puts in every time he goes to the races. It’s fantastic to be able to get a Listed win with him.” Begg said he would look to continue Romancer’s successful record at Flemington as he gears up for the Winter Championships Final at Flemington in July. Romancer’s record at headquarters now reads three wins and five placings from his 14 starts.