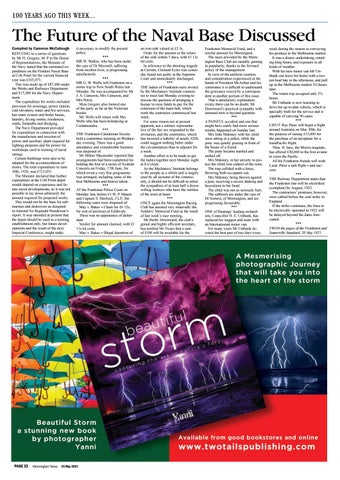 The Future of the Naval Base Discussed Compiled by Cameron McCullough REPLYING to a series of questions by Mr H. Gregory, M. P in the House of Representatives, the Minister of the Navy stated that the estimated expenditure on the Flinders Naval Base at Crib Point for the current financial year was £105,075. This was made up of £87,486 under the Works and Railways Department and £17,589 for the Navy Department. The expenditure for works included provision for sewerage, power station, coal elevators, water and fire services, hot water system and boiler house, laundry, drying rooms, residences, roads, footpaths and dredging. The Navy Department provided for expenditure in connection with the manufacture and erection of power and auxiliary plant required for lighting purposes and for power for workshops used in training of naval ratings. Certain buildings were also to be adapted for the accommodation of mines. The total expenditure to June 30th, 1920, was £723,055. The Minister declared that further expenditure at the Crib Point depot would depend on experience and future naval developments, so it was not possible to lay down arbitrarily the amount required for proposed works. This would not be the base for submarines and destroyers as designed in Admiral Sir Reginald Henderson’s report. It was intended at present that the depot should be used as a training establishment only, but future developments and the result of the next Imperial Conference, might make

it necessary to modify the present policy. *** MR W. Walker, who has been under the care of Dr Maxwell, suffering from swollen liver, is progressing satisfactorily. *** MR G. W. Wells, left Frankston on a motor trip to New South Wales last Monday. He was accompanied by Mr J. A. Cameron, Mrs Cameron, and Mrs Petrie. Miss Gregory also formed one of the party as far as the Victorian border. Mr. Wells will return with Mrs Wells who has been holidaying at Cootamundra. *** THE Frankston Caledonian Society held a committee meeting on Wednesday evening. There was a good attendance and considerable business was disposed of. Mr Milner Macmaster reported that arrangements had been completed for holding the first of a series of Scottish Concerts on Friday, 17th June, for which event a very fine programme was arranged, including some of the best Melbourne and district talent. *** AT the Frankston Police Court on Monday last, before Cr W. P. Mason and Captain S. Sherlock, J’s.P., the following cases were disposed of: May v. Baker – Claim for £6 12s, for rent of premises at Edithvale. There was no appearance of defendant. Verdict for amount claimed, with £1 11s 6d costs. May v. Baker – Illegal detention of

an iron sink valued at £3 3s. Order for the amount or the return of the sink within 7 days, with £1 11s 6d costs. In reference to the shooting tragedy at Carrum, Clement Eyles was yesterday found not guilty at the Supreme Court and immediately discharged. *** THE ladies of Frankston were invited by the Mechanics’ Institute committee to meet last Monday evening to discuss the question of arranging a bazaar to raise funds to pay for the extension of the main hall, which work the contractor commenced last week. For some reason not at present apparent, not a solitary representative of the fair sex responded to the invitation, and the committee, which has incurred a liability of nearly £200, could suggest nothing better under the circumstances than to adjourn for a week. Another effort is to be made to get the ladies together next Monday night at 8 o’clock. As the Mechanics’ Institute belongs to the people as a whole and is largely used by all sections of the community, it should not be difficult to enlist the sympathies of at least half a dozen willing workers who have the welfare of the town at heart. *** ONCE again the Mornington Racing Club has assisted very materially the Soldiers’ Memorial Fund as the result of last week’s race meeting. Mr Herbt. Downward, the club’s genial and highly efficient secretary, has notified Mr Vicars that a sum of £100 will be available for the

Frankston Memorial Fund, and a similar amount for Mornington. The races provided by the Mornington Race Club are steadily gaining in popularity, thanks to the forward policy of the management. In view of the uniform courtesy and consideration experienced at the hands of President McArthur and his committee it is difficult to understand the grievance voiced by a correspondent in another portion of this issue. That a satisfactory explanation exists, there can be no doubt. Mr Downward’s practical sympathy with returned men is beyond question. *** A PAINFUL accident and one that might have easily had more serious results, happened on Sunday last. Mrs John Maloney with her child were sitting in a jinker, while the pony was quietly grazing in front of the house of a friend. The pony became startled and rushed off. Mrs Maloney, in her anxiety to protect the child, lost control of the reins. The trap collided with a fence, throwing both occupants out. Mrs Maloney being thrown against a post, receiving a severe shaking and lacerations to her head. The child was not so seriously hurt. The sufferers are under the care of Dr Somers, of Mornington, and are progressing favourably. *** ONE of Hastings’ leading orchardists, Councillor H. E. Unthank, has replaced his waggon and team with an Internationial motor van. For many years Mr Unthank devoted the best part of two days every

week during the season in conveying his produce to the Melbourne market. It was a dreary undertaking, entailing long hours, and exposure to all kinds of weather. With his new motor van Mr Unthank can leave his home with a two ton load late in the afternoon, and pull up in the Melbourne market 3½ hours later. The return trip occupied only 2½ hours. Mr Unthank is now learning to drive his up to-date vehicle, which is specially built for the service and is capable of carrying 90 cases. *** LIEUT. Ray Parer will begin a flight around Australia on May 30th, for the purpose of raising £15,000 for the purchase of an aeroplane for a transPacific flight. Thos. H. Ince, the Morris magnate, has offered £30,000 to the first aviator to cross the Pacific. All his Frankston friends will wish Lieut. Parer a safe flight – and success. *** THE Railway Department states that the Frankston line will be electrified (complete) by August, 1922. The contractors’ promises, however, were cabled before the coal strike in England. If the strike continues, the lines to be electrically operated in 1922 will be delayed beyond the dates forecasted. *** FROM the pages of the Frankston and Somerville Standard, 20 May 1921