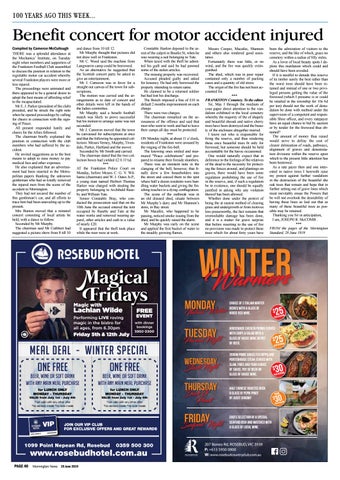 Benefit concert for motor accident injured and dance from 10 till 12. Mr Murphy thought that pictures did not draw well in Frankston. Mr C. Wood said the machine from Langwarrin camp could be borrowed. As an alternative he suggested that the Scottish concert party be asked to give an entertainment. Mr J. Cameron was in favor for a straight out canvas of the town for subscriptions. The motion was carried and the arrangements as to date of concert and other details were left in the hands of the ladies committee. Mr Murphy said a benefit football match was likely to prove successful but his motion to arrange same was not seconded. Mr J. Cameron moved that the town be canvassed for subscriptions at once and that the following be appointed collectors: Messrs Verney, Murphy, Tivendale, Parker, Hartland and the mover. Seconded by Mr Smith and carried. The chairman stated that the two collection boxes had yielded £2 0.11½d. *** AT the Frankston Police Court on Monday, before Messrs C. G. V. Williams (chairman) and W. J. Oates Js.P., a young man named Herbert Thomas Harker was charged with stealing the property belonging to Archibald Raseby and William Tute. Senior Constable Bray, who conducted the prosecution said that on the 10th June the accused entered the tent occupied by Raseby and Tute at the water works and removed wearing apparel, other articles and cash to a value of nearly £20. It appeared that the theft took place while the men were at work.

Compiled by Cameron McCullough THERE was a splendid attendance at the Mechanics’ Institute, on Tuesday night when members and supporters of the Frankston Football Club assembled to discuss the position in relation to the regretable motor car accident whereby several Frankston players were more or less injured. The proceedings were animated and there appeared to be a general desire to adopt the best means of affording relief to the incapacitated. Mr E. J. Parker (president of the club) presided, and he struck the right note when he opened proceedings by calling for cheers in connection with the signing of Peace. All present responded lustily and cheers for the Allies followed. The chairman briefly explained the position in connection with the club members who had suffered by the accident. He invited suggestions as to the best means to adopt to raise money to pay medical fees and other expenses. He also explained that an advertisement had been inserted in the Metropolitan papers thanking the unknown gentleman who had so kindly removed the injured men from the scene of the accident to Mornington. They had not secured the number of this gentleman’s car, and all efforts to trace him had been unavailing up to the present. Mrs Burton moved that a minstrel concert consisting of local artists be held, with a dance to follow. Seconded by Mr Murphy. The chairman said Mr Cuthbert had suggested a picture show from 8 till 10

Constable Hanlon deposed to the arrest of the culprit in Bourke St, when he was wearing a suit belonging to Tute. When taxed with the theft he admitted his guilt and said he had pawned some of the stolen articles. The missing property was recovered. Accused pleaded guilty and asked for leniency. He had only borrowed the property intending to return same. He claimed to be a returned soldier but had lost his discharge. The Bench imposed a fine of £10 in default 2 months imprisonment on each charge. There were two charges. The chairman remarked on the seriousness of the offence and said that men who went to work and had to leave their camps all day must be protected. *** ON Monday night, at about 11 o’clock, residents of Frankston were aroused by the ringing of the fire-bell. The knowing ones smiled and murmured “Peace celebrations” and prepared to resume their fireside slumbers. There was an insistent note in the clanging of the bell, however, that finally drew a few householders into the street and coaxed them to the spot where half a dozen residents were handling water buckets and giving the finishing touches to a dying conflagration. The scene of the outbreak was in an old disused shed, situate between Mr Murphy’s dairy and Mr Shannon’s store, in Bay street. Mr Macafee, who happened to be passing, noticed smoke issuing from the shed, and he quickly raised the alarm. Mr Murphy was early on the scene and applied the first bucket of water to the steadily growing flames.

Messrs Cooper, Macafee, Shannon and others also rendered good assistance. Fortunately there was little, or no wind, and the fire was quickly extinguished. The shed, which was in poor repair contained only a number of packing cases and a quantity of old straw. The origin of the fire has not been accounted for. *** FRANKSTON Cemetery. To the editor. Sir, May I through the medium of your paper direct attention to the vandalism exhibited in the local cemetery whereby the majority of the of shapely and beautiful sheoak and native cherry trees have been destroyed and the beauty of the enclosure altogether marred. I know not who is responsible for firing the reserve, and thus rendering these once beautiful trees fit only for firewood, but someone should be held accountable for the havoc occasioned. One would naturally expect that in deference to the feelings of the relatives of the dead to the necessity for protecting the fences around, and plantings on graves, there would have been some regulation prohibiting the use of fire in the reserve, and, if such a regulation be in existence, one should be equally justified in asking why any violation thereof has been allowed. Whether done under the pretext of being the at easiest method of clearing grass and undergrowth or from motives less praiseworthy, the fact remains that irremediable damage has been done, and it is a matter for grave surprise that before resorting to the use of fire no provision was made to protect these trees which for about forty years have

been the admiration of visitors to the reserve, and the like of which, grace no cemetery within a radius of fifty miles. As a lover of local beauty spots I deplore this mutilation which could and should have been avoided. If it is needful to denude this reserve of its timber surely the best rather than the worst trees should have been retained and instead of one or two privileged persons getting the value of the firewood (which I presume is or could be retailed in the township for 10s 6d per ton) should not the work of denudation be done with method under the supervision of a competent and responsible Shire officer, and every ratepayer have an equal chance to bid by auction or by tender for the firewood thus obtained? The amount of money thus raised would serve to defray the cost of clearer delineation of roads, pathways, alignment of graves and denomination divisions within the reserve upon which to the present little attention has been bestowed. As a rate payer then and one interested in native trees I herewith raise my protest against further vandalism in the destruction of the beautiful she oak trees that remain and hope that in further setting out of grave lines which must inevitably ensue the Powers that be will not overlook the desirability of having these lines so laid out that as many of these beautiful trees as possible may be retained. Thanking you Sir in anticipation, I am, JOSEPH R. McCOMB . *** FROM the pages of the Mornington Standard, 28 June 1919

Performing LIVE roving magic in the bistro for all ages, from 6.30pm

Beer, Wine or Soft Drink with any main meal purchase

Beer, Wine or Soft Drink with any main meal purchase

for LUNCH ONLY MONDAY - THURSDAY

for LUNCH ONLY MONDAY - THURSDAY

Choice of 2 Italian Winter Dishes with a glass of House Red wine.

Housemade Chicken Parma served with chips &amp; salad with a glass of House Wine or Pot $ of Beer. son er per p

Chefs selection of a special seafood dish and matched with a glass of local wine.