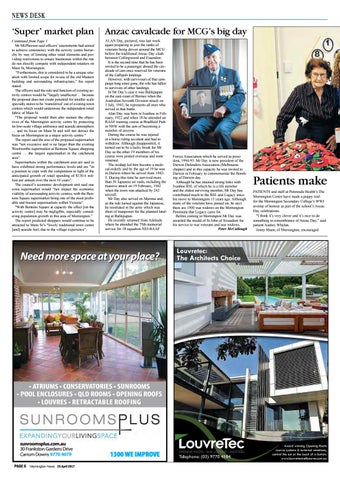 Continued from Page 1 Mr McPherson said officers’ assessments had aimed to achieve consistency with the activity centre hierarchy by way of limiting other retail elements and providing restrictions to ensure businesses within the site do not directly compete with independent retailers on Main St, Mornington. “Furthermore, this is considered to be a unique situation with limited scope for re-use of the old Masters building and surrounding infrastructure,” his report stated. The officers said the role and function of existing activity centres would be “largely unaffected … because the proposal does not create potential for smaller scale specialty stores to be ‘transferred’ out of existing town centres which would undermine the independent retail fabric of Main St. “The proposal would then also sustain the objectives of the Mornington activity centre by protecting its low-scale village ambience and seaside atmosphere … and its focus on Main St and will not detract the focus on Mornington as a major activity centre.” The report said the size of the proposed supermarket was “not excessive and is no larger than the existing Woolworths supermarket at Bentons Square shopping centre … the largest supermarket in the catchment area”. Supermarkets within the catchment area are said to have exhibited strong performance levels and are “in a position to cope with the competition in light of the anticipated growth of retail spending of $130.6 million per annum over the next 10 years”. The council’s economic development unit said one extra supermarket would “not impact the economic viability of surrounding activity centres, with the Bentons Square supermarket being one of the most profitable and busiest supermarkets within Victoria”. “With Bentons Square at capacity the effect [on the activity centre] may be negligible, especially considering population growth in this area of Mornington.” The report predicted shoppers would continue to be attracted to Main St’s “lovely traditional town centre [and] seaside feel, due to the village experience”.

ALAN Day, pictured, was last week again preparing to join the ranks of veterans being driven around the MCG before the traditional Anzac Day clash between Collingwood and Essendon. It is the second time that he has been invited to be a passenger aboard the cavalcade of cars once reserved for veterans of the Gallipoli landings. However, with survivours of that campaign long since gone, the role has fallen to survivors of other landings. In Mr Day’s case it was Balikpapan on the east coast of Borneo when the Australian Seventh Division struck on 1 July, 1945; he represents all men who served in that battle. Alan Day was born in Ivanhoe in February, 1922 and when 18 he attended an RAAF training course at Bradfield Park in NSW with the aim of becoming a member of aircrew. During the course he was injured in a horse riding accident and had to withdraw. Although disappointed, it turned out to be a lucky break for Mr Day as the other 19 members of his course were posted overseas and none returned. The mishap led him become a medical orderly and by the age of 19 he was in Darwin where he served from 19425. During this time he survived more than 50 Japanese air raids, including the massive attack on 19 February, 1942 when the town was attacked by 242 aircraft. Mr Day also served on Morotai and, as the tide turned against the Japanese; he reenlisted in the army which was short of manpower for the planned landing at Balikpapan. He recently returned from Adelaide where he attended the 75th memorial service for 18 squadron NEI-RAAF

Forces Association which he served as president, 1994-95. Mr Day is now president of the Darwin Defenders Association (Melbourne chapter) and in this capacity he was invited to Darwin in February to commemorate the Bombing of Darwin day. Although he has retained strong links with Ivanhoe RSL of which he is a life member and the oldest surviving member, Mr Day has contributed much to the RSL and Legacy since his move to Mornington 15 years ago. Although many of the veterans have passed on, he says there are 1500 war widows on the Mornington Peninsula that Legacy cares for. Before coming to Mornington Mr Day was awarded the medal of St John of Jerusalem for his service to war veterans and war widows. Peter McCullough

Patients make PATIENTS and staff at Peninsula Health’s The Mornington Centre have made a poppy trail for the Mornington Secondary College’s WWI avenue of honour as part of the school’s Anzac Day celebrations. “I think it’s very clever and it’s nice to do something in remembrance of Anzac Day,” said patient Audrey Whelan. Jenny Mann, of Mornington, encouraged